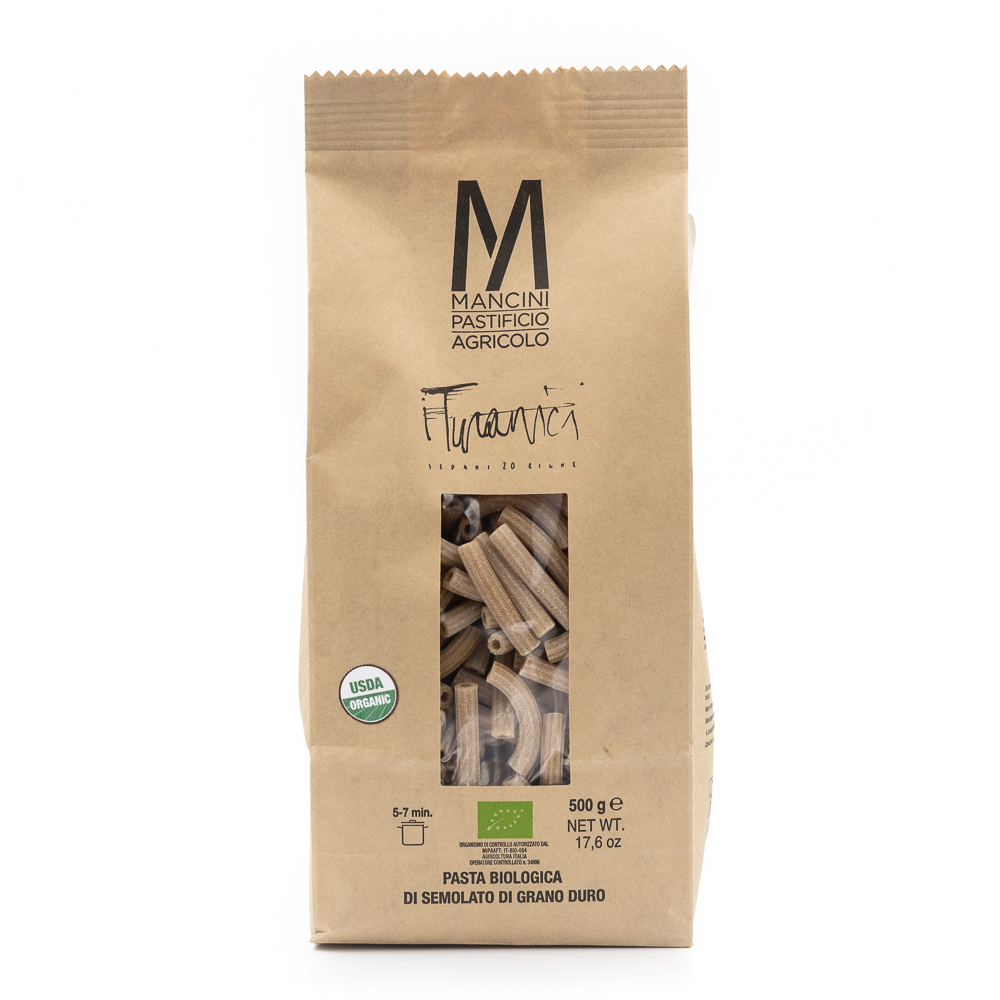 It’s been a couple years since I first tasted the pasta of the Mancini family. I was pulled in immediately by the story behind it. The folks at Mancini are growing all their own wheat, which makes their pasta one of the only “farmstead,” or single-estate, pastas I know of. The family farm was founded by Mariano Mancini in the early 1940s, and from the beginning he was devoted to the land and to growing great wheat. His work, his values, and his beliefs have had a huge influence on the business today. As his grandson Massimo says, “There are many kinds of stories and Grandfather Mariano’s was surely written on the land. Our pasta factory has its roots in the middle of his wheat fields. His example was for me the seed from which everything started.”

Mancini is located in the Marche, about halfway up the east coast of Italy. Although the region is relatively small, it’s the third-largest durum wheat producer in Italy after Puglia and Sicily. The Mancinis do all the things we would want to: diligent crop rotation to maintain soil health, no pesticides, holding the harvested wheat in its natural husk, and milling only onsite. When the time has come to turn it into pasta, they do slow, cold water mixing, extrude through old-style bronze dies, and then dry really slowly (as with all our other favorites). Because they grow the grain onsite themselves, the pasta gets the same sort of year-to-year, vintage-to-vintage variability you would expect from a fine wine.

While all that is wonderful, I’ll admit we already had half a dozen other artisan pastas I was very loyal to, so I can’t say I was really looking for another one. Martelli, Rustichella, Gentile—all are excellent, and I eat and appreciate them regularly. Still, I took home some samples of the Mancini—never hurts to taste, right?—and cooked it up. As advertised, it was stellar. Doubting myself, as I often do the first time I taste something that terrific, I tried it again. With each bite I was more impressed. The flavor is subtly fuller; the texture slightly more substantial—you really can taste the difference. We decided to bring it into the Deli, which means that Mancini, in all its forms, is now on regular rotation at our house. My favorite cut is the Mezze Maniche, meaning “short sleeves”—inch-long tubettes of pasta that we’ve eaten at our house countless times now over the last few years.

A few months ago we got something particularly special from the Mancinis. It’s called Turanici, a pasta made from a very old wheat variety, variously known elsewhere as Khorosan, that originates in the region of the same name in what is now Iran. The wheat is old school—it grows better in poor soil, requires relatively little intervention and input from the farmer, and hence is well suited to being grown organically. The stalks of the Khorosan are much taller than typical modern wheat, with long black awns which make it harder to harvest, and the wheat is about two to three times larger than modern wheat. It has very soft glutens which make the pasta’s texture slightly softer. In Turkey, Khorosan is sometimes called “the prophet’s wheat” because of the legend that Noah brought a bit of it on the ship with him to survive the flood.

Big though its flavor is, the Khorosan is only a small, and relatively recent, part of the Mancini’s work. Long-time staffer Claudio Marcantoni says, “At the moment we are growing thirty to thirty-five hectares of Turanicum wheat. This year we harvested about thirty tons. The Turanici pasta amounts to only about two to three percent of what we produce.” For the Turanici pasta, the Mancini’s grain is stone ground. Like all good pasta, you’ll smell the aroma while you’re cooking and it will fill your whole kitchen with a wonderful wheatiness. If you cook it up, you’ll find the flavor is quite nutty. Because of the softness of the flour, the Turanici cooks relatively quickly for an artisan pasta—five to eight minutes. Be careful not to overcook—it goes quickly. I made it the other evening with sautéed seasonal cauliflower and peppers and topped with plenty of grated Parmigiano.

If you’re looking for something special to serve, a taste of centuries past, made by a small company that cares deeply about the world today, pick up a bag or two of the Turanici at the Deli this week! And be sure to check out our pasta cooking tips.