The Story of Our Deli

The Story of Our Deli

What is Zingerman’s anyway?

It started with a small deli but it has obviously grown way beyond that. For nearly 30 years now our emphasis on education, flavor, tradition, and the integrity of ingredients has helped create a living culinary laboratory where customers can experience everything from corned beef and noodle kugel to estate-bottled Tuscan olive oil to terrific grits from South Carolina. We sell tons of brisket, thousands of hand-shaped traditionally made, Bakehouse bagels, and many thousands of Magic Brownies every year. At the Deli and Roadhouse we serve complete meals to customers from all walks of life every week. We’re also local artisan producers — Zingerman’s Bakehouse makes traditional bread and pastries; the Creamery crafts fresh cheeses; the Coffee Company sells carefully roasted beans; and the Candy Manufactory makes some pretty amazing old-fashioned candy bars! Zingerman’s Mail Order ships it all to food lovers across the country. 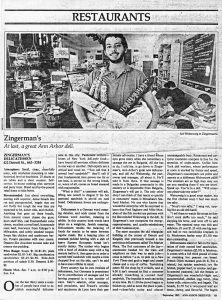 Finding food is hardly all we do here. From the start, it’s been our sincere hope that Zingerman’s will always be a place where people will leave having had a rewarding and really positive experience. The kind of spot where folks who’ve never heard of hundred-year-old balsamic vinegar, Nashville hot (as in super-spicy) fried chicken, chess pie, rye, or handmade harissa can come and taste these things for themselves. An organization in which new staff members can relatively quickly become veritable experts. Whether it’s hot corned beef, home-cooked chicken broth, well-aged wheels of mountain Gruyere, or really good loaves of hearth-baked French mountain bread, we want to bring as much traditional food to as many people as we possibly can.

Given all the good press we’ve had and the number of visitors for whom we’ve become a destination, I guess it’s safe to say that Zingerman’s has become an Ann Arbor institution. Our local customers come in regularly—many every day. People who’ve moved away make return trips just for the Zingerman’s experience. Many who’ve left Michigan will still make meals out of our food by using our catalog-based mail order business or website. Others come back to take classes at BAKE!, or to learn about business approaches in our ZingTrain seminars. Our guests tell us that most anywhere they go, once they tell people they’re from Ann Arbor the odds are that the person will respond by talking about one of two landmarks: either the University of Michigan or Zingerman’s.

The initial idea for what started as Zingerman’s Delicatessen came up in casual conversation with my now-partner Paul Saginaw. We were probably out having a beer after work one night — Paul Saginaw was the general manager of a restaurant where I was washing dishes back in the spring of 1978. Despite the fact that any HR expert would have called us a mismatch because we occupied opposite ends of the org chart when we met, we were actually sort of a match made in the world of food business idealism. We spent many an evening discussing what we would do if we had our own place and weren’t weighed down by the less than super-high standards set by the folks for whom we were working. We talked regularly about how we could build a business that would bring potato pancakes, chicken soup, goat cheese, smoked salmon, and other very special foods to a town that really didn’t have much of that sort of thing. And of how we could do it in a way that was unique to us, something special.

In 1979 Paul left the restaurant where we worked and, along with a partner, Mike Monahan, opened a fish market inside a converted feed and seed store (Kerrytown Market & Shops) beside the Ann Arbor Farmer’s Market. He and I continued to share a pretty wide range of food and business fantasies, but the one idea that stuck with us more than any other was to start a delicatessen. We’d both grown up eating Jewish food—he in Detroit, me in Chicago—and we’d been accustomed to enjoying a good corned beef sandwich when we wanted one. I’m sure we were hardly the only ones to have the idea. And for a long while, it was just that. Meanwhile, I kept on in my mainstream management position. It certainly wasn’t a bad job, but it was becoming increasingly clear to me that I was giving my all in an organization of folks with more modest visions and values of food and management.

By the time the students came back to campus in the fall of 1981, I knew I was ready to leave the corporate food world. I really didn’t know what I was going to do, but I didn’t have any kids, I didn’t owe any money, and there really wasn’t any reason I could think of to stick with a job that felt less and less rewarding with each passing day. So, without a real plan in mind, two days before my 25th birthday, I gave a couple months’ notice to the restaurant’s general manager and started preparing myself for some unknown, but hopefully exciting future.

Then, in one of those interesting coincidences, Paul came by a couple of days after I’d announced that I was leaving. Opportunity, he believed, was beckoning; a smallish, two-story, red brick building around the corner from the fish market was coming open, and he thought maybe it was time to open the deli he and I had discussed for so long. The opportunity turned out to be a pretty good birthday gift for me. We started meeting regularly to review menus, business plans, pro-forma financials, and everything else we thought might be relevant.

On March 15, 1982, a ridiculously short four-and-a-half months after Paul called to tell me the building had become available, we opened. When we let the first customer in that first morning we had just two employees on the payroll—one part-time and one full-time. We also had a lot of loyal friends who were willing to make coffee and clear tables while they waited for us to put their sandwiches together. (Two of them—Frank Carollo and Maggie Bayless—have long since moved into more prominent roles as managing partners of the Bakehouse and ZingTrain, respectively!) We had five tile-topped square tables with four seats at each, and four stainless steel stools covered in not-very-cool-looking forest green vinyl anchored into the floor at a counter that ran across the big front window. 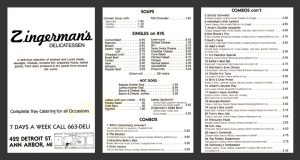 Back when we opened we offered a small but meaningful selection of made-to-order deli sandwiches (25 to be exact); a solid selection of much-loved Jewish specialties like chopped liver and chicken soup; a couple of refrigerated cases filled with cured meats, traditionally made cheeses, and smoked fish. Up at the register, we stacked loaves of bread and pastries from various local bakeries. The smoked salmon, salami, corned beef, and pastrami that got us going remain pretty prominent, though we’ve added a much wider and more interesting selection of traditional kinds of pasta, jams, kinds of honey, bottles of vinegar, and other great tasting stuff from around the world.

Like every new business, we made lots of mistakes and worked hard to correct them as quickly as we could. Fortunately, we were able to make things right more often than not. Lo and behold, we actually did pretty well. I’m sure my mother was more than a bit miffed, but next to deli classics like corned beef, herring, chopped liver, rye bread, and Swiss cheese we stocked cheap cigarettes and then-neighborhood favorites like ham hocks, pork rinds, and big bunches of collard greens. In those early years, we used to let people light up in the store, and each of the tables had a black plastic ashtray on it. I clearly remember our long-time customer, Larry, sputtering with anger that he was never coming back when we decided in the late ’80s to remove the ashtrays and limit the smoking to sausage and salmon.

But It’s So Small

While what we do probably sounds huge, it’s important to note that it all started in 1300 oddly shaped (I think it’s a “rhomboid”) square feet of space. Having heard about us through food-loving friends and all the positive press we’ve received, people in other cities almost inevitably imagine the Deli to be some massive Midwestern version of Harrod’s food halls. Boy, are they surprised the first time they visit. I can’t keep track of how many times I’ve heard something along the lines of, “Wow, it’s really a lot smaller than I thought!” Which is fine with us. We never wanted to be one of the biggest, only one of the best.

If you come to town, you’ll still find the Deli on its original site at the intersection of Detroit and Kingsley streets, across from the Farmer’s Market and about two blocks up from the old train station. The parking is still bad, the location still hard to find, but the neighborhood is now considered a great place to live. The two-story, orange brick, main building, with its mere thousand square feet of selling space, has been in the food business its whole life: it was built as a grocery in 1902. Although our European customers can’t quite conceive of something so new being considered of historical significance, the building is on the historic register.

In 1986, when the building was practically bursting at the seams, we added an additional 700 square feet onto the main building. This gave us space to make more sandwiches and to redo much of the building’s rapidly aging infrastructure. But, this still wasn’t enough room for us to do what we wanted to do. So in 1991 we renovated the 19th-century wood-frame house next door and added an additional 60 or so seats, along with space where we could make espresso, brew pots of specialty coffees and teas, and offer a much-expanded selection of sweets. This space is now known affectionately as Zingerman’s Next Door.

It’s all kind of whacked, but somehow it works. If you get into what we do, it’s a wonderfully weird and one-of-a-kind experience. As we said in our original vision, there are many delis but there’s still only one Zingerman’s. 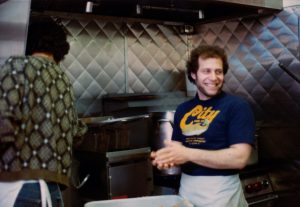 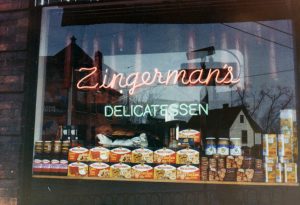 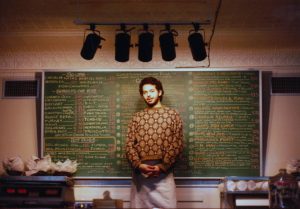 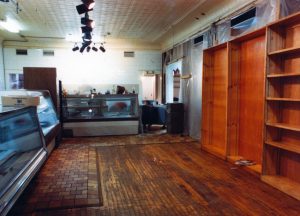 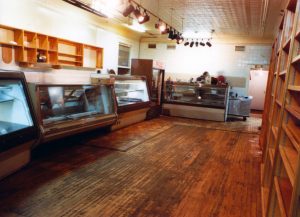 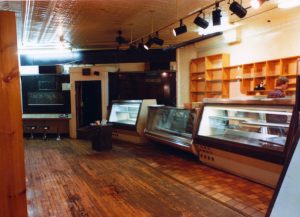