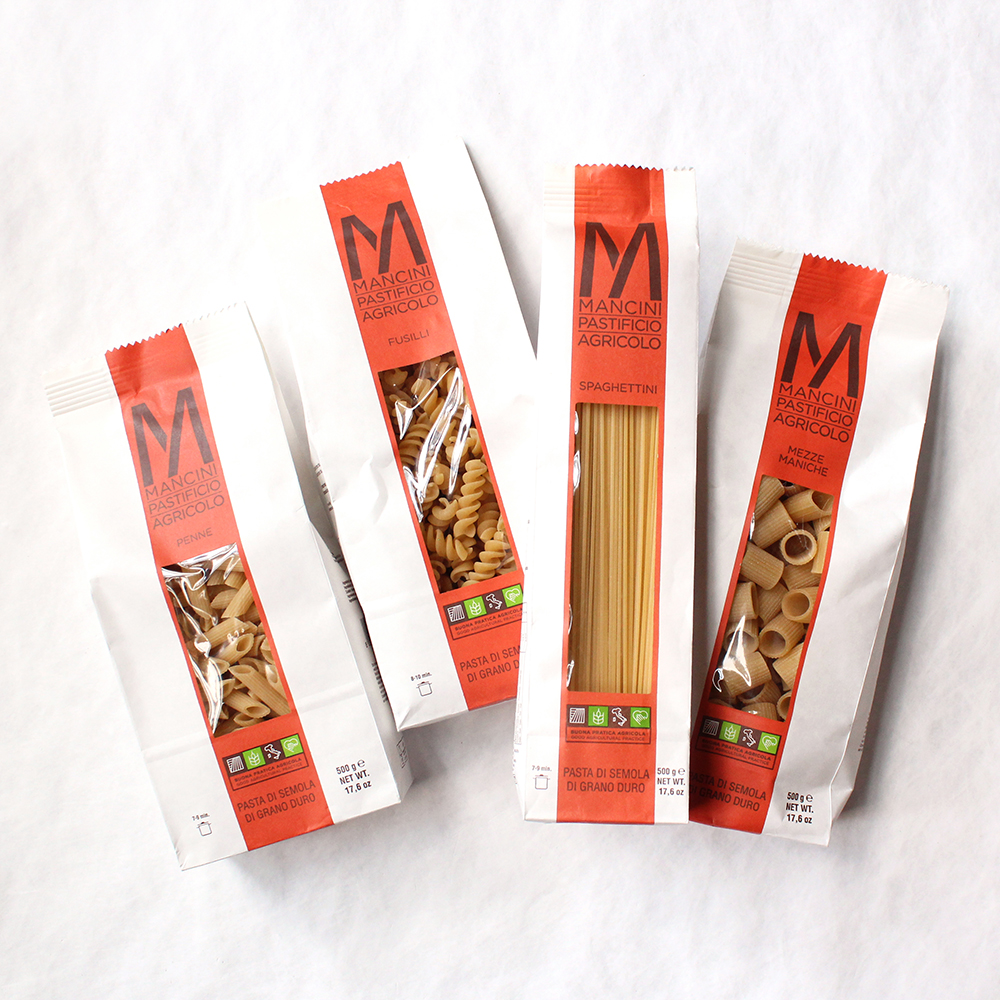 Artisan pasta has long been one of the greatest contributors to the quality of my culinary life. The names of the pastas are, for me, a bit like the act of rattling off famous actors, authors, or athletes would be for others. Rustichella, Martelli, Gentile, Faella … all have been adding to the quality of my eating for many years now. I love them all and turn to them regularly the way I reread the books of people like Peter Block, James Baldwin, and Brenda Ueland when I need a bit of intellectual comfort and creative inspiration. Three or four years ago, I added what, for me, was a new arrival to my list of world-class artisan pastas. In the spirit of great writers or teachers, it’s not like a new addition needs to bump anyone else off my list of favorites; I have no less love for the other pastas I mentioned above. And, at the same time, Pasta Mancini, from the Marche region on Italy’s east coast, has become a regular item at our house, and on our shelves at the Deli. If you like eating artisan pasta even an eighth as much as I do, I highly recommend giving it a try.

Mancini is unique among my list of favorites because it is essentially a farmstead pasta. In the same way that estate olive oils grow all their own olives or that farmstead cheeses use milk only from their own herds, the grain for the Mancini pasta comes from their own fields. In fact, if you go on the Mancini website, you can see an aerial map of the fields so you can picture pretty closely where the wheat that’s cooking in your pasta pot came from.

Maestà, Nazareno, and Nonno Mariano (developed with agronomist Oriana Porfiri and named for Massimo Mancini’s grandfather who founded the farm in the 1940s) are the grains that go into the pasta. They also grow the old Khorosan wheat, what they call Turancini (their name for the Latin, Turanicum), which they separately turn into terrific, darker, bolder, heirloom wheat pasta. The Mancini family has been farming for three generations, but about a dozen years ago they built a Pastificio (a pasta factory) right in the middle of the wheat fields! The design of the building was done, effectively I think, to be in harmony with the surrounding fields. Throughout, they have done an impressive job of using modern technology to support tradition. Claudio Marcantoni from Mancini shared with me that at the start of this year,

We began printing a QR code at the bottom of our packages, which works as the ID card of each single package. Scanning the code will allow the customer to immediately access certain and verifiable information about all the productions steps of each specific package of Pasta Mancini: the harvest year and date of the durum wheat used to produce that pasta; the milling date, in which the wheat was transformed into semolina; the moment in which our semolina was turned into pasta; the packaging day of the finished product.

All the same important traditional techniques that the other classic pasta producers I listed above also use—low temperature mixing; bronze die extrusion (properly made pasta should have a very rough surface); long slow drying (48 hours for the long cuts). They store the grain in cold storage at 18°C (which makes the use of preserving chemicals unnecessary) and blend the various wheat varietals each year to get the flavor they’re looking for in the finished pasta. With that in mind, each year’s pasta will be slightly different in flavor just as one would expect with an estate olive oil or wine, especially, Claudio told me, in the first few months after the new harvest. As with all the other great pastas, the aromas of the grain will fill your kitchen while you’re cooking and the perfume of the pasta will peak when you pour out the pasta water (be sure to use a bit of it to thicken your sauce first). The palate-catching quality particulars that make Mancini so good, must, I have to believe, be the quality and types of wheat they’re growing and then skills and styles of their milling and making procedures. The pasta really is fantastic; great chewy texture (be sure to cook very al dente) and full flavor. Remember, when you prepare it that, as with all artisan pasta, the pasta itself, not the sauce, is supposed to be the star of your supper.

One other indicator of pasta excellence is this trick I learned years ago—taste it a day or two after you cooked it, cold. Industrial pasta will have all the appeal of soggy commercial white bread. Great artisan pasta, on the other hand, will taste like a bit of well-made sourdough bread. Mancini passed the test with flying colors. The other evening, I made a simple pasta sauced with ricotta and black pepper—just thin the ricotta with a touch of the pasta cooking water and finish the dish with plenty of freshly grated Parmigiano Reggiano. We didn’t eat everything I made, so I stuck the leftovers in the fridge. It was late and I was being lazy, so I didn’t even cover the bowl. The next day while we were cooking, I decided I’d go back and taste-test. I wasn’t hugely hungry—really just curious. But the cold, already-cooked Mancini was so good, I ended up eating the leftovers, one piece of pasta after another, with my fingers out of the refrigerator. While that may not mean that much to most people, I will tell you it’s a remarkable and highly unusual thing for me to do! A sign, again, that this farmstead Mancini pasta is seriously fine stuff!

We have four shapes on hand to get going—mezze maniche, fusilli, penne, and spaghetti—as well as the turanici sedani. The Mezze Maniche (“short sleeves”), stubby, one-inch-long or so and nearly as wide, tubettes of pasta are a favorite at our house. All the Mancini offerings are marvelous. And don’t forget the Deli’s other artisan pastas. I learned years ago that a bowl of just-cooked artisan pasta, topped simply with great olive oil and Parmigiano Reggiano or Pecorino gives you a world class meal in under 15 minutes.

> PICK UP THIS PASTA AT THE DELI!