A great way to take advantage of the new season’s asparagus at your house! 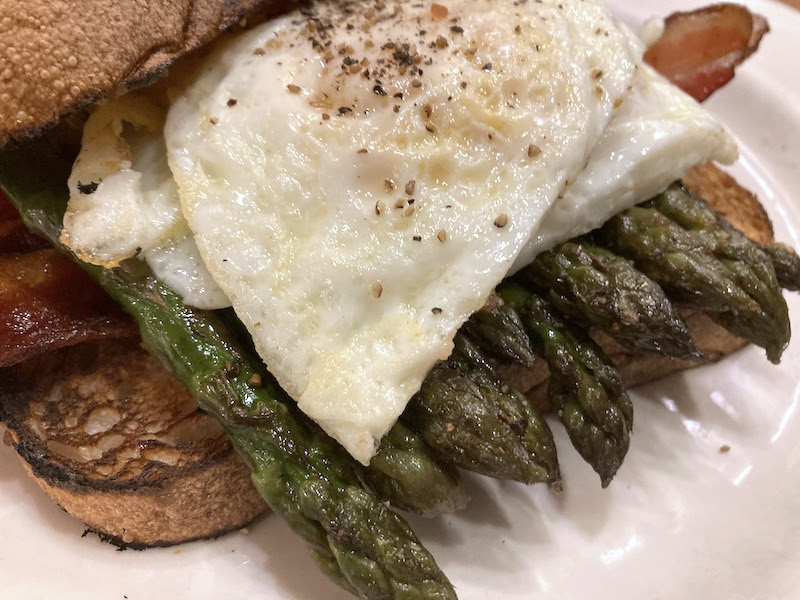 Going off the initials for asparagus, bacon, and egg, I decided to call this the Honest ABE sandwich. The name seemed appropriate—a bit of an antidote to the antipathy of modern times. A sign of spring, a bit of smoky salty pork, and the sunny-side-up egg to brighten your day. It’s some serious wholesomeness, natural diversity, and deliciousness all in one easy-to-make and marvelously tasty sandwich.

To make an Honest ABE sandwich, start by cooking bacon slices of your choice in a heavy skillet—if you like bigger flavor, go with Benton’s, or you can use the equally excellent applewood smoked bacon from the Nueske family. You can increase or decrease the number of slices you use depending on how much bacon you like to eat. I’ve been going with two slices per sandwich, but even a single slice would work if you’re eating less meat, and enthusiastic bacon eaters would probably take it up to four.

When the bacon starts to heat up in the skillet, add a bunch of fresh asparagus spears to the pan—if they’re long ones, cut them in half before they go in the pan. Again, the ratio is really up to you—there’s no right amount. I load up the asparagus myself—it’s so good this time of year!

Cook the asparagus until it starts to brown a bit on the edges. If the bacon is starting to get too well done, just take it out of the pan early while the asparagus finishes up in the hot bacon fat. When both are out of the pan, crack an egg (or two) into the skillet to cook in the bacon fat. I’ve been cooking “over easy,” but you can do it any way you like of course. Meanwhile, toast two slices of bread. I’ve been using Bakehouse White (our delicious Pullman loaf), but you can also do it on Farm Bread, Sourdough, or whatever you like. Spread the toast with plenty of the mayo.

When the egg is ready, put it with the yolk facing down, onto the bottom slice of bread (if I were in a restaurant doing this, I’d probably put it on top for the sake of presentation, but since I’m at home, I don’t care that much how it looks and I like it when the yolk soaks into the bread rather than running off). Lay the asparagus on top of the egg, then top with the bacon slices. Grind on a bunch of the 5 Star Black Pepper Blend, slap on the other slice of the bread, and eat it while it’s still hot. It’s messy, but it’s fantastic!