Not all types of bacon are the same. There are different cuts of pork, preparations and processes that create a whole spectrum of bacons. Here’s a handy guide, from the common to the all-but-lost, excerpted from Zingerman’s Guide to Better Bacon by Ari Weinzweig. 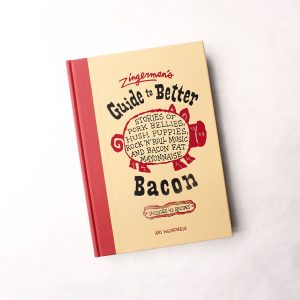 Bacon: Over here in the U.S., cured and usually—though not always—smoked pork belly.

British Bacon: Today, this generally refers to the back and not the belly, cured in a brine solution but not smoked.

Canadian Peameal Bacon: Pork loin cured in a wet brine solution and then rolled in cornmeal. The real thing is sold raw and never smoked.

Dry Cure (a.k.a. Country Cure): Raw pork rubbed and then set into a dry solution of salt, sugar and spices (instead of a brine) to cure the pork before it’s smoked.

Fatback: The strip of fat from the top of the hog’s back, above the loin. Used extensively in old-style American cooking, it really has no meat on it whatsoever. In the South you’ll still see places selling fried fatback. Typically used to make lard and cracklins.

Pancetta: Dry-cured but unsmoked Italian-style bacon made from pork belly.

Streak o’ Lean: Like fatback, but with—at most—a small strip of meat in it. Sometimes smoked, sometimes not. Also like fatback, streak o’ lean can be floured and deep-fried to make a crisp little bacony snack.

Streaky Bacon: What British people ask for when they want American-style belly bacon.

Wet Cure: Bacon that spends a good bit of time in a saltwater brine, most often—though not always—with sugar and spices.
Wide: The wide side of the pork loin as it’s used for bacon—it’s from further up the top loin toward the shoulder.

The better old-style bacons are often dry-cured—rubbed with dry salt and sometimes sugar and/or nitrite and nitrate. Alternatively they can be wet-cured—soaked in a brine solution of water and much the same stuff that goes into the dry cure. Dry-cured bacons lose up to 15, 20 or even 30 percent of their weight in the curing. By contrast, commercial wet-cures can actually gain weight while they’re “working out.” The curing can be done anywhere from a day to a couple of weeks.

Unlike with bone-in country hams which are thicker and need more time for the salt to penetrate, the curing for bacon stops fairly soon after the bellies go into the cure. Some producers today use sea salt, others rely on commercial ground salt—there are actually dozens of different salts one can use and each producer will, of course, swear on his own. And there are just as many choices for sugar. Most folks work with white, but some use brown.

Wet cures aren’t a totally modern invention—there are many recipes from the 19th century and even earlier that call for brining the raw belly to cure it before smoking. As with country ham, you had to have an environment in which the bacon would cure—weather that was either too wet or too cold (freezing) could be a problem.

In the old days, smoke was important not just to enhance the flavor of the bacon, but also because it helped to reduce the risk of spoilage. These days all the bacon makers will tell you that the smoke is about flavor, color and tradition. Although there are a few exceptions, most American bacon is smoked anywhere from a few hours to a few days. Some, though, aren’t smoked at all, just cured. Worse, many commercial bacons use artificial liquid smoke.

Different producers use different woods, and each wood will of course bring its own flavor to the bacon. People generally used the wood that was readily available to them in the area. Hickory was used mainly in the East and the South, applewood or cherrywood in the North, and maplewood in the Northeast and upper Midwest—though it was not limited to these varieties of wood in each area. Corncobs were often used in New England. We’ve even heard about throwing juniper berries, coriander, and other spices in with the wood to alter the smoked flavor of the finished bacon. 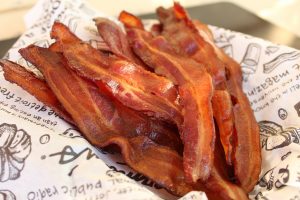 Serve Up a Bacon Board at Your House!

Here’s a way to make bacon eating as educational as it is enjoyable! The way we see it, if everything is better with bacon, we could make everything four or five times better by serving four or five different bacon varieties every time we entertain. If you’re having company for brunch why not buy a range of bacon and let your guests experience their respective flavors—tasting one bacon next to another is incredibly interesting and delicious. Even for lunch, why not cook up a couple different types of bacon—let your kids sample and compare. It’s a great way to practice adjectives (“What do you think each bacon tastes like?”), geography (“Where does this bacon come from?”), etc. It works for cheese, right?

We’re all used to serving four or five cheeses on a cheese board so that our guests can taste, compare and enjoy the diversity of flavors and textures. Why not take the same tack for bacon?

Before you get started on that bacon board, perhaps you need some bacon assistance. Luckily, you’ve come to the bacon experts at Zingerman’s Deli. Read on for more! We can hook you up with tasty tips on How To Cook Bacon, a buyer’s guide to the Best in Bacon makers and bacon recipes.