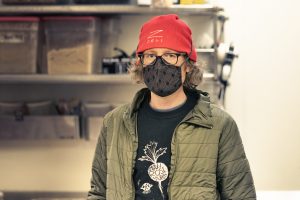 Rodger says there was something about his first summer making sandwiches at the Deli that rattled him right out of his introverted tendencies and beliefs about food.

“We all come to this organization with our preconceived notions of food. Twenty-five years ago I didn’t like coleslaw – I grew up with slimy, sweet coleslaw. Then you try it here and it’s amazing. This happens to me constantly, think I won’t like it and then think holy… that’s good. For example, who wants tinned mackerel – in my mind it’s cat food. But then you try it and your mind is blown,” Rodger said.

After that first summer, the Deli kitchen became Rodger’s home base as he followed his curiosity into kitchens across the country and overseas. Little did he know, he’d go on to become a managing partner of the Deli, fulfilling a dream he’d had when he first started on his culinary path.

“I wanted a sandwich shop when I was in culinary school. Sandwiches are good! Now I’m here. Now I own one. A unique one,” Rodger said.

Rodger’s Path to the Deli

Rodger was born in Pennsylvania. He grew up on the westside of Michigan, in a two-stop sign town near Battle Creek, where his nearest neighbor was over a mile away. His family loved gathering around food, making Pennsylvania Dutch classics like flank steak and pizza casserole, birthday cakes and 14 kinds of Christmas cookies, all from scratch. Rodger made the choice to be a chef in middle school. Instead of following in his uncle and grandfather’s footsteps as a pilot, he pursued his love of food. He cooked with his aunt, school lunch ladies, in home economics classes, and later at culinary school where he specialized in pastry.

“I chose Grand Rapids Community College because it was close to home and I could afford it. I moved out at seventeen,, signed an illegal lease and grew up really quick. I worked third shift at Burger King and would wash my class’s dishes as a job,” Rodger said.

He found himself in Ann Arbor after taking a summer job cooking at Camp Michigania, where he met a girl who went to the University of Michigan. 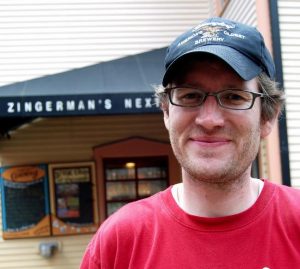 When Rodger arrived in Ann Arbor in 1995, he took three jobs. First, at Gandy Dancer as a full-time assistant making desserts, chocolates, and wedding cakes, where he later became a full-fledged pastry chef. He also picked up jobs at Seva making vegetarian sushi on Wednesdays and at Zingerman’s making sandwiches part-time.

Eventually, his hunger for new learning experiences caught up with him. He quit all three jobs and boarded a plane to London to work for six months.

“I worked a lot of different jobs. I really wanted to put myself in many different learning situations… I always knew I was going back to Ann Arbor and Zingerman’s,” Rodger said.

In London, he worked in a kitchen with the full British “Culinary Brigade” system of hierarchy cooking for the Tory Party wing of government. He said this was the first time he cooked with people who didn’t just see cooking as a job, and learned from passionate culinary professionals including a 70-year-old stock and sauce expert.

Rodger’s travels eventually took him to Ireland’s Ballymaloe Cookery School, where he spent a semester learning the fundamentals of organic food production and cooking with fresh, daily produce from the organic farm. He later spent time as a private chef on houseboats in France, cooking Americans breakfast and dinner after collecting ingredients from open-air markets on his bike.

When he eventually made his way back to Zingerman’s Delicatessen full time, he became the first assistant manager ever. While he wasn’t jetting off to Europe anymore, Rodger found ways to add new, educational cooking experiences to his life. During his vacation time, and instead of attending food industry trade shows, Rodger staged at restaurants like Chez Panisse in San Francisco and Le Bernardin by Eric Ripert in New York City. 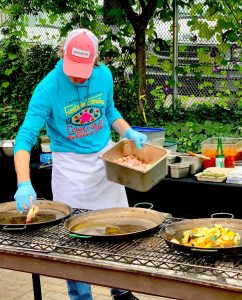 Rodger’s passion for learning naturally translates into a passion for teaching. Rodger teaches the Zingerman’s class “Introduction to Good Food” where students learn how to taste things like it’s their first time, an introductory knife skills class, and says he feels like he’s, “Making the world a better place by teaching people how to cook.” His teaching experience also includes teaching culinary and agriculture lessons to elementary and middle school students, BAKE! classes on pot pies and Hungarian food demonstrations with Amy from the Bakehouse.

Rodger at Work & at Home

While Rodger describes himself as a behind-the-scenes kind of guy, many Deli guests have already experienced the improvements he’s made at the Deli.

Adding Brinery sauerkraut to the iconic reuben? That was Rodger. The creation of Zingerman’s potato chips? Yep, all Rodger! What about the Deli’s ranch dressing, hot cocoa, mustard, granola, pickles and knish? All improved by Rodger. You also may know Rodger from the Deli’s celebrated Paella Parties – he’s at the helm of the annual Spanish food fest.

Rodger is also responsible for several process improvements at the Deli that have made an impact both on the local food economy and the Deli’s efficiency. He introduced local, small-farm produce into the Deli’s daily operations and streamlined the Deli’s complex, international buying operation of over 5,000 products.

When he’s not at the Deli, you can find Rodger hanging out with his “really awesome” family or spending time outdoors. Rodger is a bike lover and says he’ll ride anywhere – including Ann Arbor’s mountain biking trails – he just needs the right bike (and he currently has six). He enjoys hiking, fishing and hunting, which he says he does more so for the peace of mind than the actual hunt. 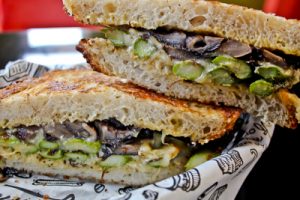 Explore the world of terroir and taste with Rodger and other Deli experts by signing up for one of the Deli’s virtual or in person events. Browse the calendar and sign up here.