Paella (py•ay•a) is arguably Spain’s most well-known dish. It’s a satisfying one-pan meal of densely flavored rice, but what else gets added in beyond that is up for debate. Like many foods worthy of being passed down through generations, the history can get skewed over time.

Luckily, we have a wealth of information from Ari Weinzweig, Zingerman’s co-founder and history major. What follows is Ari’s take on paella – enjoy! 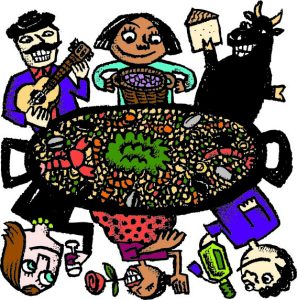 My particular interest in paella began when I first began to read about it years ago. The more I read, the more I realized just how far the average American version of the dish had strayed from the intent and integrity of the Spanish original. The dish starts out as something special and it often ends up as far from the original as Taco Bell is to authentic Mexican.

Granted, most Paella Americana had kept enough of the Spanish look to be able to get away with using the name “paella.” In the course of its transatlantic crossing, the true greatness of the dish had been lost. Submerged in a shallow sea of shortcuts, paella over here was so often altered to fit American tastes and available ingredients, that it would probably have been unrecognizable to a Spaniard.

The thing about paella is that, although it’s inevitable one of the most recognized elements of traditional Spanish cooking, hardly anyone over here has ever had a good one. The good news is, the Deli serves up the authentic dish at its Paella Parties every fall – but more on that later!

Unlike pseudo-authentic Italian dishes like spaghetti and meatballs, paella really is an incredibly popular dish in its home territory. Whether they’re eating it at home or at their favorite restaurants, most Valencianos seem to really love it. Of course exactly what goes into the dish they love isn’t quite so simple to ascertain. In its homeland, there is no handbook on paella preparation. Unlike classical French cuisine there is no “right” way, no culinary dictates that determine what may or may not be in a paella.

Instead, paella long ago arrived at that level of local legend and lore where everyone agrees on how important it is, but never on exactly how it should be made or what ingredients ought to be in it. Word has it that every Valencian has three recipes for paella in their head –one from their spouse, one from their grandmother, and one of their own –and pretty much every native I’ve ever asked has had at least that many. The modern addition to this axiom is that most Valencianos also have their favorite place to call for carryout paella. Here we call for pizza. In Valencia they pick up the phone and order out paella. It’s delivered right in the pan (with deposit of course), ready to devour as soon as you drive home.

Paella has been a part of cooking in Valencia for centuries. Most folks seem to agree that the development of the original paellas was pretty much a practical affair, developed along the shores of La Albufera, the freshwater lagoon that comes in from the coast. Paella’s roots are strictly working class. Working folk – fishermen, shepherds, etc. – cooking readily available ingredients over an open fire. Because it was developed long before Columbus brought the produce of the Americas back to Iberia, paella almost always relies on ingredients of European, African or Asian origins.

Best I can figure from reading and talking to Valencianos the old time ancient and “authentic” paella of history was likely made with saffron-scented rice, topped with snails, eels and green beans. Paella additions can be specific to the region or season, and have evolved to the point nearly anything goes and everyone has their own version. Paella plays a big part in the social scheme of Valencia. Today, paella cooking is generally reserved for Sundays or holidays. It’s considered too time consuming for a busy family during the week. Cooking paella is sort of like barbecuing in the States–it’s the one dish that men in Valencia may well specialize in.

To this day paella remains popular as an outdoor dish. There are many Spaniards who swear it tastes better cooked over a wood fire, and many Valencian restaurants still cook paellas outdoors. Its affinity for open air cooking makes paella an advantage to American cooks, since most of our stoves are a bit too small to really effectively accommodate a paella pan of any size. 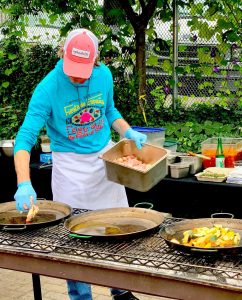 The paella recipe that we’ve cooked over the years at Zingerman’s features both seafood and meat (take note, though, that there are Valencians who will argue that the two should not be mixed). We use chicken, shrimp, Spanish chorizo sausage, mussels, clams, roasted peppers, parsley and green peas. But you can easily prepare a vegetarian paella, say with asparagus, fresh fava beans, roasted red and yellow peppers or any number of other vegetables. Or you can make a country-style Valencia paella with rabbit, snails, chicken and green beans. You get the idea–you make the call. There are literally hundreds of ways to play out your paella fantasies.

Every year, Zingerman’s Delicatessen hosts a Paella Party and offers three flavorful versions: shrimp and mussels, chicken and chorizo, and vegetarian. The vegetables selected are whatever is in season at the Ann Arbor Farmers Market, but often includes green beans, carrots, yellow squash and lots of fresh herbs. Hungry yet? Us too.