Let’s kibitz about knish. Have you tried these precious parcels of potato-filled pastry?! Not to toot our own ram’s horn, but we think our take on this Jewish specialty is truly something to write home about. 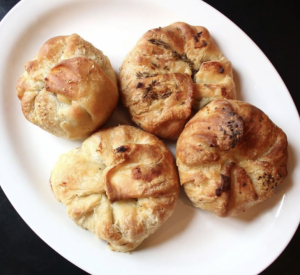 A knish is a classic Jewish pastry stuffed with splendid fillings and wrapped in outrageously good dough. They are Eastern European in origin and were popularized around the turn of the last century in America’s urban centers by Ashkenazic Jewish immigrants. Knish carts were once a common sight along streets in neighborhoods of high Jewish concentration (Manhattan’s lower east side is perhaps the most storied of these quarters), providing a cheap and filling treat for their working-class denizens, both young and old. Over time, brick-and-mortar knisheries appeared in these communities as well, offering knishes with three main varieties of fillings—potato, meat, or kasha—either baked or fried.

As neighborhood demographics changed, these carts and knisheries lost their appeal and have gone into decline. Fortunately, the knish and other traditional Jewish foods have made a resurgence in recent years, returning to the urban centers where they were once so popular. Here at the Deli, we’ve been serving up our classic potato knish since we first opened our doors in 1982.

Once upon a time, the most beautiful queen in all the land, Anita Knish, was making handmade savory Jewish pastries. One day, she was visited by a dapper dancing sandwich man. “Who are you and why are you interrupting my baking?!” the Knish Queen of Ann Arbor exclaimed. “I am Bread Astaire and I think your Zingerman’s Knishes do it right, do it big and do it with style!” Then they fell madly in love. And that’s what happened, true story.

Okay… maybe not, but that’s our story, and we’re sticking to it!

We’ve got four phenomenal filling choices for our knish, each of which is wrapped in our flaky handmade dough that’s made with Zingerman’s Creamery farm cheese, local sour cream, butter, and flour with (shhhhhh, it’s our not-so-secret ingredient) …a bit of yellow mustard. It’s true, the mustard is a slightly unconventional addition, but it replaces the traditional vinegar and adds a subtle, welcome zip to the dough—we’re pretty positive your Bubbe would approve!

The original starch on starch and the most traditional of our knish. It’s filled with kasha (aka roasted buckwheat) and onions, finished with a light dusting of caraway seeds.

Our best selling variety of these Jewish pastries features the comforting combo of herbed mashed Yukon Gold potatoes and onions.

This one isn’t traditional, but it’s a staff favorite, and dare we say it… our best knish yet! It features Zingerman’s pastrami and red-skinned potatoes, finished with a sprinkle of cracked coriander seeds. 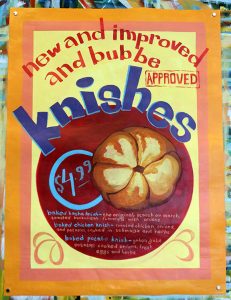 There’s no wrong way to eat a knish, but we like ours served hot, with a side of good mustard. Enjoy one as an appetizer, midday snack, or served alongside a soup or sandwich. Stashing knish in your freezer means you’ll always have some on hand when the mood strikes for serious comfort food.

(No need to memorize this, we also put it on the label)

Find a Knish to Nosh

See more of our Jewish fare with a Zingerman’s flair, such as latkes, chopped liver, and noodle kugel.