A fresh baked loaf of bread is just one pillar of a great meal you’ll find gracing the shelves of Zingerman’s Delicatessen. While shopping for specialty foods such as aged cheeses, estate olive oils and varietal honeys, you can spot warm loaves arriving at the Deli several times a day from our friends and partners across town at Zingerman’s Bakehouse. They’re known around the country for their variety of artisan breads, among many other specialties. From crusty to soft, sour to sweet, there’s something for everyone. One lovely loaf that’s been added to the roster, the State Street Wheat, has a special story to tell. 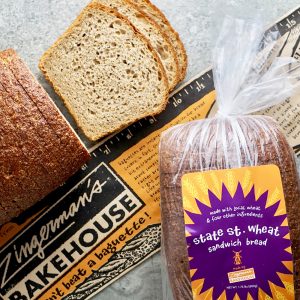 From Zingerman’s Bakehouse: The Story Of State Street

We’ve developed a new bread here at the Bakehouse, State St. Wheat—soft, sliced, and packaged in plastic. It’s very different from the breads we usually make, so we wanted to explain why we’re doing it, and why we’re excited about it!

Here in the United States, a bread revolution unfolded in small pockets of the country, beginning as early as the late 70s and then more extensively in the 80s and early 90s. People began to relearn the art of baking naturally leavened (sourdough), hearth-baked breads—often round and crusty, very different from grocery store bread.

Today, a loose collaborative of bakers is trying to start another revolution. We are calling ourselves The Bread Lab Collective. We’re a national group of craft bakers, millers, teachers, students, and wheat breeders inspired by the work of The Bread Lab of Washington State University to work together to make nourishing sandwich bread available nationwide. Together, we’ve set out to create pure and simple whole grain sandwich breads that have broad appeal—familiar flavor, familiar texture, familiar shape—but are healthier than mass-produced, grocery-store bread because of our ingredient choices and artisan baking techniques.

Our goal is to bring nourishing bread to more people in our communities and to inspire other artisan bakers to join us so that Bread Lab Collective sandwich bread is available in every state. We’re excited to be teaming up with more than a dozen other bakeries from across the country, including King Arthur Flour Bakery (Vermont), Barrio Bread (Arizona), Seven Stars Bakery (Rhode Island), Breadfarm (Washington State), Prager Brothers (California), and Elmore Mountain Bread (Vermont), as founding members.

Each bakery in the Collective has made something a little different, in keeping with local tastes and ingredients and with their bakery’s flavor and process preferences. The Collective wants some degree of consistency, so we’ve agreed upon a set of specific criteria to bake by; here they are:

How is our loaf different from typical grocery store bread? Most grocery-store bread is made with a considerable amount of commercial yeast, which allows it to be made quickly and cheaply. Furthermore, typically added fats, sugars, preservatives, and other dough conditioners give grocery-store bread its workability to achieve a lofty look as well as its desired texture and flavor. By keeping our bread naturally leavened (sourdough) and using the right artisan baking techniques, we don’t need to rely on heavy quantities of commercial yeast or multiple additives to create an appealing and nutritious loaf. 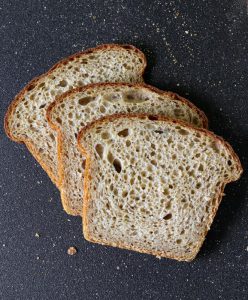 The Bread Lab Collective is passionate about supporting the work of the Bread Lab at Washington State. To this end, we’ve also all agreed that ten cents from each purchase of State St. Wheat will go to the Bread Lab to fund further research designed to make projects like this possible.

We’re done with our experimenting at the Bakehouse and are ready to introduce State St. Wheat. We’re using just five ingredients in all, including local wheat and rye, along with Michigan honey, olive oil, and sea salt—that’s it! And, of course, we’re also adding in some extra attention to detail.

Hazim Tugun, who works on recipe development and grain milling at the Bakehouse, describes our process, clearly showing the care we take: “Our team freshly mills Michigan-grown, organic soft white wheat and combines it with stone-ground, high-extraction, Michigan-grown hard red spring wheat flour we get from our miller in Traverse City.  We take the extra step to lightly cook (scald) a portion of that freshly milled soft white flour for added sweetness and moisture. All of that goes into a naturally leavened dough with a touch of Michigan honey and olive oil for a same-day fermentation to keep the flavors mild. The loaves get a gentle bake in our convection ovens to achieve a thin, relatively light-colored crust. The result is a flavorful sandwich loaf where you can taste the grain, with the added bonus of a tender and moist crumb, and a relatively long shelf-life.”

Click Here to Shop State Street Wheat at the Deli!