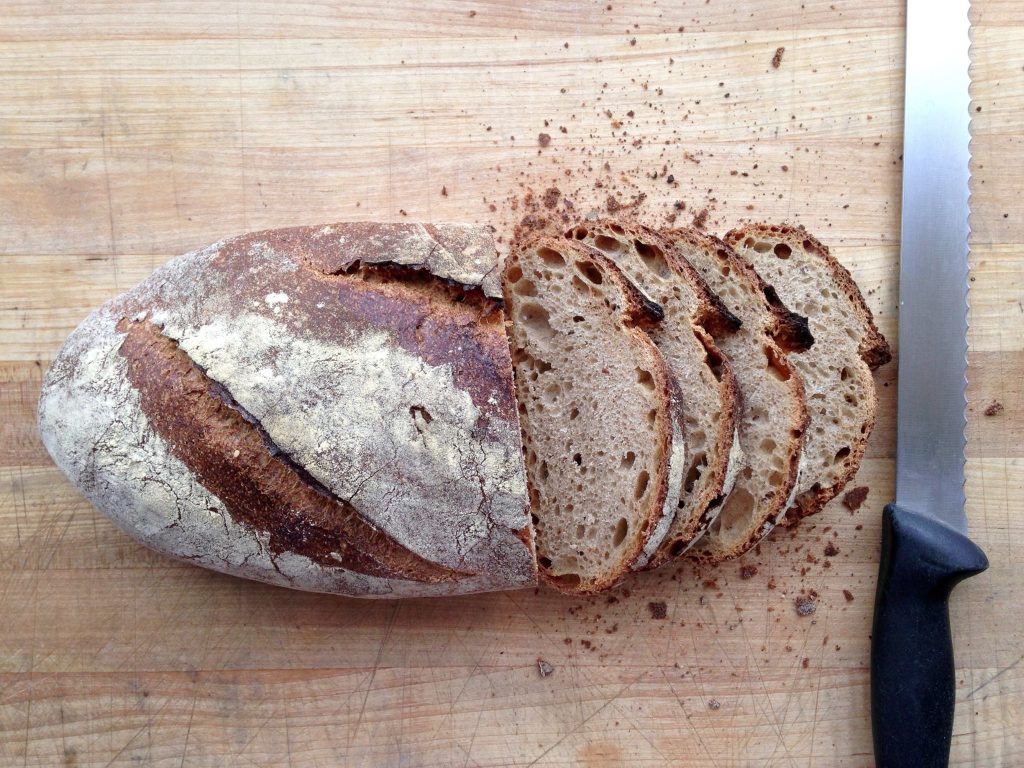 The commitment everyone at the Bakehouse has made to this bread is a great example of artful thinking at work. The bread itself is terrific, and by baking it, the Bakehouse is quietly helping to encourage Michigan grain growers to go back to old varieties, explore organic farming, and restore a healthier, less erratic way of working together that energizes instead of exhausts. Over the course of the seven years that we’ve been making it now, True North has become one of my favorite breads. I’m not alone—its popularity has grown so much that we’ve just this month begun baking it seven days a week!

Wheat is not native to the region. It came to the Americas with Europeans. As Native Americans were pushed off their lands, colonists came west and began to plant crops they were comfortable with—wheat being one of the most common. Around the time that the house and barn at Cornman Farms were being built in the 1830s, wheat was spreading across the area’s farmland. By the time the Deli’s building was being completed in 1902—this month marks its 120th anniversary—Michigan was the leading wheat-producing state in the U.S. (For context, there were 45 states in the country at that time.) Over time, wheat production fell off and fruit-growing grew. In many ways, the True North is an effort to go back to what artisan bread might have tasted like had it been baked in a local farmhouse kitchen at the turn of the last century, made from what we now know as heirloom wheat that was freshly milled onsite.

The True North is made from wheat we get from Grand Traverse Culinary Flours in Traverse City. The stone-ground milling process they use leaves 80 percent of the wheat kernel—the bran, endosperm, and germ in the flour for great flavor, texture, and nutrition. Frank Carollo, now retired managing partner at the Bakehouse, says, “It’s the most wheaty tasting bread that we bake. This naturally-leavened loaf is pure Midwest. We make it with high-extraction wheat flour made from hard red spring wheat from Janie’s Mill in Ashkum, Illinois.”

True North bread is terrific for toast. It’s great, too, for grilled cheese. I’ve also been using it to make one of the best club sandwiches I can remember: smoked chicken on toasted True North, spread with a good bit of mayo, then add some lettuce and tomato. It’s great, too, with some of that cherrywood-smoked bacon we have right now from Nueske, and a bit of avocado. Remember to add sea salt and fresh pepper to the whole thing! Super good.

Co-managing partner Amy Emberling says, “True North is now my go-to bread! Mild amount of sour, great moisture in the crumb, elevated flavor from the 80 percent extraction flour.” The loaves with the darker crusts are, without question, my favorites—the Maillard effect caramelizes the natural sugars in the grain and makes for the most balanced, complex, and compelling flavors. Now that we’ve got it on hand every day, it’s easier than ever to access. If you haven’t yet tried the True North, now could well be the time to swing by and get a sample!