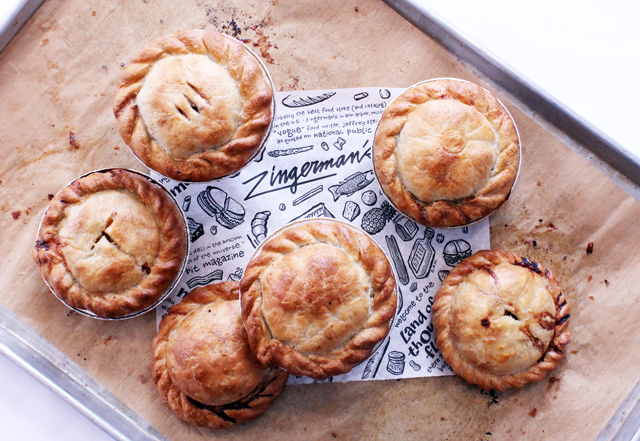 New Year’s Day is the official kick-off the Deli’s Stock Up Sale, which offers you a bulk discount on our pies and runs through the ned of February. Our production team launched into pot pie assembly this year way back in November, to stockpile hundreds of pies to get ready for this once a year sale. The team will continue to make two to three batches a day through February.  Last year, we sold over 9,000 pies (which equals over 300 batches and 18,000 portions of dough!). That’s a lot of pies, but it isn’t too surprising—savory pastry has provided comforting meals for centuries.

Rodger Bowser, Deli Chef and Managing Partner, got a Michigan Department of Agriculture wild mushroom certification so he could expertly and safely identify, forage, buy and sell wild mushrooms. For years, Rodger worked with local foragers to find the best hen of the woods mushrooms (maitake in Japan) for these beloved pot pies. Recently, he discovered a more available and reliable supply from Mycopia Mushrooms, in Scottsville MI, who have been growing fresh mushrooms since 1977, when they were the first to commercially cultivate shiitake in the US. These growers use an oak-based substrate in reusable bottles. Their mushrooms have been certified organic and kosher since 2005. We us upwards of 100 pounds of mushrooms to make these pies year round Deli. Their rich flavor and meaty texture can be found in the Fungi Pot Pie of course.