A taste of Christmas tradition to celebrate Epiphany 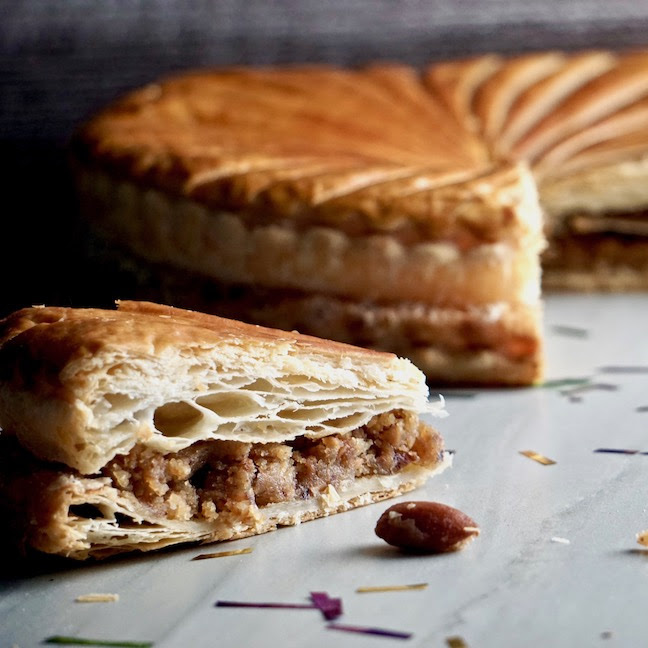 A special seasonal appearance of one of the more quietly compelling offerings from the Bakehouse. King Cake will be on feature this coming week, from January 4 to 6, to mark the arrival of Epiphany on January 6. For those of you who, like me, might not be familiar with it, Epiphany is also known as Three Kings Day, or the Twelfth Night of Christmas—a holiday that in Christian tradition marks the visit of the Magi to the infant Jesus. It’s also celebrated by some still as “Little Christmas.”

King Cake is a rather luxurious rendition of puff pastry stuffed with almond frangipane that we make here at the Bakehouse. In New Orleans, King Cake is most prominently tied to Mardi Gras in February, but historically it’s been eaten during the period from Epiphany through to Mardi Gras. The cake is traditionally decorated with curved spiral lines on top and scalloping on the edge, made to resemble a king’s crown, hence the name. Typically, each cake has a fève baked into it, the real or the metaphorical equivalent of a “fava bean,” for good luck. In New Orleans that’s usually now a small porcelain baby, but for fairly obvious public health reasons most bakeries now either use something more edible, or put the baby on the outside of the cake. At the Bakehouse we use a whole almond. Whatever the prize, if you get the lucky slice, you’re the “winner.” Amy Emberling, managing partner of the Bakehouse, shares that the “cake is also known as le Pithiviers. This particular style of cake derives its French name from the town Pithiviers, in the Centre-Val de Loire region of north-central France, where it is thought to have originated.” You don’t, of course, have to celebrate Little Christmas to savor a slice of the cake; it tastes terrific even without all of the religious tradition.

While it doesn’t get anywhere near the attention in American culture that is doled out on December 25, Epiphany has an equally long history. The old English folk song “The Cherry-Tree Carol” is a musical celebration of Little Christmas and Epiphany. The song is said to date all the way back to the 15th century. It was famously recorded in 1961 by Joan Baez, but I knew it first though from one of my favorite albums of all time, Shirley Collins’ and Davy Graham’s 1964 release Folks Roots, New Routes. If you want something more modern, Mark Lanegan from Screaming Trees did an electric version a few years back too. And while you’re listening, savor a piece of this special Bakehouse offering. Great with a cup of the Roadhouse Joe from the Coffee Company!

> KING CAKE IS A SEASONAL ITEM. CHECK OUR SPECIAL BAKES FOR AVAILABILITY!