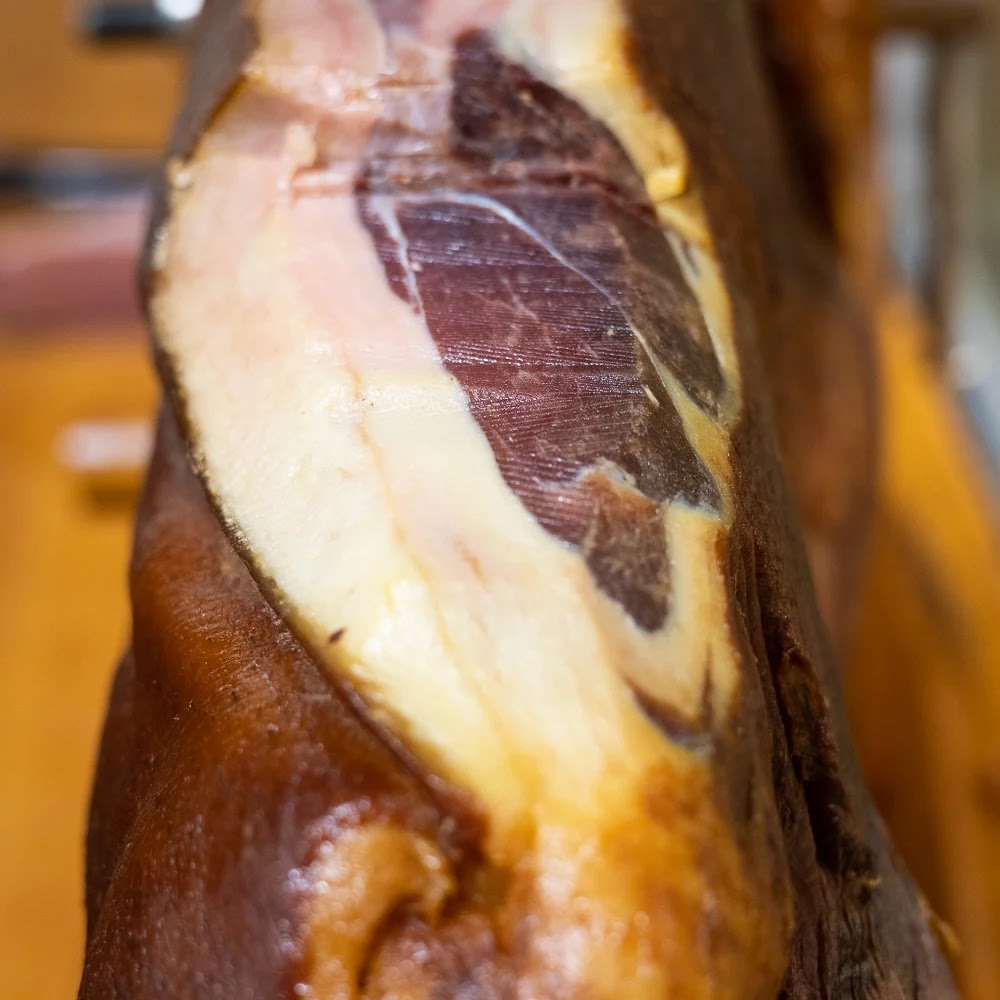 Country ham is a real-life example of a story that’s changed significantly in recent years. Had it not, what I’m writing here would never have happened. Back around the time that we opened the Deli in 1982, in its home territory of the Middle South—the Carolinas, Tennessee, Kentucky, Missouri, northern Georgia, etc.—county ham was an everyday food. Outside the region, it was rarely talked about. If one was to have read up on country ham, as I did back then, you’d have learned that country ham was generally to be cut into thin slices and then pan-fried. Often it would have been served with Red Eye Gravy made with coffee and the pan drippings. Eaten this way it is, to my taste, pretty salty and not something I’d have sought out.

That all changed when I took a road trip to Kentucky with my friend Randolph Hodgson, co-founder of Neal’s Yard Dairy in London. In an essay I wrote about our travels the next year, entitled, appropriately for this enews, “Uncovering the True Story of Country Ham,” I shared,

The interesting thing about country ham though is that while most everyone in the South heats it before they eat it, you don’t have to. Because like all its famous European counterparts, long-cured, traditional country ham can be eaten as is, “raw” and uncooked, cut into thin slices like you would Italian prosciutto.

The story that my friend from North Carolina, Lex Alexander shared helped shift my beliefs.

When I was a kid my grandfather always had a country ham hanging in the basement. And we didn’t used to cook it. We used to go down there and cut little slivers off just as it was.

If you’d like the entire essay, email me and I’ll send it. After that trip, we started to recommend eating country ham the way you would prosciutto. Around the same time, a handful of others did the same. Over the years, the story of country ham in our end of the food world is now that this is the way to eat it. Cut into thin slices and savored just as it comes off the ham. This extremely excellent nearly three-year-old (yes, it was started before the pandemic) country ham that appeared on the Deli’s counter last week is here only because of that different story!

Broadbent and the recipe for the ham curing date back to 1909. Ronny and Beth Drennan bought the recipe from Smith Broadbent III back in 1999. This new ham is something particularly special, part of a very small batch of hams the Drennans have been crafting with pork from heritage breeds of hogs. Connor Valone at the Deli did the work to get us a bit of this excellent, limited-edition ham. Here are a few of his notes:

After heartbreakingly discussing the “drying up” of heritage family farms during the height of the pandemic, Ronny offered to give me a ring when he thought his remaining crop of heirloom hams—Berkshires from a family farm in Missouri, would be ready for sale. Lucky us: Ronny opened the vault as the season turned this past month, and I bought up two hams for our Deli counter.

True to form, these heritage hams are exactly what we wanted to taste: smooth, melt-in-your-mouth fat, marbled with dark, tender meat. They also have Broadbent’s signature balance in its cure—not too salty, not too sweet, and not too smoky of a country ham, really just the platonic ideal of a country ham profile, but with the signature depth of flavor that Berkshire pork holds. It really tastes like how country ham was intended to taste; a mark of perfect preservation without any element of preservation overshadowing the other, as each compliments the next with grace.

The two hams Connor snagged for us are a bit of a culinary paradox at its most flavorful. Delicately salty and subtly sweet at the same time; it’s both gentle and intense; a taste of centuries of pork curing tradition put forward in the most positive of 21st-century ways. There are only a handful of American hams of this quality! Be sure to let the sliced ham come to room temperature and then eat it. It’s wonderful with Rancho Meladuco dates and the ripe fresh local pears that are at the market right now. Be sure to appreciate the aroma before you eat—it’s like sticking my nose into a bouquet of beautiful flowers. Exceptional, enticing, good enough to start shifting the energy on a difficult day from difficult to delightful.

Read about our other aged ham here!

> COME GET A TASTE OF BROADBENT COUNTRY HAM AT THE DELI!