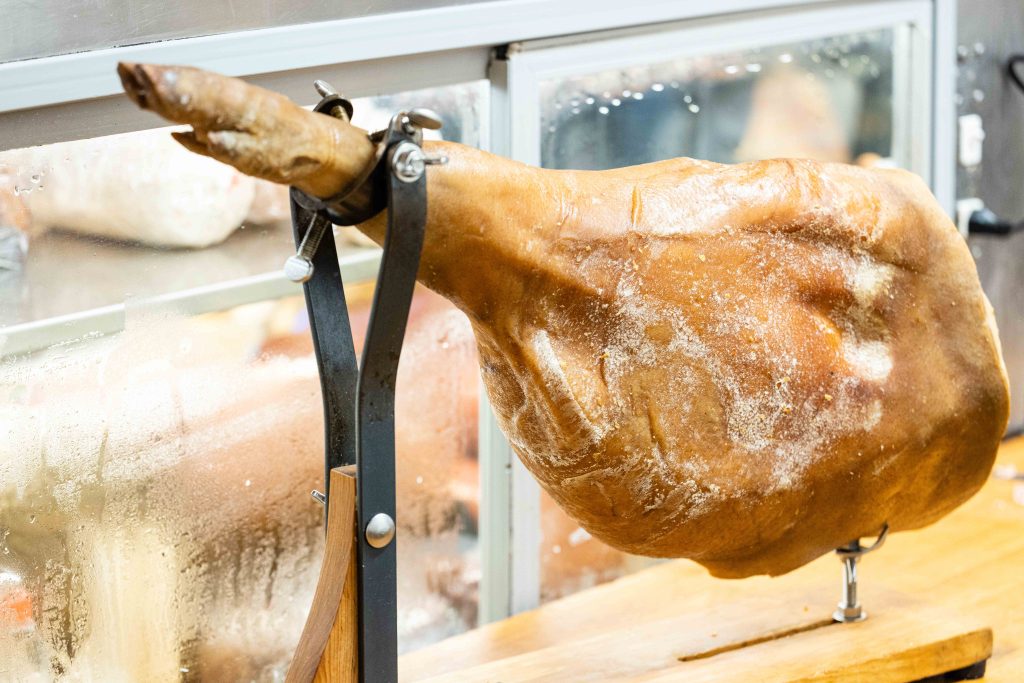 Enjoy eating Prosciutto di Parma?  Appreciate the amazing old-school country hams of Appalachia?  Or maybe you just love great food and want to take advantage of what is probably a once in a lifetime chance to taste something really special?  For any or all of those reasons, or for some other thing that I haven’t yet considered, make sure to take a few minutes to swing by the Deli ASAP and score a few slices of this very special, very limited edition, country ham from Eastern Tennessee.

I wrote a lot about Allan Benton in Zingerman’s Guide to Better Bacon.  He’s on my mind this week though because Connor Valone who works—with wit, wisdom and a wonderful sense of culinary history—behind the meat and cheese counter at the Deli reached out to tell me about this amazing ham he was about to cut into.

I wanted to let you know about a super special ham I got my hands on at the Deli that I’m preparing to unleash unto the world next week.  Back in late February, [long-time Specialty Foods manager] Sean Hartwig and I traversed down to the Ham Belt, visiting some of our friends at Smoking Goose in Indianapolis, the affable folks at Broadbent and Newsom’s in Western Kentucky, across Tennessee to Allan Benton, and finally rounding out our trip with a barn-stay with the Mattingly’s at Kenny’s Farmhouse Cheese.

This route, for those who don’t know it, is a bit of a holy road for American artisan food fans.  You can try all those great products across the ZCoB pretty much every day.  With that bit of context, I’ll let Connor continue: 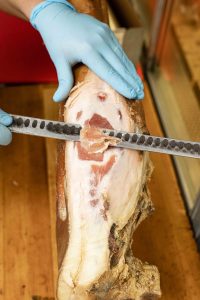 Deep within the yellowed walls of Benton’s aging rooms I happened upon a few racks of heritage hams that Allan himself had sourced and cured. Heritage breeds have been extremely difficult to obtain since the onset of the pandemic, so I felt like I’d stumbled upon a goldmine at Benton’s once I saw those red and black hairs on some seriously rustically trimmed legs. I eventually mustered the courage to ask Allan if I could purchase one of the Red Wattle legs for the Deli, which he coyly but generously acquiesced, so long as I didn’t come hollering for another “secret ham” or continue to ask for his raw product source!

Weighing in at an impressive 23 pounds and change, the ham has a long, stocky leg, and is hoof-on, still showing off many of the signature burgundy hairs clinging to the skin- it’s a beauty for those with eyes to behold it. Allan trimmed, rubbed, and hung the ham just before the holiday season in 2020, making this ham about a year and a half old!

Cut thin as Connor and his Deli counter colleagues can do, a quarter pound goes a long way.