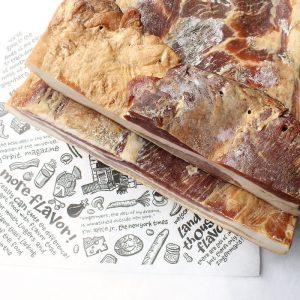 When I think about joy, Allan Benton is one of the first people who comes to mind. Most folks who’ve met him will likely say much the same. While I know enough about human beings to know that Allan, like the rest of us, certainly has his hard days, he is about as joyful a person as I’ve met. With all that in mind, I gave him a call this weekend. As it always does, it gave me joy to hear him talk. Allan and I don’t just share an appreciation for great bacon; we also think similarly about business. He loves what he does, he’s as dedicated to the craft as ever, and he cares deeply about the people he works with and the community of which he’s a part. When we chatted the other day, he said, “Ari, I’m 74 and I have no interest in retiring! I love what I do!”

The flavor of Allan Benton’s bacon is as big as his heart and as bountiful as his joy seems to be. If you like your bacon really big in flavor, super smoky and superb, Benton’s is for you. Benton’s smokehouse is in the fairly out-of-the-way town of Madisonville, Tennessee—all the way to the east, between Knoxville and the North Carolina border. While Benton’s has become a much talked about and highly praised place in the national press over the last ten years or so, like Allan himself, it’s about as down to earth and down home as you’re gonna get. “I was born so far back in the hills of Virginia that you had to look straight up to see the sun. We were desperately poor even by Appalachian standards,” he went on smiling, “but I didn’t know that. Neither side of my family owned an automobile. Neither owned a tractor. They took a gooseneck hoe, and they farmed the land like that. They actually raised almost everything they ate.” (For the full Allan Benton story, read more at Southern Foodways.)

To craft their bacon, the folks at Benton’s rub fresh pork bellies with brown sugar and salt and then leave it to cure for (a very long time in the pork world) four- to four-and-a-half-weeks. The bacon gets about 48 hours in the smoker, almost always over hickory—it’s a serious smoke. Benton’s is not something that will sit casually on the edge of your eating. Its flavor is an intense confluence of smoke, salt, and sweet all at once. This is bacon to use when you want the bacon to take charge of the dish. I use it a lot with full-flavored fish, with Anson Mills’ grits, and good eggs. It’s terrific for BLTs, and it’d be great if you want to add bacon back to the vegetarian Red Rice (read on!). What makes it so great? “The secret is that there is no secret,” Allan answered smiling, with his ever-graceful hill country accent in full swing. “This is just the way bacon was made years ago.”

> Our tips on how to cook the perfect bacon!