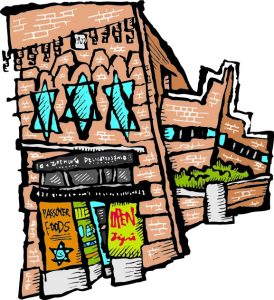 It’s no secret that the Deli has Jewish roots, and you might even know that some of our traditional Jewish recipes come from the grandmothers of our co-founders, Paul Saginaw and Ari Weinzweig. We believe it’s important to honor the history behind our food traditions and share as much information about them as possible with our community of guests, staff, and food lovers.

As a Jewish deli, many of the questions we get about our Jewish foods are kosher-related. So today we’re answering three of our most frequently-asked kosher questions: What does kosher mean? Are we a kosher deli? And, what kosher products do we sell?

The most straightforward answer is that kosher foods are those that conform to Jewish dietary rules.

Over the centuries, Jewish religion and practice has expanded and become more codified. Many of these practices were written in the Talmud (the primary source of Jewish religious law) over two thousand years ago, but Jewish law is continually adapting to respond to modernity. Adherence to Jewish law goes on a spectrum from very close observance to less observant of the laws. Additionally, Many Jewish people identify themselves as part of a religion, a race, an ethnicity, a culture, a shared history, or some combination of these. It’s acceptable to identify with one or more aspects of being Jewish, and to have a highly individualized practice and Jewish identity; so, keeping kosher can mean different things to different people.

Thus, there are many different meanings behind the seemingly simple question, “Is this kosher?” Some might be interested in strictly kosher items, which means they’re permissible by Jewish law, prepared following Jewish law, and processed using only kosher utensils. Strictly kosher items will always have a symbol on them indicating that they have been supervised and approved as kosher. Others might be trying to make sure that the item doesn’t have pork or shellfish in it or that a dish doesn’t contain both milk and meat. During Passover, the same question could be asked to make sure that an item doesn’t have leavened grain in it. Finally, some others might be simply looking for Jewish-style foods.

We are a Jewish deli, but the short answer is no, we’re not a kosher deli. (Though we do sell kosher products, more on that below!)

Our co-founders, Paul Saginaw and Ari Weinzweig, wanted to create a place where you could get good deli food, like they did in Detroit and Chicago where they grew up. They knew they wanted to sell all of the Jewish foods they’d grown up with, like corned beef, latkes, matzo ball soup, and chopped liver. But they also had the radical idea of selling what we now call “specialty foods” in their little 1,300-square-foot space as well: olive oil, salami, tinned fish, and the like. As a result, they opened a unique delicatessen, where a guest could get a classic corned beef reuben, but also pick up neighborhood favorites like ham hocks and bacon. The selection of grocery foods we carry has changed over the years, but we continue to take the time to get to know our producers and bring you great-tasting foods from around the world, with something bound to appeal to just about anyone! 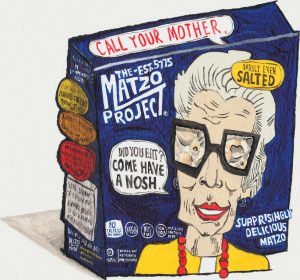 We also have many full-flavored, traditionally certified kosher products to stock your pantry. Hebel & Co halva is handmade in Los Angeles, California with organic ingredients, no preservatives, and no artificial flavors (we carry 4 different flavors!). The Matzo Project makes such good matzo that we updated our classic, decades-old matzo ball recipe to use it. Our housemade pickles are kosher, as well—choose from fresh, crunchy New Pickles or garlicky Old Pickles. Those are just a few of our favorites! We also carry several honeys, preserves, chocolates, nut butters, and more that are certified kosher. Browse our kosher foods and shop online.

We’re always happy to review ingredients with you to ensure you’re getting something that works for you and your guests. And if you’re looking for help with cooking or serving a meal, whether it’s for a bar or bat mitzvah, wedding, shiva, or holiday celebration, our catering team is here to help.

Have a kosher question that we didn’t cover? Contact us!