Matzo worth updating a classic recipe for

It’s true, a few years ago, we were so blown away by the taste, quality, and values of The Matzo Project matzo, that we updated our classic, decades-old matzo ball recipe to use their matzo. But we also wanted to make sure to spread the word about the dynamic duo that founded The Matzo Project as well as what makes their products so special, so that they can earn a spot on your next cheeseboard or in your next matzo ball-making event, too.

Ashley Albert and Kevin Rodriguez are the founders of The Matzo Project, declaring their business venture, “an idea that spiraled out of control!”—in the best possible way, as you’ll soon see.

First things first, though. If you’re not familiar with it already, unleavened bread, like matzo, is historically connected to the Jewish holiday Passover. But as Ashley and Kevin acknowledged during a matzo tasting event with us last year, people can be intimidated by matzo if they didn’t grow up with it, so they set out to create a cultural product more than a religious product. With that goal in mind, it was easier for them to deviate a little from the matzo traditionally served at a Passover seder that’s made with only flour and water. Their recipe is still simple—made with flour, water, sunflower oil, and sea salt—but they were able to add flavors and play with the form (like chips!) because they wanted to share matzo with a broader audience.

They explained that they realized that matzo, in the end, is really just a good simple study cracker that you can put pretty much anything on. Ashley elaborated, sharing that her tagline for their matzo is: “more versatile than a pita chip, more flavorful than a water cracker, and more elegant than a saltine.” And went on to admit she’ll sometimes leave a bag of their matzo chips out at a party and just watch how people use them—someone’s dunking them in black bean dip, someone else is putting cheese on one, and someone else is eating them out of hand like chips.

How The Matzo Project Came to Be

Ashley and Kevin grew up together; they even attended summer camp together as kids! Ashley had half-jokingly floated the idea of an artisanal matzo factory to a neighbor many years prior, in an attempt to convince her not to sell their family pizza place and pizza oven. Needless to say, the neighbor didn’t run with the idea, so when Keven was looking to make a career change, Ashley told Kevin that they should! (Ashley describes herself as a big idea person, so it might not come as too much of a surprise that she’s also founded a shuffleboard club and is the lead singer of a kids rock band.)

Kevin took on the challenge of perfecting a recipe, each time, making slight changes in the amounts of those four ingredients, and dropping off numbered paper bags of samples to Ashley until they finally hit on the one perfect combination. Fun fact: in these early days of testing, Kevin had a little spiral notebook that he would write in, and well before they had a final product, he wrote down a list of stores that would be a dream to get their matzo in. Reader, guess what deli was number 1 on that list?!

Now that you’re, no doubt, ready to nosh, these are all of The Matzo Project products that you can find here at the Deli:

Matzo Crackers: Toasty, crispy, small-batch large crackers (they call them “flats”) in either Salted or Everything.

Matzo Chips: A super-snappy, extra-sturdy, crazy-versatile snack that goes with every single thing.

Matzo Ball Mix: Makes floaters! Or sinkers! Whichever you prefer! These matzo crumbs are what we use to make our Matzo Balls for our matzo ball soup. Pick up a quart of our Chicken Broth and you’re good to go.

Chocolate Matzo Wonderclusters: A sweet treat that we have exclusively around Passover made with the unleavened goodness of Matzo Project Matzo and either handcrafted Belgian milk chocolate and peanuts or dark chocolate, coconut, toasted rice, and toffee. 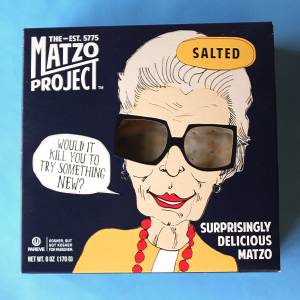 Once they did land on their final product, the next step was designing the packaging. Since Ashley had been marinating on this idea for so long, she already had a concept of what she wanted it to be like, prominently featuring a “hip, cool, funny, smart grandma.” It was a grandma archetype that really resonated with both Ashley and Kevin (they sent their illustrator photos of their own grandmas to work from!), but one that they didn’t feel was very visible in common culture (unlike the stereotypical sweet, maternal grandmas or grumpy, cane-shaking grandmas).

One of the things that has surprised and delighted Ashley and Kevin the most is how many people come up to them and talk to them about the grandma on their packaging, saying, I know she’s supposed to be Jewish, but this is my Italian grandmother, my Indian grandmother, my Korean grandmother, Jamaican grandmother…” The fact that she’s so relatable to so many people really embodies their whole goal of creating a product that’s not just for Jewish people but rather is a way for them to share their culture with others.