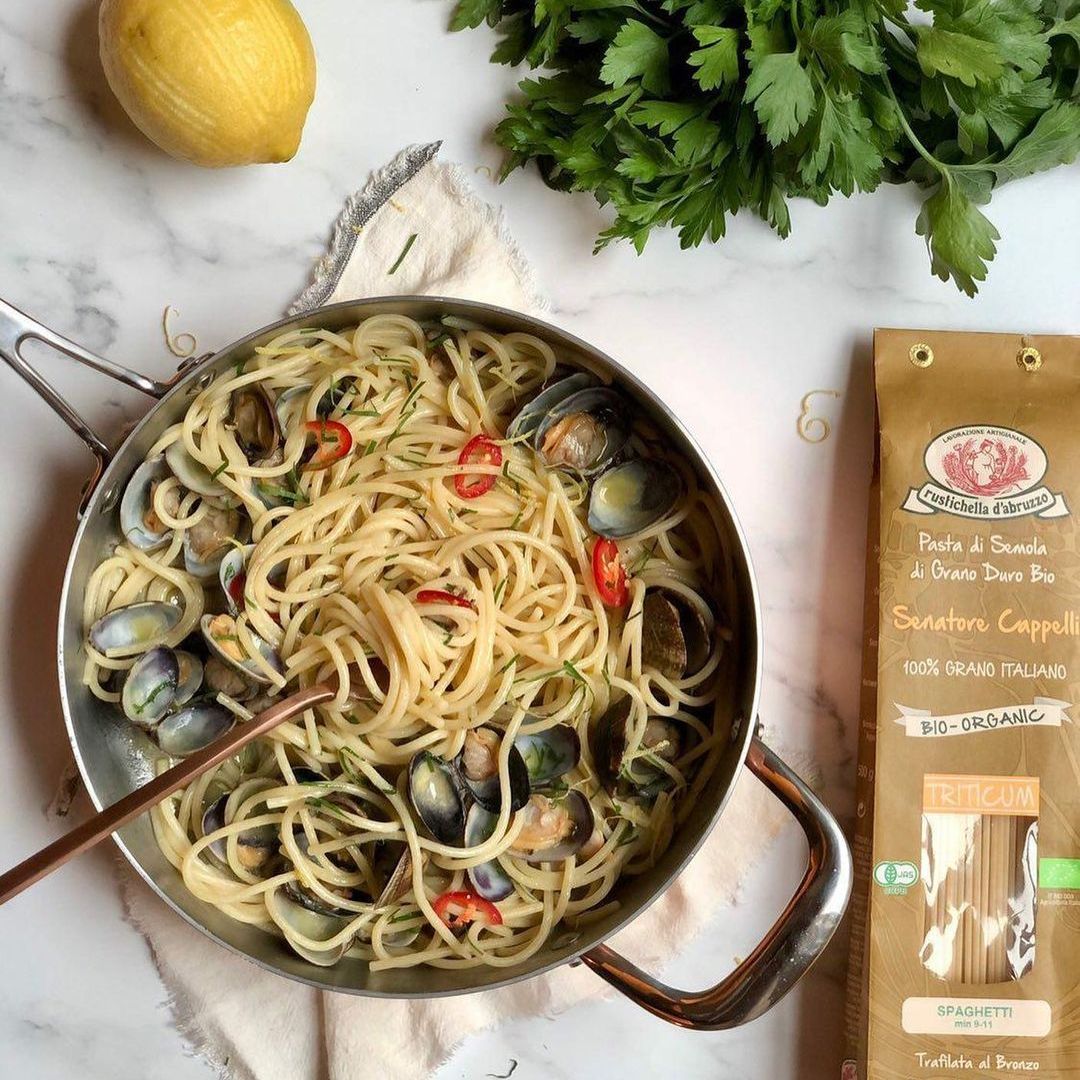 Rustichella uses multiple different types of wheat, including heirloom and organic varieties. You will find some of the Rustichella varieties labeled “Senatore Cappelli.” This is a wheat variety that has been cultivated since 1915 for pasta making. It is named after the Abruzzese Marquis Raffaele Cappelli, born in San Demetrio né Vestini, Senator of the Kingdom of Italy and promoter of the Agrarian Reform. Zingerman’s co-founder Ari Weinzweig has written about this wheat, saying,

In 1924, when the Peduzzi family got going, Senatore Cappelli wheat would have been cutting edge—in the 1920s it accounted for nearly three-quarters of the durum wheat grown in Italy. As with almost all the old varieties, flavor is higher, but yields are low, and the wheat is difficult to grow. Today it’s a tiny part of Italian wheat production. Senatore Cappelli is an autumnal variety, and it’s ideal for organic farming like this due to its considerable height, which can reach 4 feet. The resulting semolina from the Senatore Cappelli has a bright amber-ish, yellow color and so does the pasta that’s made from it. The pasta has a subtly sweet, malty flavor and pleasing supple texture. 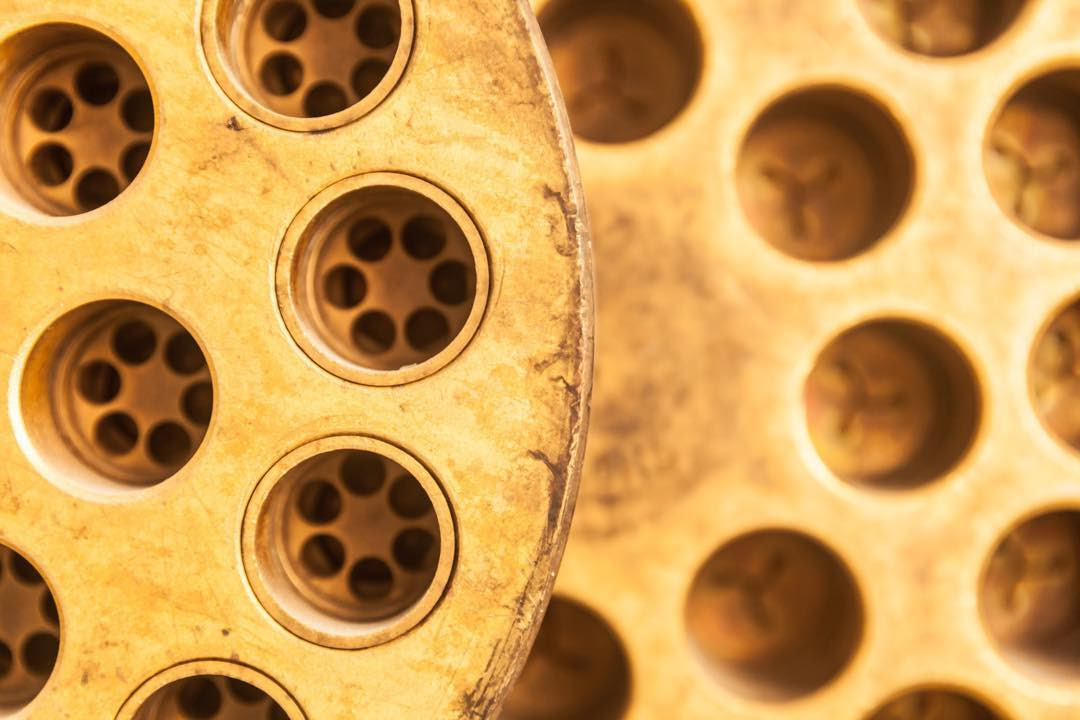 We love the quality of Rustichella’s products and their adherence to traditional methods. They’re committed to using bronze dies to give the pasta just the right roughness to hold all kinds of sauce. And, believe it or not, the slow-drying process actually has a big impact on the pasta’s flavor.

Rustichella continues to make their pasta the traditional way, but they are also always looking to innovate. They have brought to our tables many regional specialty shapes of pasta, such as Trofie (one of Rodger’s favorites) and Orecchiette (not only one of Ari’s favorites, but also specially requested from Rustichella for a White House dinner!)

Rustichella Pastas from A to Z (Okay, not quite, but close!)

Alfabeto: These shapes are not just for kids, but they sure do make mac and cheese or soup more fun!

Fettuccine: These “ribbons” of golden semolina, often associated with alfredo and other cream sauces, are great with all types of toppings!

Lasagna: Or as we like to call lasagna: pasta cake!

Organic Linguine: Slim flat noodles that are so versatile! We just drizzle with extra virgin olive oil. This is a noodle begging to be slurped!

Organic Penne Rigate: Beautiful amber hue with a sweet and malty flavor. This pasta embraces all sauces and pairs gracefully with whatever is in season. 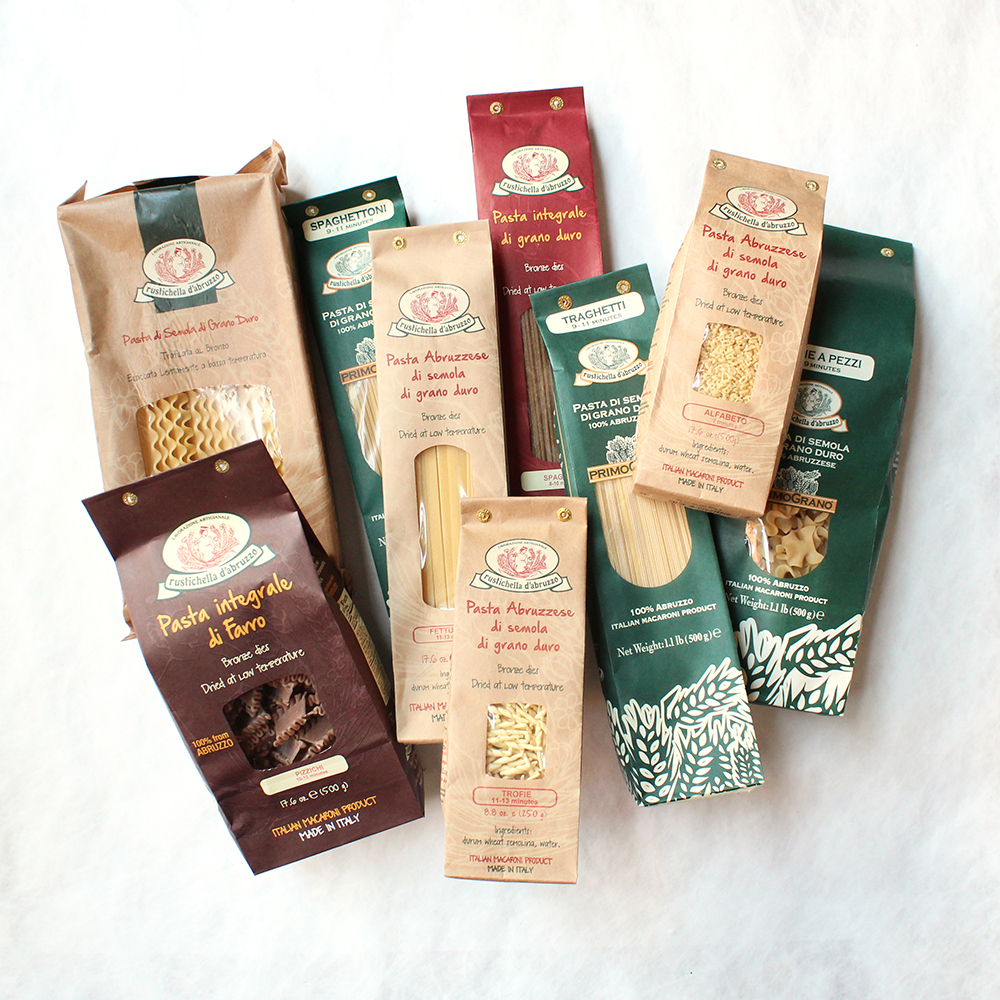 Organic Timilia Ziti: Timilia wheat is an ancient variety of durum wheat that is stone ground. It has a rustic nutty flavor, that pairs well with capers and anchovies or a classic tomato sauce.

PrimoGrano Sagne e Pezzi: A ruffled pasta shape that holds sauces well. Serve with simple garnishings to highlight the flavor of the pasta itself!

Saragolla Rigatoncini: A taste of history. Saragolla is an unhybridized variety of wheat that’s been grown in Abruzzo for centuries and is prized for its nutty flavor and high-protein semolina. This award-winning pasta is made from an organic, stone-ground, semi-whole wheat selection of Saragolla and extruded into a deeply-ridged medium tube—made for simpler sauces that allow the pasta’s flavor to stand out.

Senatore Cappelli Spaghetti: Made with the Senatore Capelli wheat described above, this pasta has a sweet, malty flavor and pleasing supple texture. Serve with olive oil-based sauces or a simple tomato sauce so you may enjoy its taste and texture.

Timilia Busiate: Made with an ancient, stone ground Sicilian grain. Traditionally, this shape is paired with pesto Trapanese and seafood.

Trofie: These small twists are perfect for pairing with Ligurian pesto.

Whole Wheat Spaghetti: Made in Abruzzo, this pasta is truly a work of art. Dried slowly over two days, it has exquisite flavor and texture. 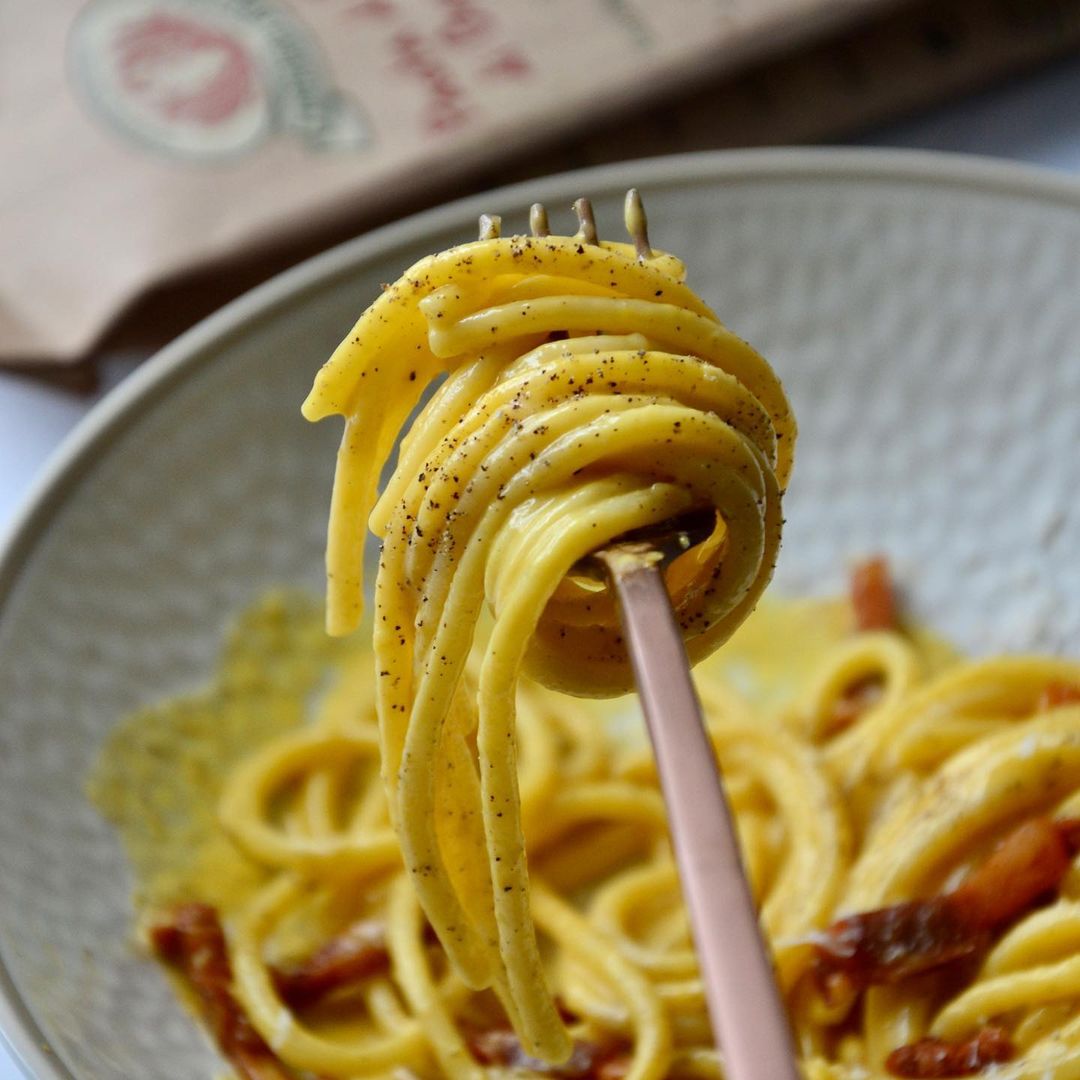 A Primer on PrimoGrano Pasta from Ari

The PrimoGrano has a flavor that’s very special, sort of luxurious, but in an understated, modest sort of way. It’s now a regular on my list of favorite pastas. 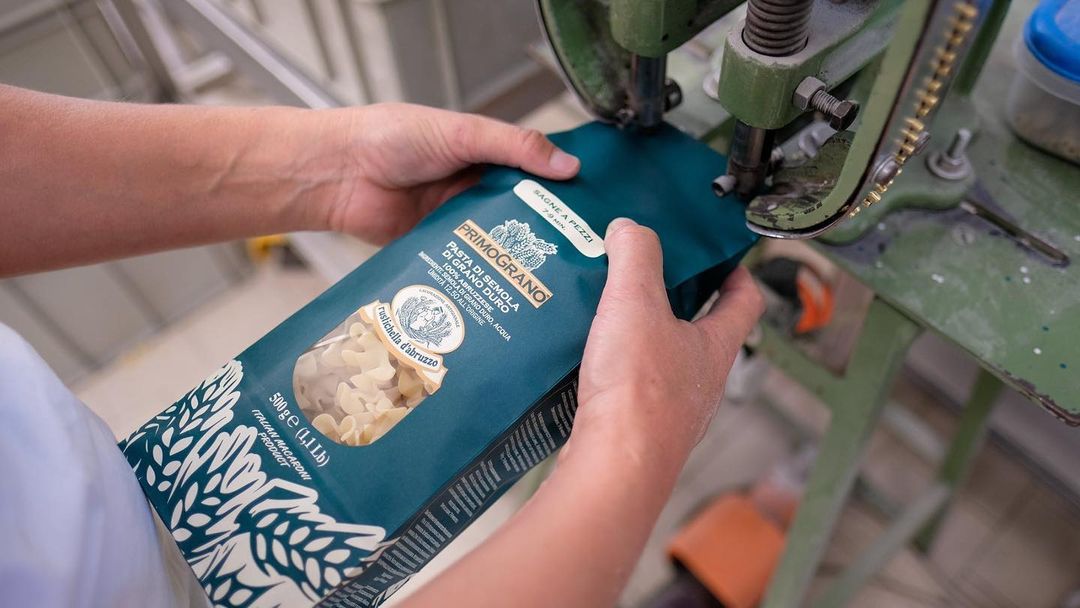 Having eaten it regularly for the last few months, I will say that I really like this stuff, both for the pasta itself (pretty terrifically tasty) and for the project overall. The latter is really representative of most of the things I think go into making a special business ever more special. It’s really no small thing. You have someone who’s achieved a great degree of success, whose product is sold all over the world, is known for being among the best around. But instead of standing pat, Gianluigi Peduzzi, who runs Rustichella, has invested enormous amounts of energy, time and I’m sure money to make something special happen.

“We start to make the pasta in 2004 for the eightieth anniversary of the company,” he told me this summer. “We worked with the University of Foggia in Puglia [a few hours south of his hometown of Pianella], and we started to study the new variety of grain. We finished this variety — what we call ‘San Carlo’ — in 2002. The yield is lower, but the flavor is very good. We did the first experiment in 2003 to grow three hectares. Just to make a small amount to taste for the eightieth anniversary.”

And now, the PrimoGrano is ready for you and me to eat regularly.

“I wanted to make a product the way it was in 1924,” he told me and as he talked, I realized that while he wanted to re-create the pasta of his grandfather’s era, in fact, he was driven—respectfully—to make something even better.

“In 1928,” he continues, “there was this pasta made by my grandfather, Gaetano Sergiacomo, with 100 percent Abruzzo wheat. But back then it was made without very good technology. When you cooked it, the taste was good, but the texture wasn’t as good as what we have today.”

Modern technology has actually helped make the pasta better than it was back when Gaetano got going. “With San Carlo,” Gianluigi explained, “we can make the pasta again with 100 percent Abruzzo wheat. San Carlo is 80 percent, but we also blend the Varano, Quadrato, and Mongibello varieties. And now we have the techniques of today so that the taste is like it was then but the texture is much better.”

While the PrimoGrano project was triggered by Rustichella’s eightieth anniversary, this isn’t about doing a one-off pasta for PR purposes. To the contrary, it’s all very holistic and long-term — the idea is to get the San Carlo grounded in local agriculture, then build enough demand for the pasta to keep it going. And in the process provide consumers with a great-tasting product and farmers with something special to grow. “I wanted to work with the farmer,” Gianluigi said. “It was the same area of the province that my grandfather bought the grain in the past. Many farmers would deliver the grain to his factory. And instead of the money, he gave them the pasta.” I’m sure the farmers today get plenty of pasta as well, but Rustichella is actually paying more per kilo to keep them growing this special wheat: “We pay to the farmers 10 to 15 percent more for the San Carlo than for the normal market of the grain. Plus, we pay one Euro for the farmer to cultivate only this variety. And two Euros for every percentage protein over 16 percent. So about 20 percent more.”

All the other good stuff then goes into play. The milling is done at Rustichella’s usual spot, one of the smallest mills in Italy now, which specializes in custom work like this. The dough is extruded through the bronze dies, and then dried very slowly. The pasta actually cooks up fairly quickly—Gianluigi says this is because the Abruzzo wheat is a bit lower in protein than the imported wheats that are blended into their other pastas. The flavor is wheaty, delicate, and really pretty delicious.

Elizabeth Minchilli, a food writer who grew up in St Louis and has lived in Rome for over twenty-five years now, loves it. Given where she lives (in the middle of Rome) and what she does (food writing—the woman can get pretty much any pasta she wants and has probably tried most everything at some point or another), that’s no small compliment. “I really liked the taste of the pasta. It didn’t seem so neutral like most pasta, but had a distinctive, sort of nutty/wheaty taste to it. Also, it was chewier, and more resistant, and had a better texture.” I’d agree.

To bring out the best of the wheatiness, I’ve been dressing the pasta lightly—just fruity green olive oil and grated cheese; sautéed zucchini and bits of fried pancetta; white beans, fresh rosemary, a touch of well-sautéed celery, and a generous dose of good olive oil.

Special thanks to Manicaretti Italian Food Importers, an exceptional importer of extraordinary foods, for helping us bring this delicious Italian pasta to our shelves and for their generous support of this message.  And to Rustichella d’Abruzzo for allowing us to share their beautiful photos.