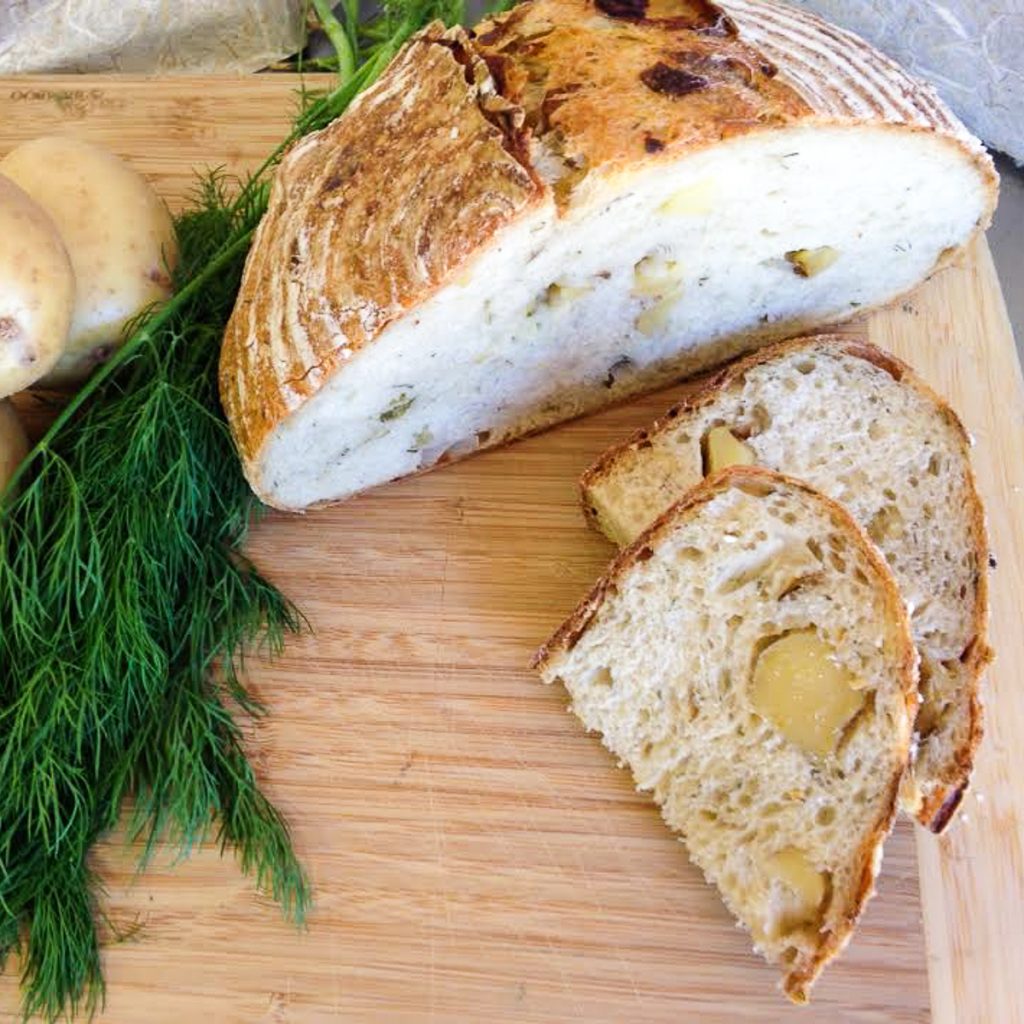 One of my long-time favorites from the Bakehouse is making a rare special appearance this coming weekend. I figured I’d give you the heads up so you can pick up a couple loaves for your house, same as I’ll be doing for ours. A sourdough base (made with organic wheat flour) that takes about 18 hours to rise is bucked up with broken-up pieces of roasted potatoes, then seasoned with a generous bit of fresh dill and scallions. The loaf has a great lively, full flavor. I like to eat it ripped right off the loaf on the way home from the Bakehouse. Of course, you can also slice it and use it for toast or sandwiches. It’s great with the Creamery’s Cream Cheese or Goat Cream Cheese, or just a bit of good butter.

For many people, potato bread evokes images of comfort and familiarity, but a few hundred years ago, the idea of putting potatoes into bread was rather provocative. Back then, this was a cutting-edge culinary “innovation” advocated by a French pharmacist and agriculturalist named Antoine-Augustin Parmentier. In Europe in the 18th century, potatoes were not well accepted. Having come back from the Americas as part of the Columbian Exchange in the early 16th century, they were dismissed by scientists (who believed potatoes led to leprosy), the church (which argued potatoes provoked lust), and chefs (who thought they were bland). Parmentier became the potato’s biggest advocate in Europe. Potatoes, Parmentier preached, could help to cut costs (wheat was more expensive) and add flavor. Clearly, his work worked out—today potato breads are staples in the cooking of Ireland, France, Germany, and Scandinavia. And the Bakehouse! The anniversary of Parmentier’s birth (on August 17, 1737) makes this a particularly good month to celebrate his boldness in introducing this new approach to baking.

Swing by the Deli this weekend and score a few loaves of potato dill bread. They freeze well, so if you’re a fan you can put a few away to break out this fall for a football game. Reheat in a 350°F oven until they’re hot in the middle and the crust is crispy, and you’ll be very happy you did.

Potato Dill is a seasonal item that is available at the Deli several times throughout the year.

Read about our sourdough classic, (Better Than) San Francisco Sourdough!

> THIS IS A SEASONAL ITEM. CHECK HERE FOR AVAILABILITY!