A terrific taste of the Gold Rush era 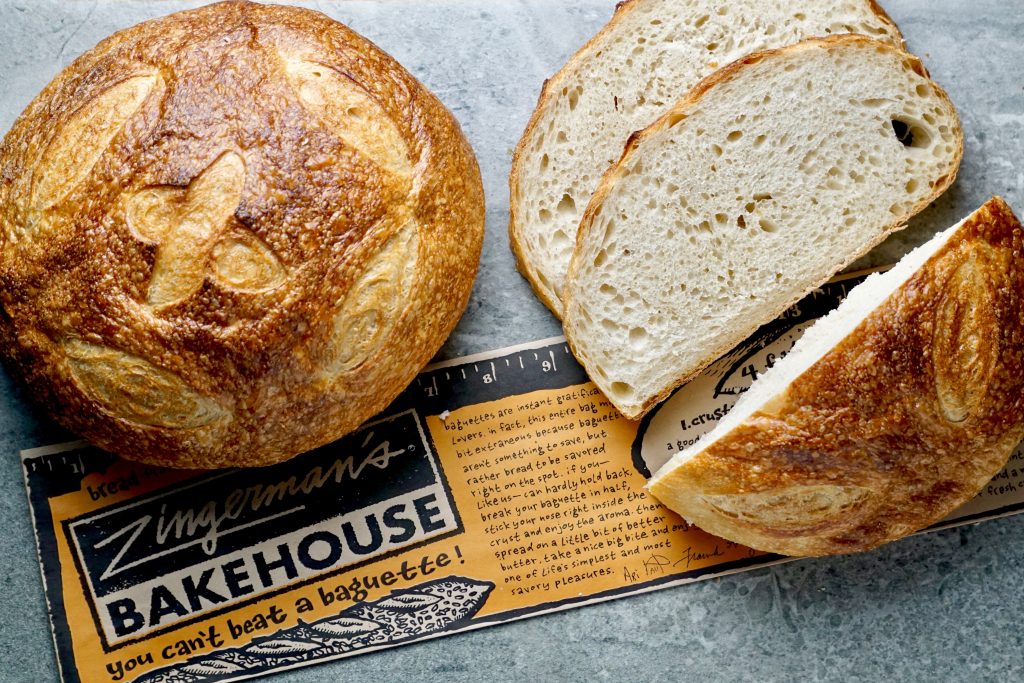 Just to be clear up front, the “(Better Than) San Francisco” piece of the name comes not from some sort of competitive drive to be the “the best,” but because baking here in Ann Arbor, half a world away from the Bay Area, we’re not allowed to use the name “San Francisco.” “Better Than” was a tongue in cheek attempt at a creative solution. That said, I will say that to this day we ship many loaves of this out to the Bay Area, and many customers have told me over the years that it is what they remember “their” sourdough tasting like back when they were kids.

We’ve been baking sourdough for nearly thirty years now—it was one of the “original eight” breads on our list. The history of the bread is much longer than that, and far older even than San Francisco. The Egyptians were using starters to leaven their breads something like 6,000 years ago. They would hold back some of the dough from one batch and then use that older, more acidic dough to start the fermentation of the next. This is still basically what sourdough bread is today. The sour works by attracting and/or retaining “wild yeasts” in the air to raise the dough. At the same time, Lactobacillus bacteria eat the natural sugars in the wheat and add the characteristic sour taste to the bread.

Shifting back to San Francisco, the bread and its popularity boomed during the Gold Rush Era. In January of 1848 gold was discovered in nearby Coloma and the “rush” quickly followed. At the time California was still occupied territory, having been taken from Mexico by the American military. During the Gold Rush, the population and the economy in California boomed and California became a state in 1850, but the price was paid by Native peoples who were pushed off their land and decimated by disease. The bread was a byproduct, but it has lasted much longer than the actual Gold Rush during which it gained fame.

As thousands of people raced across the country to get to California for the Gold Rush of 1849, sourdough was really the only method they had to raise bread. Commercial yeast wasn’t on the market until 1869, so using a starter of leftover dough to make the next batch rise was about the only way wagon travelers and miners living out in rural areas were going to get anything other than flat bread. To help keep their starters alive while traveling, many folks carried small bits of their sour in pouches looped onto their belts—their body heat kept the sour alive while going cross-country. Once in California, miners often stored starters up in the warmth of the rafters of their cabins or even slept with them to keep their sours from freezing in the cold winter months.

The Bakehouse’s (Better Than) San Francisco Sourdough is true to these old Gold Rush-era recipes. Natural sour starter—rather than the more modern commercial yeast—is used to develop both the flavor and texture of the finished loaf. It takes about eighteen hours of rise time for the dough to develop its full flavor before being baked on the stone hearth. The key to this, or any good sourdough bread, is balance: noticeably sour, yet not at all over the top. It’s got a crackling, crisp crust, a wonderful sour tang, and a great chewy texture. The Sourdough’s popularity continues to grow steadily, and over the last few years it’s become our biggest seller in the Bakeshop. I agree with Bakehouse managing partner Amy Emberling who said, “I really enjoy the thin, crisp crust—it’s very distinctive.” Coincidentally, I was speaking with a long-time customer a few years ago, who shared how she had grown up in San Francisco eating the old sourdough there. “Of course,” she said with a smile, “I like what you’re making at the Bakehouse a lot more than that. But back at the time what we had sure seemed good.”

Be sure to check out our other sourdough breads– especially our Detroit St. Sourdough!