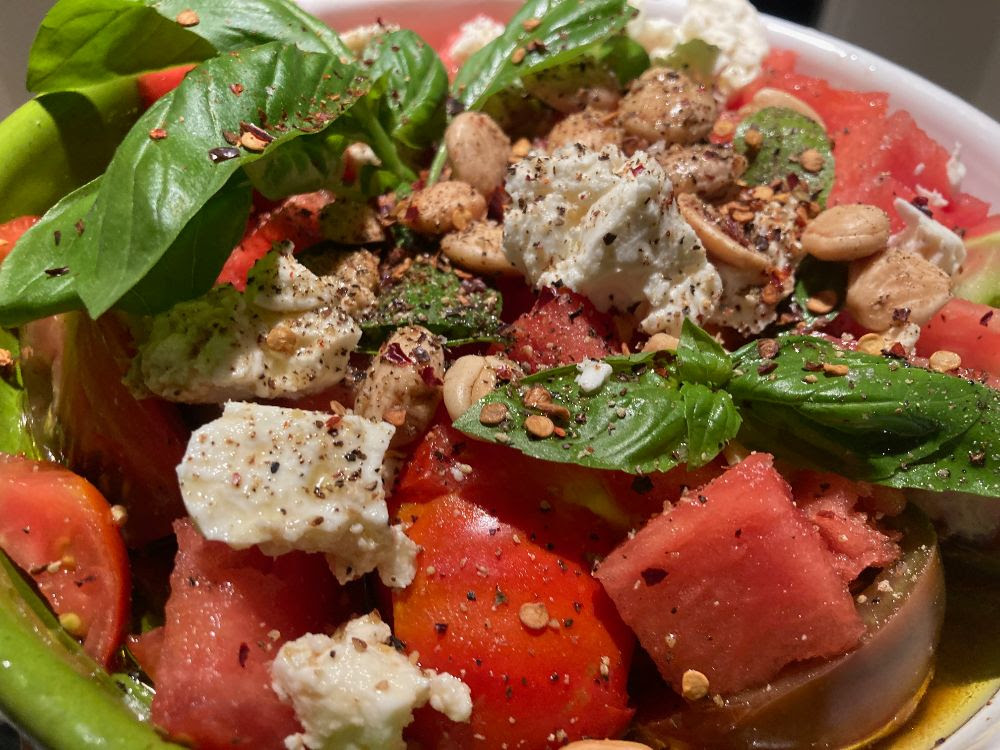 The other evening Tammie mentioned something to me about putting tomatoes and watermelon together in salad. Falling back, as we all can do to unconscious biases, I pushed the idea aside. It “sounded strange.” A few days later I gave it more thought. Tomatoes and watermelon, I realized, both fruits, each tastes terrific on its own, so . . why not put them together? Tammie’s suggestion, it turns out, was superb; the salad is lovely and easy to make. And like so many beliefs that I’ve changed, once I’ve adopted the new one, it’s hard to understand why I held onto the other for so long.

Watermelon, if you don’t know its history, was first domesticated in Africa—seeds have been found by archeologists working in Egypt and what is now Libya, both to the north of what is now Niger. (It’s not hard to imagine traders carrying some south to Niger to sell to wealthy members of the royal courts.) Watermelon cultivation is one more important, though rarely acknowledged, contribution from the African continent to what is now everyday American eating. Tomatoes, are the opposite, native to the western hemisphere. Put the two together and we have a lovely taste of two continents in one beautiful bowl.

Here’s how I put the salad together, though of course you can alter it at will to fit your taste: Cut wedges of ripe heirloom tomatoes and then comparably sized ones of watermelon. Put them on a nice platter. Sprinkle on crumbled feta cheese or fresh City Goat cheese from the Creamery. Add a good bit of fresh basil leaves (or mint or other herbs)—I like to leave the leaves whole for looks but you can also tear them into smaller pieces. Dress the salad with some of that great honey vinegar we have and extra virgin olive oil, then sprinkle on some sea salt and a good bit of freshly ground black pepper. Toasted almonds are a good addition, as are good kalamata olives—the bitterness of the olives is a nice match with the sweetness of the fruit. I finished the salad with the really great smoked spicy Bukovo Greek chili flakes we get from Daphnis and Chloe.

The whole thing took far less than ten minutes to make, it was lovely, and it tasted terrific. Eat it now while the fruits of summer are ripe and ready.