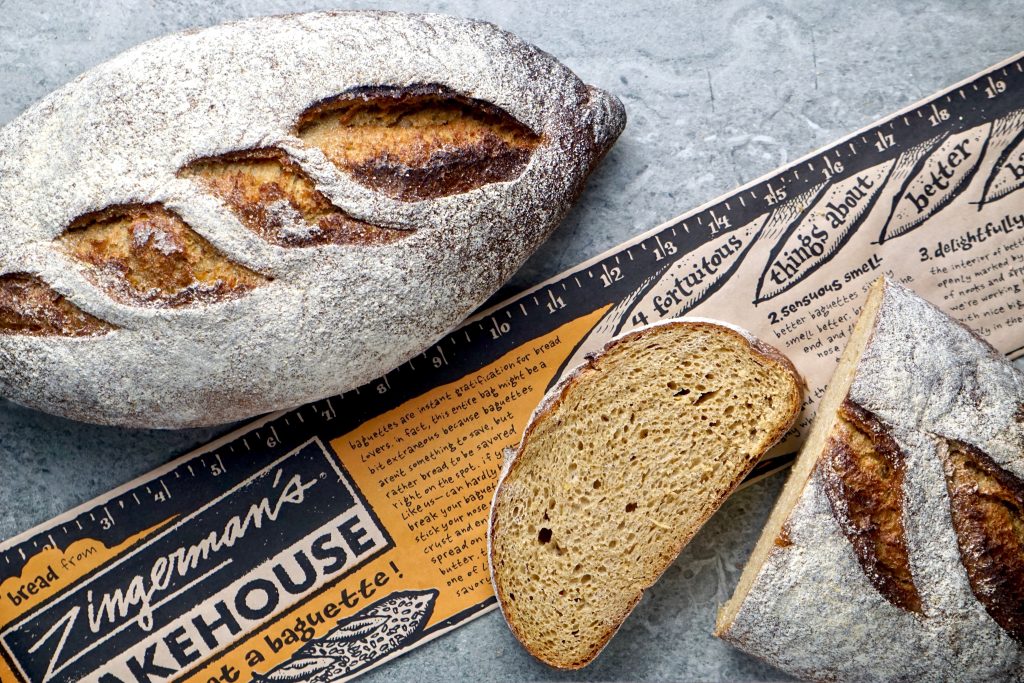 This bread has been one of my favorites for nearly 19 years now, ever since the Bakehouse crew did the work to make this old-American recipe anew for what was about to become Zingerman’s Roadhouse. Over the years, its following in the Zingerman’s ecosystem gets bigger and bigger. I think it’s been particularly tasty of late, which prompted me to put together this piece. If you’re going on a picnic, making a sandwich, or just planning on having toast for breakfast tomorrow morning, give some thought to using some of this wonderfully delicious, old-American bread.

While what we call Roadhouse Bread was unfamiliar to us back in 2003, it was a very popular loaf amongst 18th and 19th century New Englanders. Back then, it was generally known as “Rye ’n’ Indian” or also “Thirded” bread. Though you’ll find a recipe for it featured in nearly every American cookbook from that era, for whatever odd reasons of historical trends, it fell completely out of fashion in the 20th century. (As far as I know, we’re still the only ones in the country that bake it commercially.) As it would have been 200 years ago, Roadhouse Bread from the Bakehouse today is made with a mix of organic wheat, rye, and corn, subtly sweetened up with a bit of molasses. The bread’s history is, for better and for worse, a coming together of many of the streams of American history, culinary and otherwise. Its origins go back to early years of European presence in the Americas. Europeans were insistent on eating wheat, but since it wouldn’t grow well in the cold climate of New England, colonists eventually gave in to reality and began to bake with indigenous corn, grown for thousands of years by Native people. British settlers also eventually turned to growing rye, which does better in colder climates (hence its wide use in Russia and Scandinavia). The loaves were typically sweetened with molasses, cultivated on plantations in the West Indies by enslaved people who were never paid for their hard work.

A few years ago, as part of the inspiring and insightful Grain Commission project, we began to mill our own rye berries (which we get from a farm in western Illinois) right here at the Bakehouse. That innovative work took an already great bread and made it better still. Fresh milling like this, we’ve learned repeatedly over the last few years, adds flavor and leaves natural nutrients intact. Studies are showing that this simple act makes an enormous difference in bread’s impact on our bodies. It also improves the flavor and texture. There’s just something more vital, livelier, a touch lovelier, and the texture seems to hold its moisture longer. A few years ago, we raised the bar even further when we switched to use cornmeal from Janie’s Mill in Askum, Illinois.

The Roadhouse Bread makes super marvelous toast—I love it with either the Creamery’s cream cheese or fresh goat cheese. It’s really good when you “double bake it”—put the whole loaf back in your oven at home at 350°F (unwrapped) for about 20 minutes. The crust gets crustier, the Maillard reaction works its magic, the sugars get sweeter, the crust gets darker, and the corn gets toastier. The Roadhouse Bread is on the totally terrific toast menu at the Coffee Company, where we serve it with Pimento Cheese from the Creamery. Try slices of Roadhouse Bread with the American Fried Bread on page 162 in Zingerman’s Guide to Better Bacon, or use it for a grilled cheese. I love making croutons from it!