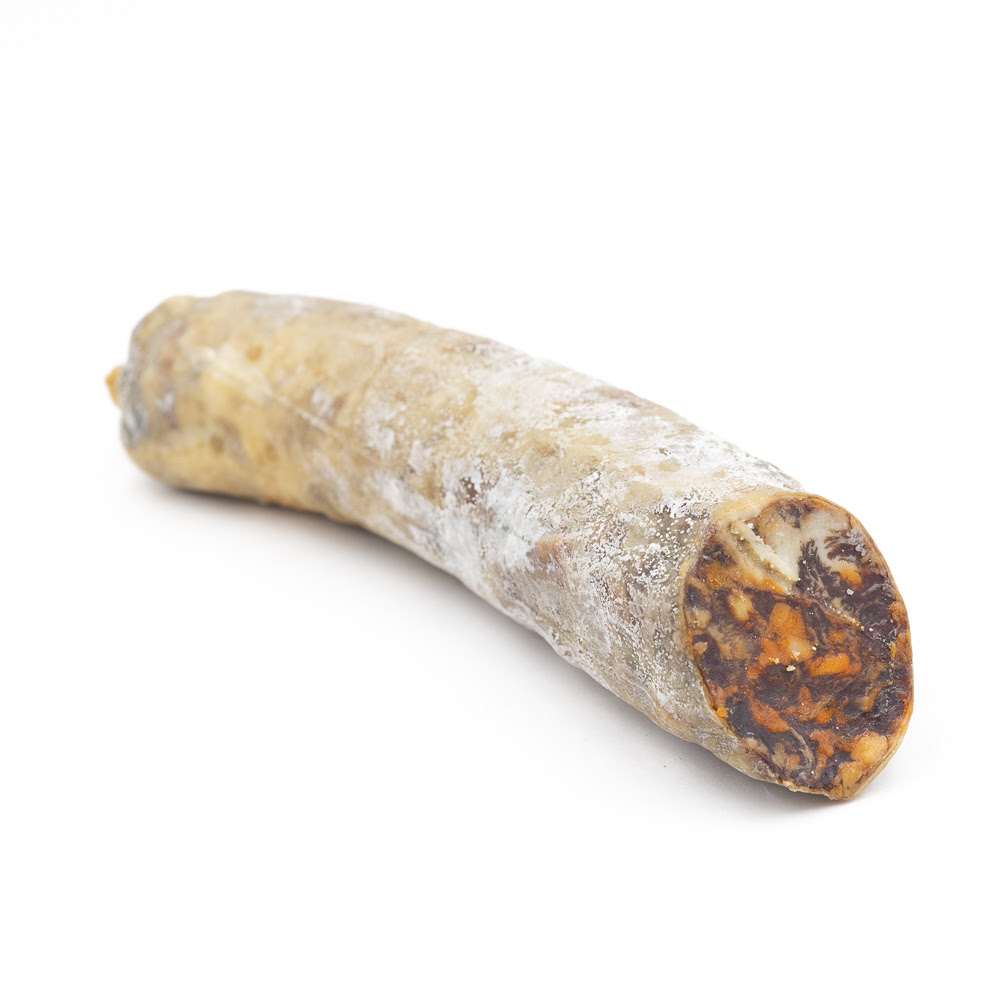 Thirteen years ago, I wrote in Zingerman’s News:

A year ago, December, we had the delicious pleasure of being able to slice and sell some of the first Spanish Iberico ham to be cleared for sale in the US. After waiting for … I think my entire two decade-plus culinary career to get to this permission point, it was a very exciting event, and, as I’ve been saying, pretty darned excellent. … While I’m not prone to throwing around superlatives, it got my eyes wide open and elicited an unplanned “Wow!” that left me not wanting to put anything else in my mouth for fear of messing up the flavor.

Since that American premiere of what is probably the world’s premier pork, cured hams and sausages made from Iberico bellota (acorn-fed) have continued to come into the United States. In The New Spanish Table, Anya Von Bremzen wrote of Iberico bellota ham, it is “the pig’s proudest moment—a cured ham so luxurious and unique the Spanish venerate it as if it were a religious cult or a pleasure-inducing drug.”

The hogs that are raised for bellota ham or sausage like this spend their last 90 to 120 days grazing freely in the semi-managed, million-acre, old oak forests in Western Spain known as the dehesa. During that period, the pigs that qualify to get the bellota label eat an average of thirteen to twenty-two pounds of acorns a day! In the process, the pigs can pick up about two or three pounds a day in weight, until the end of the year, by which point they’re up to about four hundred pounds. The acorn diet alters both the fat and the flavor of the meat overall. The “regular” Iberico pork products are really good; but the bellota are beyond what most of us can conceive of. Until we taste it.

Of late, I’ve been loving the Iberico bellota chorizo — cured, paprika-spiced, pork “sausage”/salami. When you try it, you’ll find something that is super full flavored. It meets all three of the descriptors we put on our definition of full flavor at Zingerman’s—complex, nicely balanced, and with a lovely long finish. There’s something, as per what I put above, about the Iberico bellota pork that is almost otherworldly. It’s like … cured sausage on psychedelics, or like listening to live music from the third row instead of listening to something off your phone with low quality headphones. I’m not exaggerating to say it has expanded my understanding of just how good cured pork can be.

What do you do with chorizo this good? Eat up! A few small slivers are enough to brighten my day. Chorizo is the original tapa—centuries ago, slices of it were used to cover glasses of sherry wine to keep the flies out. The Iberico bellota chorizo is great in paella or rice dishes. When you sauté it a bit first, some of that super flavorful fat comes out in the pan. It makes an excellent Spanish version of salami and eggs. And I used it instead of bacon to make a chorizo, lettuce, and tomato sandwich. Really good in bean dishes, or added to the sauté you do to start a summer tomato soup. You can also stuff a small bit inside some amazing Rancho Meladuco dates and sauté them like that, or gild the pork lily by wrapping the chorizo-stuffed date in bacon and frying the whole thing that way.

> PICK UP SOME CHORIZO AT THE DELI!