A rare olive varietal and some really fine flavor 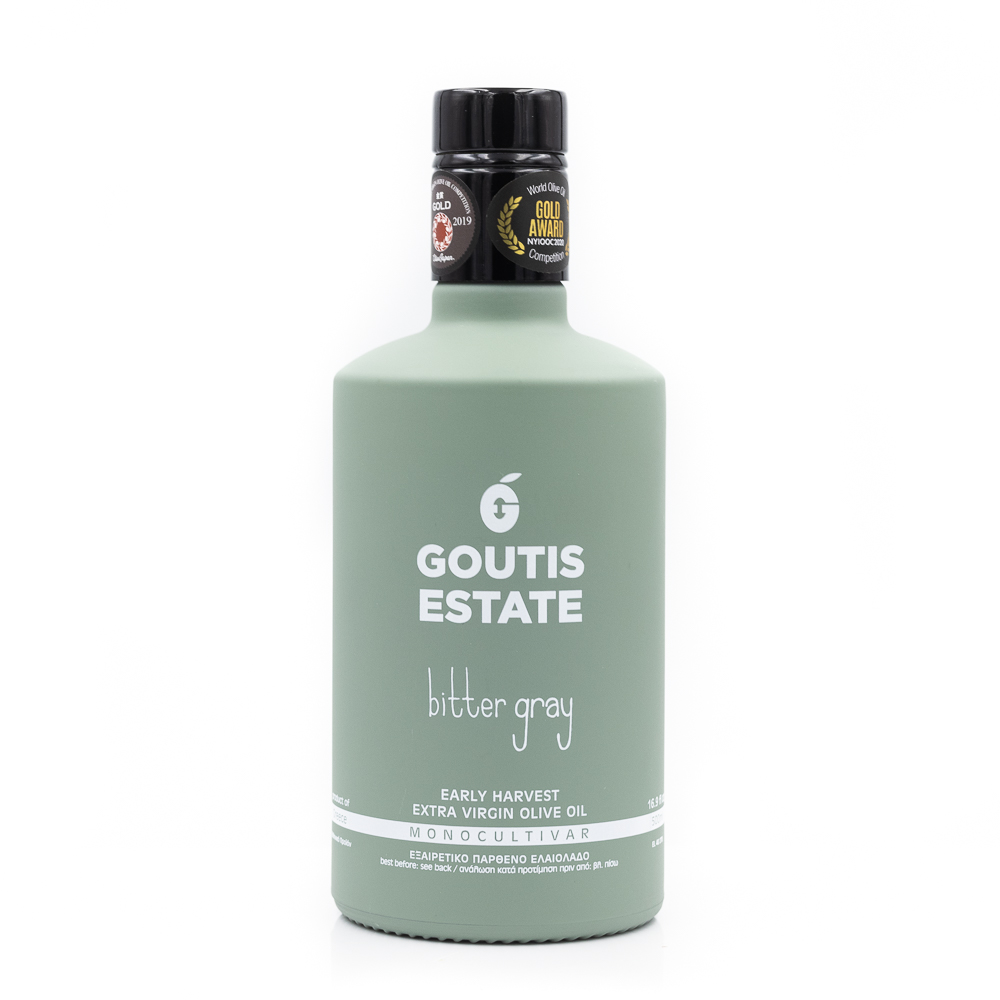 One of the most delectable, exceptional new olive oils to arrive at the Deli in a long while. The Goutis “Bitter Gray” oil is truly something special. Having just tasted a bit more of it on toast to prepare myself to do this piece, I’m smiling right now as I write. The flavor is awesome, attention-getting. Lots and lots of lovely high notes. Spicy, but more in a white pepper kind of way (as opposed to the more grounded gruffer black pepper of the Tuscan oils that I love so much, or the flowerier, more rounded fruit of some oils from other parts of the Mediterranean). It’s got a wondrous finish and it lingers lovingly on the tongue for a long time. There’s a bit of bitterness, but only in the most positive way. I think the folks at Goutis say it well: “This oil demands trained palates to relish the strong bitter taste of it, but one that rewards the daring in a unique way.”

While the oil in this format is new to the world, the trees were planted by the Goutis family in the land around Olympia over a century ago. (Olympia is, as you might expect from the name, the place where the Olympic games were started in 776 BC. Olive oil was one of the most valued prizes given to winners of the competitions.) The region of Ilia, in which Olympia is found, is on the western end of the Peloponnesian Peninsula, and although I haven’t been, it’s a highly recommended spot in which to do hiking and river traveling. The Goutis lands are near the village of Kallithea, which translates into “beautiful view.” There is a wealth of beaches nearby, as well as the magnificently dense, dark oak forest in Foloi (named for Folos, Hercules’ friend, who happened to be a centaur), which is a completely different ecosystem than one would likely imagine when thinking of Greece. The family spent nearly a decade preparing the oil to be sold, working with consultants from around Europe to get their processes for picking and pressing as close to mastery as they could.

The new-on-the-market oil won an array of awards in each of the last few years in London, Berlin, Tokyo, and New York just to name a few. It’s got a host of certifications that speak to the organic methods used to make it and verify that all of the olives used are grown on site (many less costly olive oils are merely bottled in the place that’s listed on the label, while the olives themselves are grown all over the Mediterranean). The oil is made with a local varietal by the name of Nemoutiana Horiatiki—as with all produce there are hundreds of varieties, typical of particular regions. Each varietal has its own flavor and character, and its distinctiveness is a big part of what makes the Goutis oil so good. The “Bitter Gray” bottle is beautiful as well—opaque (to protect the olive oil from the damage of light) gray-green ceramic—so keep it in mind if you need a good gift.

The Goutis “Bitter Gray” oil is great on toast. Terrific too on the fine feta we have from Mt. Vikos at the Deli. It’s unexpectedly excellent on fresh fruit—try the oil drizzled over sliced ripe peaches when they come on the market soon along with a bit of black pepper or chopped green jalapeno. Really fine on fresh fish or seafood. Super good on a simple salad of local lettuces with little more than a bit of fleur de sel, fresh ground black pepper and a squeeze of lemon. Great on sautéed summer squash or spinach. It would be wonderful with this watermelon salad as well.

> STOP BY THE DELI FOR A TASTE!