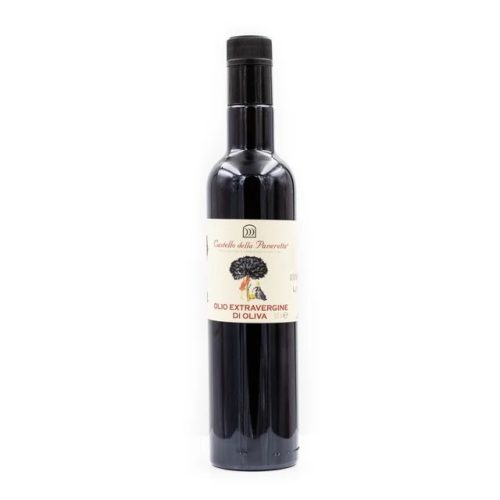 I visited Castello di Paneretta for the first time nearly 30 years ago. Back in an era when fax machines were the height of technological efficiency and international phone rates were uncomfortably expensive, working out the details of bringing it to Ann Arbor was more than a bit daunting. In fact, I think it took us a couple of years to arrange to get the oil here. We’ve now been getting the Paneretta oil every year since, and throughout those three decades it has stayed, consistently, one of our highest quality oils.

Located about an hour south of Florence, roughly halfway along the road to Sienna in the Chianti Classico wine region, the centerpiece of the old estate is the castle, which is now nearly 1000 years old. Over the centuries, the castle became a popular stop-off point for creatives—the 16th century poet Girolamo Muzio dedicated a poem to the castle! Here in the 21st century, the wines of Castello di Paneretta are highly regarded and, if you want to follow in the footsteps of the Renaissance poets, they have a noteworthy agriturismo on the property as well. Here at Zingerman’s though, it’s the estate’s olive oil that gets the attention. The Paneretta oil is made from the typical Tuscan trio of varietals—Moraiolo, Leccino, and Frantoio. The harvesting on the 60 acres of olive trees is done early in the fall to keep the oil green and fruity and high in antioxidants.

The 2021 harvest is modestly peppery with an exquisite aroma. Brad Hedeman, the longtime marketing manager at Mail Order, says the Paneretta oil is “So thick it pours from the bottle like cream, so delicious I find myself thinking of more dishes to use it with.” The crew at the Deli describes its flavor as “almond and nectarine” with an “impressive bitter green and arugula flavor, and a spicy red pepper heat on the finish.” I’m personally a bit bewitched by the bitterness—it’s gentle but persistent. The new 2021 harvest is particularly terrific poured on toast (in Tuscany it would be known as fettunta, elsewhere in Italy, bruschetta—the “ch” is pronounced as a “k”). Great on beans and poured onto steak. Really nice for a salad of radicchio or escarole, and on the spring greens from the Farmers Market.