A hand-cut piece of world-class charcuterie from Minneapolis 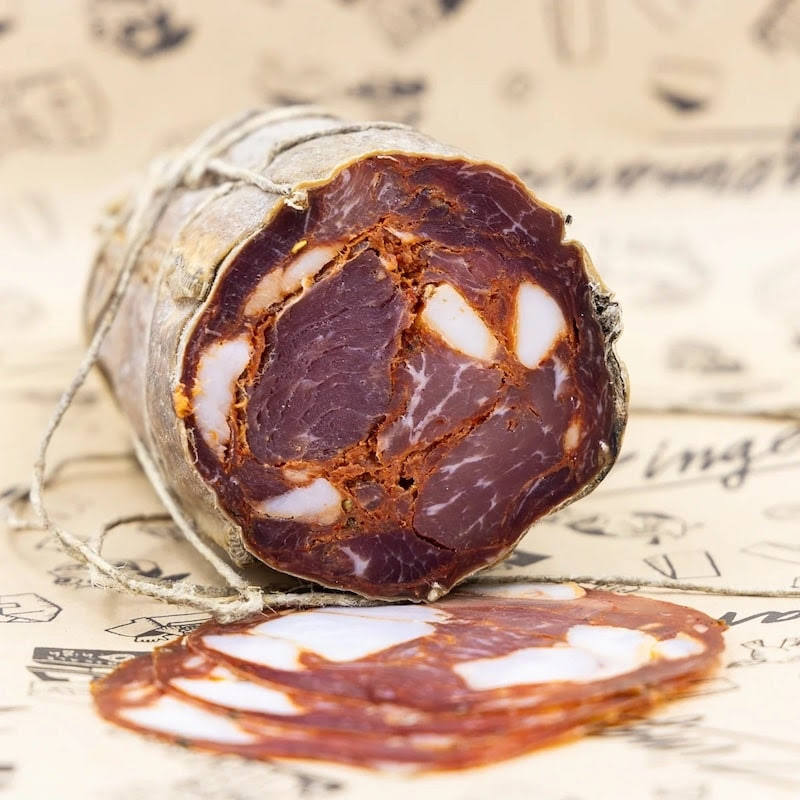 Mike Phillips has been around artisan pork for much of his life. He studied the making of salumi and cured pork with Francois Vecchio, the amazing elder statesman of charcuterie in the U.S. I’ve been learning from Francois for over thirty years now; the fact that Phillips brought Francois in as one his teachers was pretty much a guarantee of the small artisan firm’s good work. In 2014, Phillips founded Red Table Meat Co. in Minneapolis to craft artisan salumi and cured pork products.

The Gentle Giant salami is one of Red Table’s newer offerings, and Connor Valone at the Deli is already a huge fan. Connor has a great palate and his passion for good food has helped make him an integral part of the Deli’s team over the last few years. The week before last, he emailed to share his enthusiasm for this newly-arrived salami:

Red Table head honcho Mike Phillips teamed up with his long-time friend, neighbor and former coworker, Greg Reynolds, of Delano, Minnesota, who has been growing traditional Hungarian peppers for paprika. Red Table takes those peppers and mixes them with coarsely hand-cut Berkshire and Red Wattle pork meat and fat, and stuffs it (without grinding!) into a beef bung casing before it cures into a beautiful large format young salami. The taste is exquisite, and unlike anything else we have in our case right now. The peppers build from a bright late-summer bell pepper perfume into moderate heat, melding harmoniously with the generous and delicate fat chunks. As always, we preach Mike’s gospel of cutting his salumi into chunks and enjoying it in bite sized pieces as opposed to thin slices, but either way, the Gentle Giant is tasting damn fine. When the staff tasted and scored the Gentle Giant, everyone gave it a 10. And we can’t remember the last time that any product has received nothing but 10’s!

Connor included some of the team’s tasting notes:

The Gentle Giant is great on a charcuterie board, for sandwiches, and paired with cheese. As Mike and Connor do, I prefer it cut into thicker pieces, the better chance to chew and appreciate the fullness of the flavor. Like everything from Red Table, the quality of the pork is what comes through, along with subtle supportive flavors of the spices (cheap salamis taste mostly of garlic, but very little of the actual meat). I like the Gentle Giant a lot in scrambled eggs—simply add the cubes of the salami to the eggs while they’re cooking, so it can hold onto its texture and its fat. Add small cubes of Gentle Giant to pasta, green salads, or rice dishes. It’s a wonderful new arrival!

> GET SOME GENTLE GIANT!