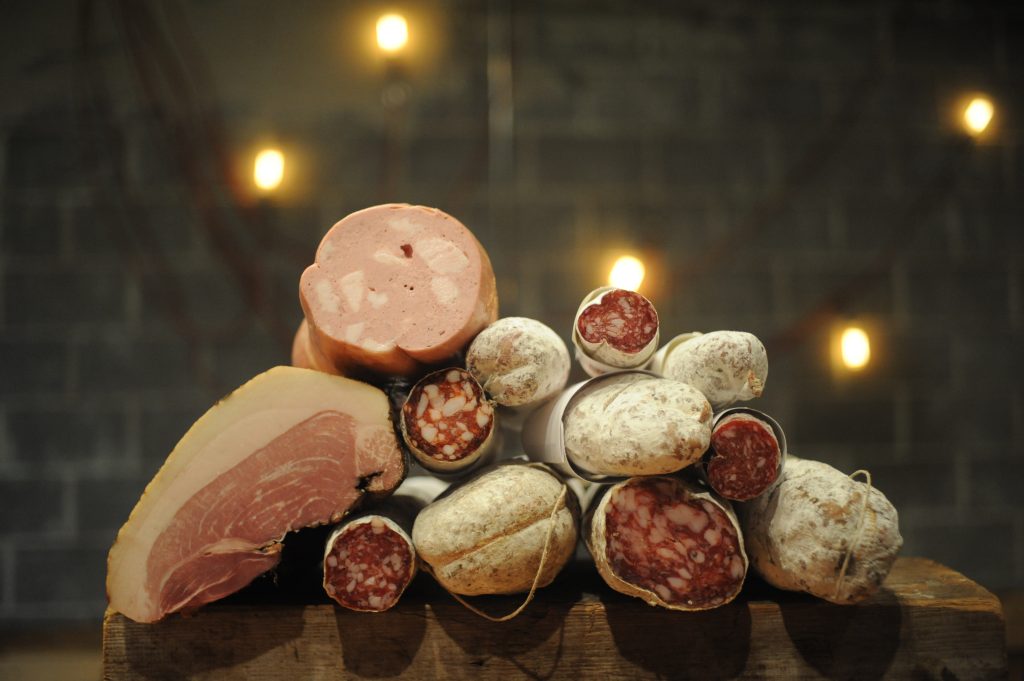 Mike Phillips likes to say he’s been working on forming Red Table Meat Co. for his whole life. Growing up in a small, rural farming community, he worked for farmers and saw their struggles and tireless labor firsthand. That powerful sense of community never left him, and now, Red Table Meat Co. couples those values with well-made, thoughtfully-crafted products.

Based in Minneapolis, Mike sources heritage breed pork (a mix of Red Wattle, Berkshire, Gloucester Old Spots, Tamworth, Large Blacks, and Duroc breed pigs) raised on six nearby farms in Minnesota and Iowa. The pigs live their lives indoors or outdoors as they please, rooting around in the grass and dirt, and only receive antibiotics if they’re sick. Once the whole hogs arrive at Red Table’s butcher shop, they cure the pork and create some exceptional salumi.

Getting hungry? We’ve got the cure(d meats) 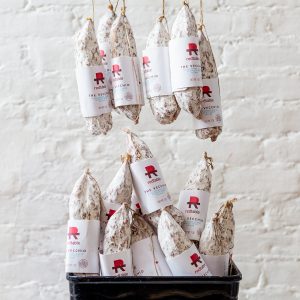 This Saucisson Sec-style salami is small in stature but is big in porky flavor, and gently supported by black pepper, garlic, and white wine. Add slices to a sandwich or pizza, or dice it and toss them into a salad. Definitely a a favorite of our meat mongers at our Deli counter!

> SHOP THE VECCHIO ONLINE AT THE DELI

The newest seasonal salami from Red Table Meats is composed of hand-cut Berkshire and Red Wattle pork, and mixed together with locally grown Hungarian Paprika peppers. The silky pork fat and fresh paprika spice is not to be missed- get it while the getting is good!

A Good Food Award-winner, this hot Finocchiona-style salami packs a red and black pepper wallop and rounds it out with a healthy but well-balanced pop of fennel. It’s a classic and balanced salami; enjoy slices on a baguette or a charcuterie board (and don’t let the hard ends go to waste—add them to a ratatouille or giardiniera!).

A genoa-style salami lightly flavored of white wine, white pepper, and garlic and aged for 3 months. The subtle seasonings allow the high quality of the meat to shine through; try it sliced and added to a salad, sandwich, or charcuterie board.

Given that Mike once dated the Clay County Pork Queen, we’re guessing this crespone-style salami might be named in her honor. A funky little number for those who prefer the pork flavor to reign supreme; it’s seasoned gently with black pepper and garlic and aged for about 6 weeks. Try this with fresh fruit and cheese—particularly an aged cow’s milk cheese such as Ogleshield or Almnas Tegel.

Salami get this straight…

What’s the difference between salumi and salami? Salumi describes all dry-cured pork products; salami is a specific kind of product made from ground pork.

Creating a better food system, one salami at a time

“Mike Phillips has been fighting in this corner of the food world for a long time, and these days Red Table is his weapon of choice. What he’s fighting against, in the broadest terms, is commodification. All those little cut corners. All those little concessions to price and speed that leave us with watery meat covered up by too much salt and spice, with animals moved so quickly through the system that waste and cruelty become inherent, with the human cogs in this great machine asked to do a little too much work, at a little too much personal risk, for a little too little money.” —Steve Hoffman for The Growler