A Zingerman’s classic in the making 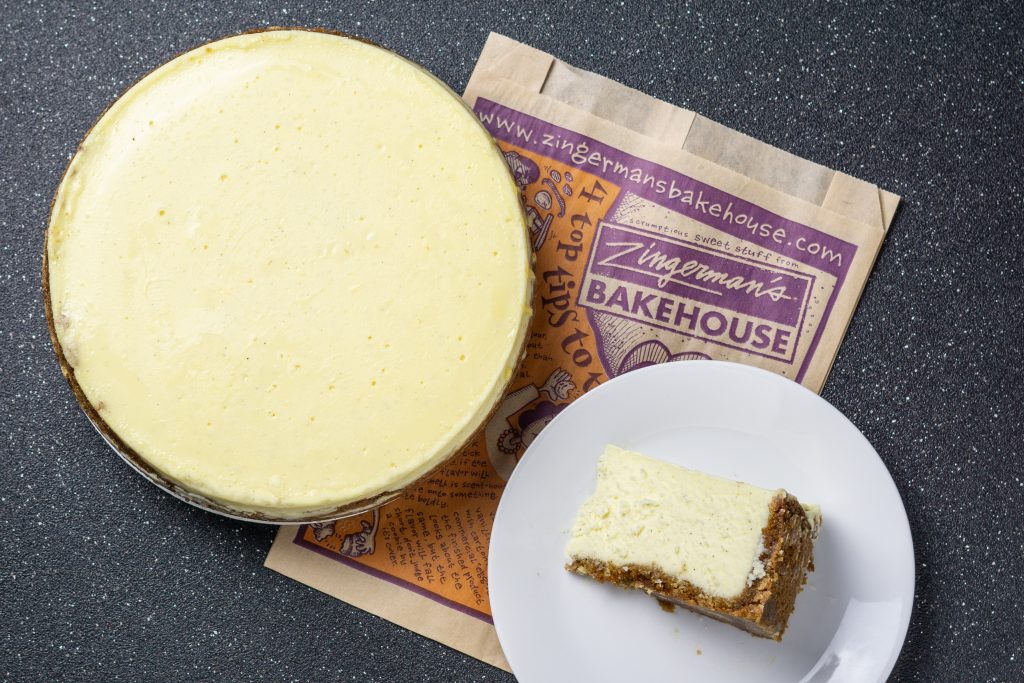 This classic cheesecake from the Bakehouse has earned its spot on my “classics in the making” list. It is so, so, so good. We have been quietly making it for nearly twenty years now. For whatever reasons I can’t really explain, it’s never been a product that we’ve done a lot to promote. But having just retasted it again, I’m reminded anew of just how amazing it is! Creamy from the Creamery cream cheese, the poetic perfume of the vanilla, the fantastic Bakehouse graham cracker crust. So luscious! There are, I know, a number of very famous cheesecake makers in this country, but I believe the Bakehouse’s is one of the best!

Cheesecake has been made in one form or another for thousands of years. In its most basic construct, it’s a baked “cheese custard.” Ancient Greeks made flat cheesecakes as long ago as 2000 BC by mixing fresh cheese with honey and flour, then baking them on stone griddles. There’s some evidence that they were served at the early Olympic games. Later, in medieval Europe, cheesecakes were made with a pastry crust. Its American advancement happened in the late 19th and early 20th centuries. American cream cheese was invented in 1872 in the town of Chester, New York by one William Lawrence. By the end of the 19th century, cheesecake had gained great popularity in the States. It became particularly popular in the Jewish immigrant community, so it’s not unlikely that Emma Goldman—well known for her cheese blintzes—might well have baked or at least eaten some during her years living on the Lower East Side in New York City.

One hundred twenty years after Mr. Lawrence made his mark on the dairy world, we started making similar, artisan cream cheese at the Creamery. Which then became the base of the Bakehouse’s incredible cheesecake. It’s remarkably tasty cold right out of the fridge, but I like it better still if I allow it (like all good cheese) to come to room temperature first. The Bakehouse cheesecake is a great match for the new season’s blueberries or cherries that are on the market, or you can serve it topped with some of your favorite jam (like American Spoon Apricot) or one of the many artisan honeys we have on hand. It’s also impressively good with freshly ground black pepper or even a little olive oil (the delicious but relatively light Goutis olive oil from Greece would be great). In the spirit of finding joy, I will say that even a single bite of this choice cheesecake does that for me! Marvelous, maybe even magical. If you’re looking for another way to celebrate, July 30 is National Cheesecake Day. Pick up a couple of pieces, or even a couple of cakes and make a toast to good—and tasty—things to come!

> PICK UP A CHEESECAKE AT THE DELI!