Celebrating two decades since the return of handmade cream cheese 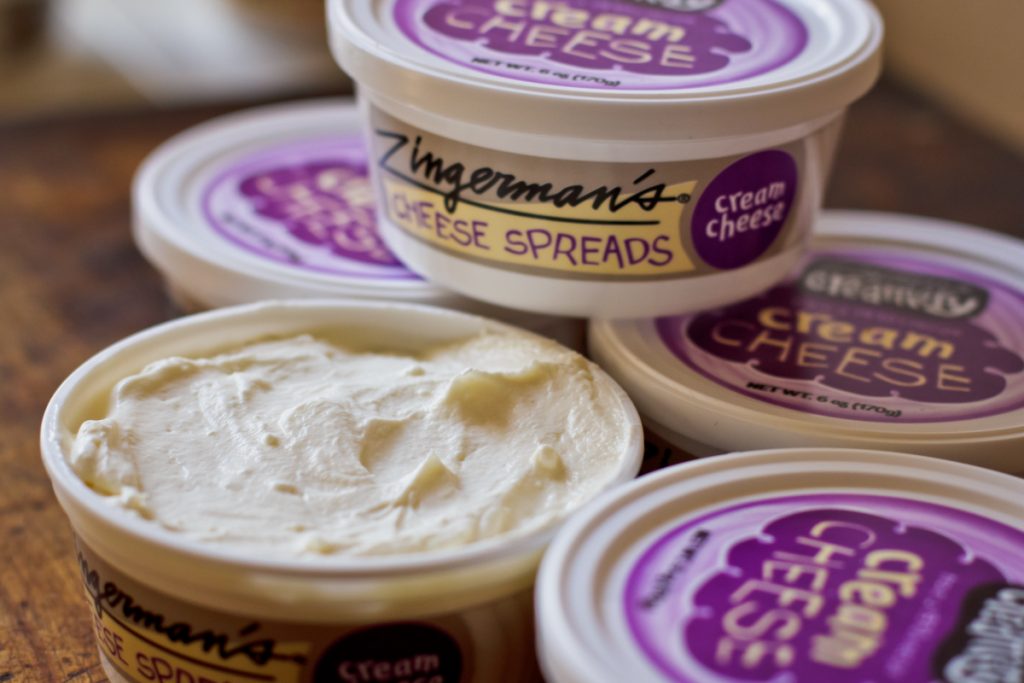 As part of the two-day ZingTrain Managing Ourselves seminar, we do a 45-minute session of comparative tasting. A Zingerman’s product and then a “comparable” commercial one, side by side. The idea is to help enhance mindfulness and awareness of otherwise ignored details in support of the belief that we’ve held since day one in 1982—that you really can taste the difference! This time around we tasted Zzang® candy bars from Zingerman’s Candy Manufactory, baguettes from Zingerman’s Bakehouse, coffee from Zingerman’s Coffee Company and Cream Cheese from Zingerman’s Creamery. The difference between the artisan and the commercial, mass-market offering, in all four instances, was massive. But the one that almost all the attendees remarked on most was the cream cheese. They were shocked by the difference. I can see why! Even though I’ve loved what we make for 20 years now, I still forget just how much of a difference there is. Once you get used to the real thing—cream cheese the way it was made 150 years ago—it’s hard to go back to the industrial. I wrote about it in America: The Cookbook, Gabrielle Langholz’s lovely and very large compilation about the wonders of American food.

Cream cheese was the first product we made at Zingerman’s Creamery!

When we were having initial discussions, it dawned on me that although at the time (the late 90s) we’d made major improvements to so many of the core ingredients we used every day at the Deli, we were still using the same commercial cream cheese that we’d had since we opened in 1982. In fact, it was basically a slightly better version of the same thing I’d grown up with from the supermarket. The more I thought about it, the incongruity started to really kill me. And that’s how Zingerman’s Traditional Cream Cheese came to be.

Recipes for cream cheese can be found in U.S. cookbooks and newspapers beginning in the mid-18th century. Cream cheese was produced on family farms throughout the country, so quantities made and distributed were typically small. The production process of traditional cream cheese the way we do it at the Creamery is pretty simple. Newly arrived milk is gently pasteurized, then poured into a cheese vat where rennet and active cultures are added to begin flavor development and set up the curd. After a few hours, the newly formed, soft-textured curd is hand-cut with stainless steel knives, then hand-ladled into cloth bags where gravity drains off excess moisture for six or seven hours. After draining, some sea salt and cream are added and carefully mixed into the soft curd.

Twenty years after its emergence from the vats at the Creamery, kids are growing up eating handmade cream cheese from Ann Arbor, Michigan!

What do you do with this super delicious old-school cheese? Obviously, you can put it on Zingerman’s Bakehouse’s terrific bagels. On Tuesdays and Saturdays, you can put it on a bialy, too! Put it on sandwiches or fold it into an omelet. Really great on the Bakehouse Jewish rye or equally so on the Roadhouse bread. It’s wonderful at parties topped with jam, marmalade, or honey. Bake with it. Eat it with a spoon. Put it on Irish Brown Soda bread. It’s all good! If you’re feeling like having some fun you can make the 1950s classic, “ants on a log”—celery sticks stuffed with cream cheese and topped with raisins.