One of my favorite Jewish comfort foods! 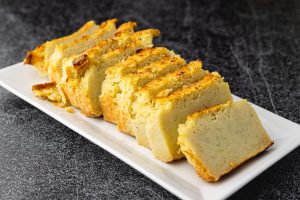 The Deli has a whole range of Passover foods on the menu for the Passover holiday—roast brisket, chicken, matzo ball soup, gefilte fish, charoset, horseradish, and much more. The menu also includes holiday treats from Zingerman’s Bakehouse–Chocolate Orange Torte, Macaroons, Sponge Cake, and Nina’s ’Nolis (pine nut cookies). Of all these great foods though, I think my personal favorite is still, 40 years into the story of Zingerman’s, Potato Kugel. While it will get only a bit of attention in the holiday headlines, it’s always the first thing I order for our house!

While it is very true that I grew up primarily on suburban supermarket foods like Kraft Macaroni and Cheese, fish sticks, hot dogs, and baked beans, it’s also true that almost every Friday night until I left to go to school in Ann Arbor, my grandmother would come over and cook for us what everyone in the family called “Friday night dinner.” She cooked the same meal pretty much every Shabbos: chopped liver, chicken soup, roast chicken, a cooked vegetable, and potato kugel. The latter is certainly one of my all-time favorite foods. Not to be confused with noodle kugel (which is also good, but a very different dish), potato kugel is basically just grated potato and onion with a little bit of egg to help hold it together, some salt and pepper to spice, and a touch of fat to add a little richness.

Potato kugel’s popularity among Jews in the U.S. is a legacy of Eastern and Central Europe; Jews from Germany, Poland, Ukraine, Belarus, etc. would all have eaten potatoes regularly, which means that kugel was likely, as it was in our house when I was a kid, one of the ultimate comfort foods. If you’re putting on a Passover Seder, the kugel is a super side dish, but you don’t need to celebrate the holiday to enjoy it!