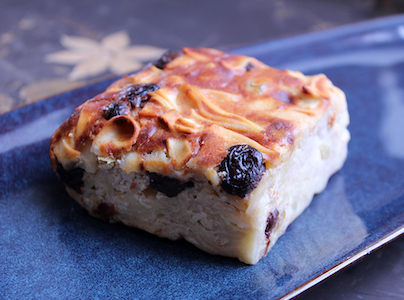 This is one of the recipes that we got from my grandmother way back in ’82 when we opened. If somehow you’re not familiar with it, it’s made with delicate Al Dente egg noodles (made first by Monique and Denny Deschaine at Al Dente who started their business here in town a few years before we opened the Deli), which we toss with fresh eggs, real vanilla, juicy Red Flame raisins, and handmade Farm Cheese from the Creamery, then bake the whole thing ’til the top turns golden brown. It was delicious then, and it’s equally as delicious now. As Joan Nathan writes, “For many American Jews, kugel is the taste of childhood.”

It seems likely that noodles arrived in Eastern European Jewish communities both from Italy (probably via Germany) and also from the East, coming from Central Asia. The first published recipe for kugel in the U.S. was in Esther Levy’s 1871 Jewish Cookery Book, which is a mixture of homemade noodles, raisins, and sugar, bound with eggs. There are also savory versions. And, although it never happened in my family (I think it would have been considered heresy), many American Jews started to add industrial ingredients like canned fruit cocktail or Corn Flakes (we ate both at our house—just not in our noodle kugel).

Noodle kugel is one of the more versatile of traditional Jewish foods. It’s great any time you’d like something to eat—for breakfast, in a bag lunch, or as an afternoon snack as well. Follow our recipe and make it at home or add a few slices to your next Deli order.  If you like, you can buy a whole kugel shipped to your door to heat up at home. It’s really good with a spoonful of good jam on the side!