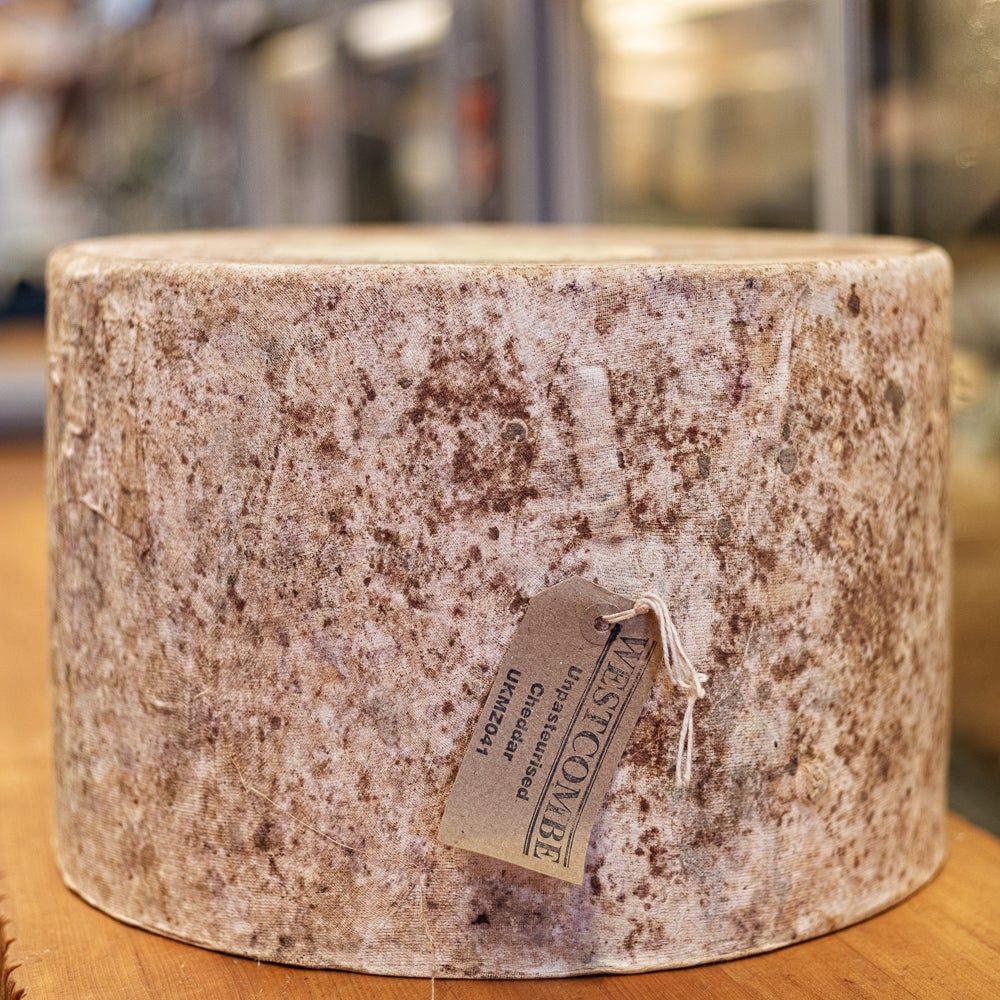 George Orwell once said that February “Is a particularly detestable month with no virtue except its shortness.” Nibbling on this cheese over the last week has helped me find a bit of culinary brightness, and made Orwell’s sadly sort of true statement (at least for many of us who live in cold northern Hemisphere climates) a little less relatable. The current wheels of Westcombe Farmhouse Cheddar are truly fantastic—one of the best new cheese arrivals in the ZCoB!

Back 40 years ago when we were getting ready to open the Deli, the only place I could find English farmhouse cheddar was in a book. Even in England back then it would have been hard to source other than in the very best shops like the late Major Patrick Rance’s Wells Stores in the small English village of Streatley-on-Thames. In the mid-80s we finally started getting the real thing—cloth-wrapped, naturally-aged, 60-pound wheels of farmhouse cheddar from the Quicke family in Devon. In the early 90s I met Randolph Hodgson and Jane Scotter from Neal’s Yard Dairy; within a few years they listened to our pleas to start exporting the full flavored, traditional cheeses they were buying and maturing, which gave us, finally, a steady source of super tasty traditional cheddar. For the first 20 years that we bought from them, there were two great choices: Montgomery’s and Keen’s. Around 2010 a third option, the Neal’s Yard folks let us know, would be coming soon. Like all great work, it took a lot of determination, attention to detail, and continual steady commitment to improvement by the Calver family at Westcombe to make the cheese into the marvelous wheels we have on hand at the Deli. A dozen years later, Westcombe Cheddar consistently stands at the top of the quality scale.

While the Westcombe Cheddar is new in our context, cheddar making on Westcombe farm was happening back in the 1890s. In the years when the young Brenda Ueland was growing up in Minneapolis, another creative, hardworking, independent woman, Edith Canon, was making some of the most highly regarded cheddar in England. Like nearly every dairy in England, in the years after WWII, Westcombe moved to making the now much, much more common “block cheddar.” Easier to produce, plastic- (instead of cloth-) wrapped, its lower cost, longer shelf life, and diminished day-to-day variability, made for a short-term economic boon. Over time, the cheese sold for ever lower prices in supermarkets; in the process, old traditions were eroding ever more quickly. Cheese quality was dropping by the day, and the handmade farmhouse cheeses that had once been commonplace in the countryside of Somerset became almost impossible to find. This is the work that Major Patrick Rance wrote about in his classic voice in the dairy wilderness The Great British Cheese Book. The book came out the same year we opened the Deli, in 1982, and it opened the intellectual door to what British cheese was supposed to be. Asked to comment on supermarket cheese, Rance wrote, “The first results, a few years ago, were cheap and nasty. Now they are still nasty but no longer cheap.” The block cheddar made in factories? The Major derisively referred to it as “mousetrap fodder.”

All this started to turn around at about the same time we were opening the Deli over here. Richard Calver, one of the farmers supplying milk to Westcombe Dairy back in the day, became active in the cheese business in the 1960s. Twenty years or so later, Richard and his partners decided to turn away from modern industrial cheddar Patrick Rance had railed against, and they returned to making the kind of cloth-bound wheels that had made the farm famous in its region back in the 1890s. That work took a great leap forward in 2008 when Richard’s son, Tom—having worked as a chef, as well as interned with Neal’s Yard—went back to the farm to take over cheese production. He guided the dairy back towards an old-school artisan approach, away from most of the modern “improvements” that had been introduced over the course of the 20th century. Tom’s efforts have, over a 10-year period, paid off terrifically!

When I nibble at the Westcombe Cheddar, I think back to Patrick Rance, a lone voice in an industrial wilderness, whose passion, vision, determination, and relentless evangelism for the cause has, half a century later, made the moment possible. We are the fortunate beneficiaries of his efforts, of the hard work of Randolph, Jason (Zingerman’s alum), David Lockwood, and everyone at Neal’s Yard Dairy in London and of the Calvert family.

This current batch of Westcombe Cheddar is the best we’ve ever had. Buttery, nutty, full, perfectly salted, and elegantly earthy. It’s everything I’d want in an old school English cheddar. Terrific with the red walnuts I really love at the Deli. It’s great with the delicious Medjool dates we get from Rancho Meladuco in California, and delightful with a good crisp apple, or with a slice of apple pie. I want to try some with a sip of the Roho Joe Coffee Stout we have at the Roadhouse from Mothfire Brewing. The Westcombe Cheddar is really something special, a cheese that I’m pretty sure Patrick Rance would have appreciated. It’s a cheese that would make him feel good knowing that his hard work in the wilderness of the industrial food world has, 40 years later, paid off so that you and I can experience what he wistfully wrote about back in 1982:

Our most generous original gift to humanity, Cheddar, is really known to comparatively few people. [and further] I can still remember my mid-morning treat on sunny days in the 1920’s as I played in the east end vicarage garden of my early childhood. Through the kitchen window a fond hand would reach out bearing a buttery crust crowned with hunks of nutty-flavored cheddar.