A Benefit of Whole Animal Butchering

Each of our Butcher’s Monthly boxes comes with either beef tallow or pork lard, and one of the most common questions we get from our guests is “What should I do with all this fat?”  My reply is simple: What don’t I do with the fat??

Before I answer what to do with the fat, let me explain why the fat is included in each share box.  Our partners at Marrow are a whole-animal butcher.  They work with local farmers to receive whole, slaughtered animals to break down, trim, and prepare cuts based on seasonal and custom demand for both their own restaurant and butcher shop. Butchering whole animals has its pros and cons, as well as its byproducts: skin, bones, and fat. Many butchers choose to receive quarters or primal cuts from processors to cut down on potentially stockpiling these byproducts, which they may consider waste. Whole animal butchering allows the purveyor to reap the rewards of “byproducts” by selling the fat, skin, and bones, or making products from them in-house, and ultimately giving them the opportunity to connect with their customers by educating them about how to best use the products. 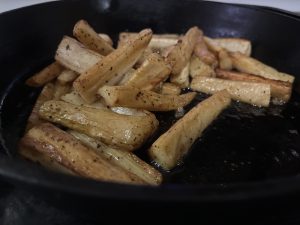 Tallow is rendered (melted in order to separate out the impurities like water and protein) from the hard fat of the animal. Also known as suet, this fat, which is the fat that protects and surrounds the animal’s organs, is the best fat for cooking. Because there is almost no water or protein sediment left in the fat once it’s strain it, the fat has a higher smoke point than other fats.

I roast almost all of my veggies in tallow, gently basting root vegetables every five or so minutes while they roast off in a hot oven results in some seriously flavorful meals. A guest recently raved to me about the Jamaican beef patties she’d made with the dry-aged ground beef for the filling, and used the tallow for the crust, and after replicating her idea on a particularly cold afternoon, I was approaching ecstasy. Personally, I always keep a decent stash of tallow on my counter because it is shelf-stable, and I can reach for some whenever I need it. It’s easy to melt down and infuse with herbs for vegetable roasting or sauteeing greens. The most popular way to use tallow in both restaurants and home kitchens is to make some out-of-this-world french fries. I’ll put in a plug for making pie crust with the tallow in the same way you would use lard. 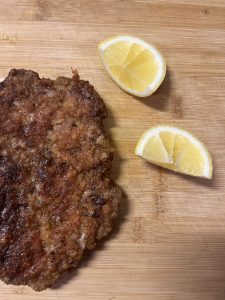 Specifically the soft fat from around the kidneys and loin of the pig, leaf lard is spreadable at room temperature and considered the highest grade of lard. Because of its high smoking point (meaning it can get hot without scorching), it’s great for frying, pan-searing, and even grilling. It doesn’t have porky flavor so it’s perfect when you don’t want the final product to taste like pork (think donuts). Leaf lard is particularly prized by bakers for making flavorful and flaky pie crusts.

When I first got my hands on the lard from Marrow, I followed the recipe from butcher Nick to make pie crust, which really outdid itself, resulting in an extraordinarily flaky and rich crust. Really though, I like to use lard in place of any cooking fat I’d otherwise use when cooking pieces of meat, especially pork and chicken. It incorporates very well into pastry dough such as pie crust or biscuits as an easy substitution for butter or margarine, and usually yields a flakier result. The truth of the matter is that rendered lard is a healthier substitution for butter, vegetable, or coconut oil, containing zero trans fats, and less saturated fat than butter or coconut oil! It just plain tastes better, too.

Try incorporating some lard or tallow into any savory dinner you make this week! It’s easy, it doesn’t spoil quickly, and you can really taste the difference.

If you are reading this post and curious to try some tallow or lard, get one of our Butcher’s Monthly boxes and start cooking!