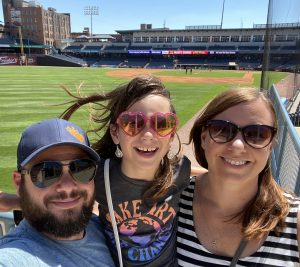 Bryan grew up in the Chicago area, before moving to California where he earned his bachelor’s degree at the University of California, Berkeley in Political Science and Economics. While out west, he met his wife Julie, a Michigander, and they had a baby (that baby is now a sassy 9-year-old!). When the Weiss family headed back to Michigan to be closer to family, a former colleague of Bryan’s had been a cheesemonger at Zingerman’s, so he connected Bryan to the Deli, and the rest is history—he’s been with us now for 9 years. He’s an avid mountain biker and a musician—he’s a drummer in an alt-country band.

As an Event Manager, Bryan is part of a team that creates events and experiences for guests. And it’s immediately apparent that he loves what he does:

“It is a very dynamic job and that’s my favorite part. I like when I have 20 staff in lockstep and we’re able to produce the guest’s vision while making it look easy and seamless. Our customer service, our quick response time, and our creativity to create an event under almost any budget sets us apart from other catering companies. Our food is approachable and delicious and I’m proud to serve it.”

Yes, his job does involve food and menu planning, but he also is busy with logistics, advising, planning, and staffing. He loves a good challenge and working through them with creative solutions. He shared that no matter how much you plan, every event is different, and sometimes the unexpected comes up—like a 50 mph wind gust that blows a tent out of its stakes! Luckily, Bryan likes to think on his feet, and prides himself on being nimble, flexible, and able to roll with the punches, so the show always goes on!

And sometimes the event truly is a show. Bryan has seen a lot of interesting places, but one of the ones that really stands out was catering an event following a weekend of fasting at a sweat lodge on the northern coast of California. The ride alone was an adventure—it took over two hours on a freeway followed by another hour of driving through rugged terrain to get to the site. Once there, the view opened up to a breathtaking view of the Pacific Ocean… along with an, ahem, expansive view of the nudist guests.

Closer to home, one of his favorite local event venues is the Greyline, calling it a “swanky and versatile venue with a blank canvas that guests can make their own.” He’s enjoyed seeing the different ways guests have transformed the space, from decorated bicycle wheels hanging from the ceiling to themed events like a Great Gatsby night. 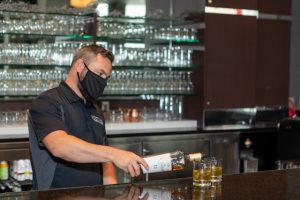 “Working for Zingerman’s as a catering server, bartender or captain is a great opportunity for most people who like to own their time and decide their own availability and schedules. There is a lot of camaraderie among the crew.”