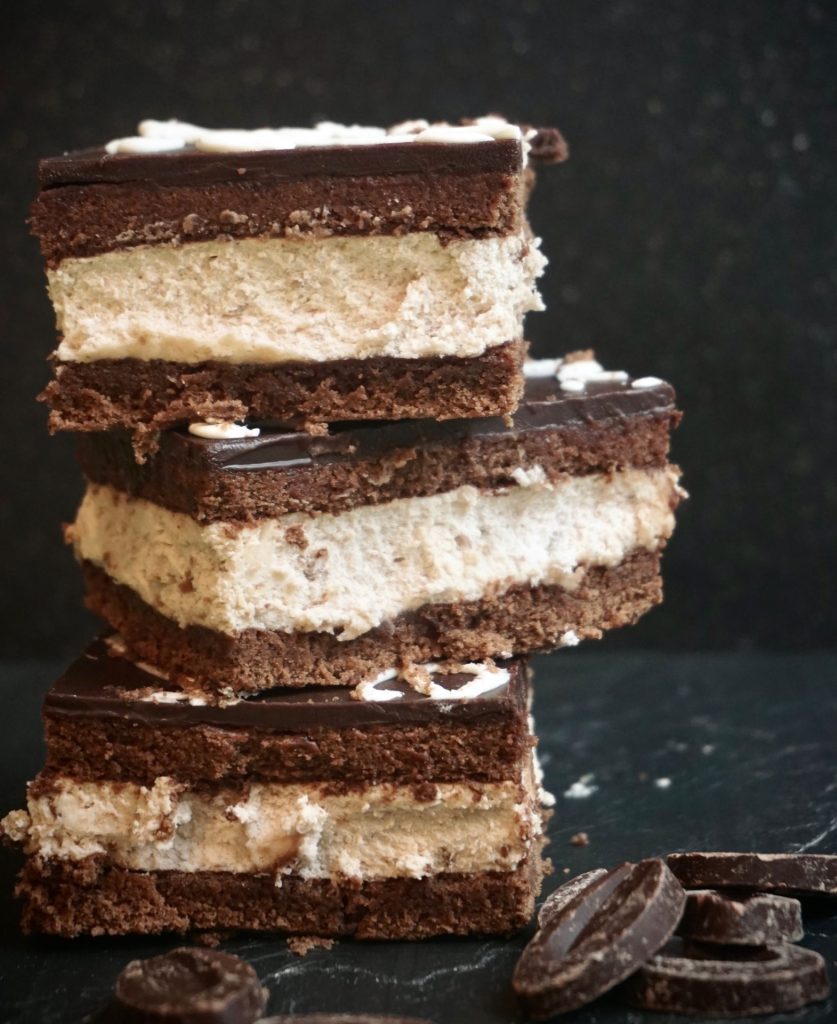 It’s been over a decade now since we first started making Rigó Jancsi at the Bakehouse. It’s one of the most elegant, and excellent, pieces of pastry we make, and it has a terrific story to go with it. Rigó Jancsi was a Roma musician who was a headline-grabbing sex symbol and musical performer in Europe in the late 19th century. He fell in love with Clara Ward, a Michigan-born American who boldly abandoned her Belgian-prince husband to run away with Jancsi. The cake was developed by a creative Budapest baker to take commercial advantage of the headlines that followed the scandal. The “regular” (if a cake this complex and amazing can be called “regular”) is a beautiful rectangular torte, covered in a thick coating of dark chocolate ganache, with the name—Rigó Jancsi (pronounced “ree-go yon-chee”)—written in script across the top. It’s typically two layers of really tender, delicate chocolate sponge cake, sandwiched around a modest layer of chocolate, rum-scented whipped cream, topped off with a very thin, delicate layer of apricot glaze and then, finally, finished with a thick dark chocolate ganache.

(Given the sad reality that the Roma people were and still are one of the most persecuted groups in Europe, the degree of drama and angst around the story was increased because it was a Roma man running away with a woman from a royal family. Ironically, in the context of the persecution the Roma have suffered, in the Roma language, the word “Roma” means “a person.”)

A couple times a year, the Bakehouse crafts a terrific variation on the traditional Rigó Jancsi. Chestnut flour—a staple ingredient in centuries past—is added to the cake mix, and the “filling” is made with a thick layer of chestnut cream. To my taste, it really is one of the most complex and lovely things we make. I don’t eat a whole lot of cake, but this one is too compelling to pass up. The crew at the Bakehouse describes it as:

Two light layers of chocolate chestnut sponge cake, filled with chestnut rum whipped cream, brushed with a thin layer of apricot glaze, and finished on top with rich dark chocolate ganache. Sweet chestnuts … are a staple in Hungarian food and desserts and happen to grow in abundance here in Michigan. We get our high-quality chestnut flour for the cake from Chestnut Growers Inc., a consortium of 32 Michigan chestnut growers, based in Grand Haven, MI.

The rum in the whipped cream is meaningfully present but remains, supportively, in the background. The chestnut cream is light, but it also lights up the cake; elegant between the layers of dark chocolate, the darkness of which makes a fine foil for the chestnut cream. The cake has a superfine flavor and a lovely clean finish. If I needed a mid-afternoon pick-me-up, I would go over to the Bakehouse to buy a slice, and then head down the walk to the Coffee Company to get a cup of coffee. Eating a bite of the Chestnut Rigó Jancsi isn’t quite the same as taking a trip overseas, but the excellence of the flavors, and the complexity of the confectionery can transport you for 10 or 15 minutes.

You can pick up a whole Rigó Jancsi or grab a slice at our Next Door Café. Pro tip – it’s terrific with an espresso!

> THIS IS A SEASONAL ITEM AVAILABLE SEVERAL TIMES THROUGHOUT THE YEAR. CHECK FOR AVAILABILITY!