New smoked tuna and smoked trout from Fishwife, a woman-owned start up

What’s in a name? Becca Milstein and Caroline Goldfarb write:

The term “Fishwife” dates back to the 16th century, and originally referred to the daughters or wives of fishermen who sold fish at the market. The term gradually evolved into a gendered insult for women who were brash, foul-mouthed, and brassy. We relate. 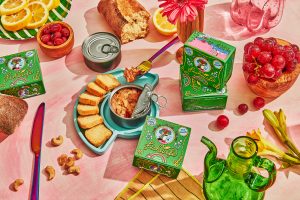 Both Becca and Caroline now live in L.A. They have backgrounds in music and entertainment respectively (Caroline writes comedy), but I’m mostly excited about how they’re helping to advance the cause of good eating. If you like tinned fish a tenth as much as I do, you’ll be pretty jazzed as well!

Becca and Caroline chose the name “Fishwife” for their new firm as a bit of intentionally ironic cultural push-back at the all-too-common criticism of women in leadership roles speaking their minds. They think of themselves as “tinned fish evangelists.” As you know, I’m also a BIG believer in the cause of conservas as well! In fact, I wrote a whole little book—Sardines! What Can’t They Do?—and have long been a big lover of anchovies, sardines, mackerel. I enjoy all of them in their fresh state for sure, though they’re equally terrific cooked or cured and carefully packed into small tins. Both fresh and canned are excellent but they’re very different eating experiences. We set out years ago (thank you Marshall for working on it with me) to have a selection of tinned fish as exceptional as what we stocked in the worlds of cheese, olive oil, and salami. Today there are probably 60 or 70 selections on the Deli’s shelves, all chosen for their quality and regional particularity. (The list includes some vintage sardines—yes, aging in tins makes the fish even finer!) Becca shared, “We’ve always thought of Zingerman’s as one of very few key curators of tinned fish in the US and we’re so thrilled to be stocked with you!”

Looking at the broader market, Caroline said in Vogue earlier this year,

Tinned fish is the true fast food. There’s literally no easier or healthier meal that you can “pop” in less than 30 seconds. And while tinned fish is having a renaissance among foodies and chefs, we think, in a time when so many are returning to their kitchens and looking for ways to keep their meals delicious, affordable, and healthy, it should be a beloved staple in everyone’s pantry. We really bonded over this mutual love—I think obsession is probably a better word—for tinned fish.

In one of those great connections in the greater Zingerman’s ecosystem, I was introduced to Becca by a longtime friend from San Francisco. Becca and I met on a Zoom call back in February. She knew about our very large “conservas collection” here at Zingerman’s and wanted to meet up. We chatted first by email, then by phone. Four months later, we have their tinned fish on the shelves. We have two today and more on the way later this year. Smoked albacore tuna, pole and line caught in the North Pacific. The smoke is significant, and the fish’s texture and flavor are marvelously meaty. The other offering is a super tasty Alderwood smoked Rainbow Trout from the Snake River in Idaho. Both are hand packed on the Central Coast of Oregon (where it’s supposed to be 114°F this week!). The boxes are beautiful—they’re designed by L.A.-based Danny Miller (check out his dog drawings!).

With both the Fishwives’ trout and the tuna you can add just a squeeze of lemon and a little olive oil and make a marvelous meal in under a minute. Add a spoonful or two of mayo and you’ll have a terrific tuna or trout salad. Put them on toast from the Bakehouse (I’ve been high on the Caraway Rye recently). Or add some to a green salad—I like to grate toasted breadcrumbs on top. Great tossed with pasta, rice, or couscous too! Both the smoked tuna and smoked trout make a good match with some of the new potatoes that are starting to show up on the market. Since they’re tinned, the tuna and the trout are both perfect for picnic lunches or culinarily advanced camping!

For context, it’s important to know that in Spain and Portugal tinned fish are at the top of the specialty food chain—they’re highly prized and greatly appreciated, for special occasions! For me, some super high quality tinned fish like this, turned out onto a nice plate, topped with a touch of great olive oil, fleur de sel, fresh ground black pepper, or red pepper flakes is one of the loveliest culinary sights I can behold. With that in mind I’ll leave you with a snippet of this lovely poem from Natasha Rao, a good friend of the fishwives:

I lay these memories, like a fish,
on the cutting board.
Slice them open &
the deepest blue
spills onto this poem.