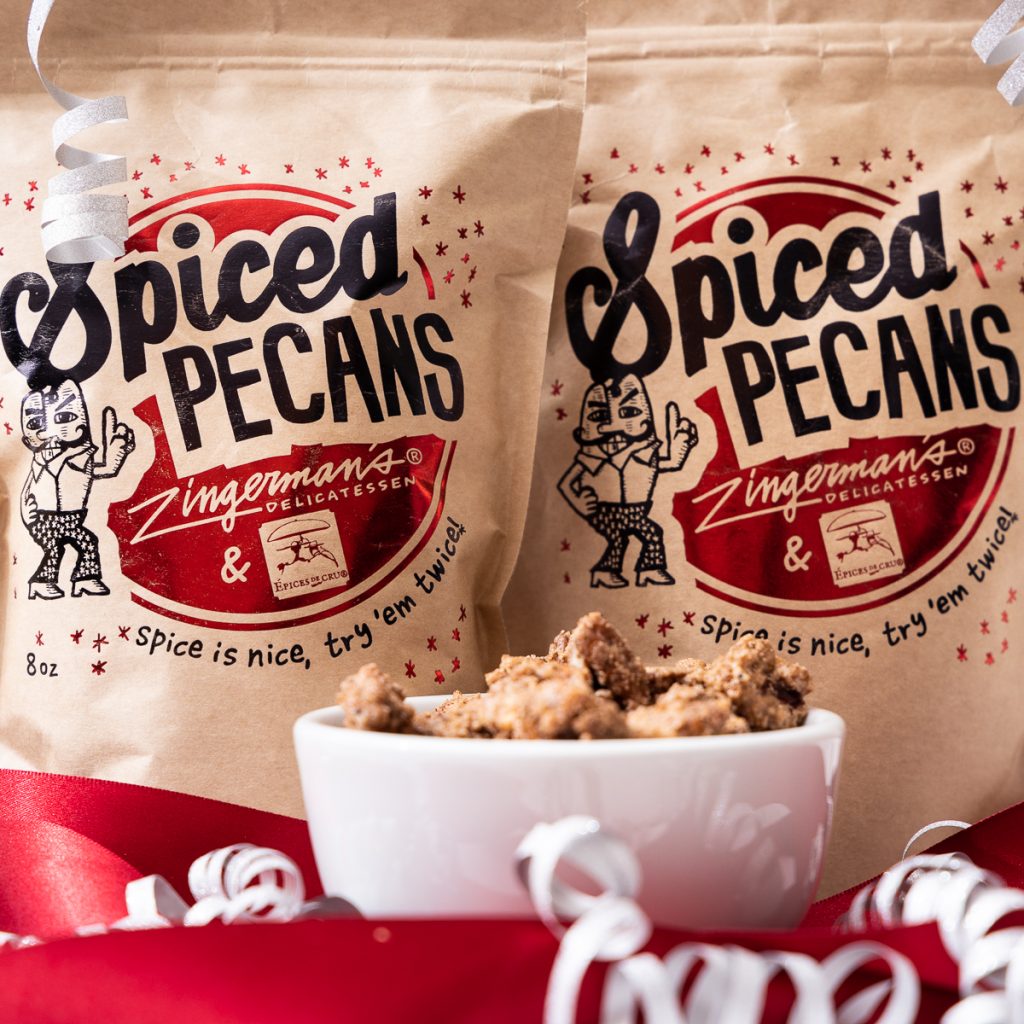 Spiced Pecans are one of our most-loved holiday offerings, and over the years they’ve become a Zingerman’s classic in their own right. We couldn’t be happier about it and wanted to take a moment to share the story behind this seasonal treat, from what makes our Spiced Pecans so unique to our favorite ways to enjoy them all throughout the holiday season.

As Rodger Bowser, Zingerman’s Deli managing partner says, “You definitely know it’s the holiday season when you start smelling Spiced Pecans in the Deli kitchen!” We make every batch by hand, and in our never-ending effort for continuous improvement, we’ve made a couple of changes over the years to enhance our already very good Spiced Pecans and arrive at the absolutely great version we make today.

In 2019, we started using pecans from the South Georgia Pecan Company in Valdosta, Georgia. The quality and flavor of the pecans stand out dramatically in side-by-side taste tests at the Deli; you might say we’d have been nuts not to make the switch!

Every batch of this seasonal specialty starts with those spectacular Georgia pecans. We toast them with butter, then, while they’re still warm, we toss them with our special blend of spices, like freshly ground Tellicherry black pepper, Jamaican allspice, and Indian cloves, just to name a few. And finally, we bag them up right here at 422 Detroit Street.

You Can’t Judge a Pecan by Its Packaging (Or Can You?!) 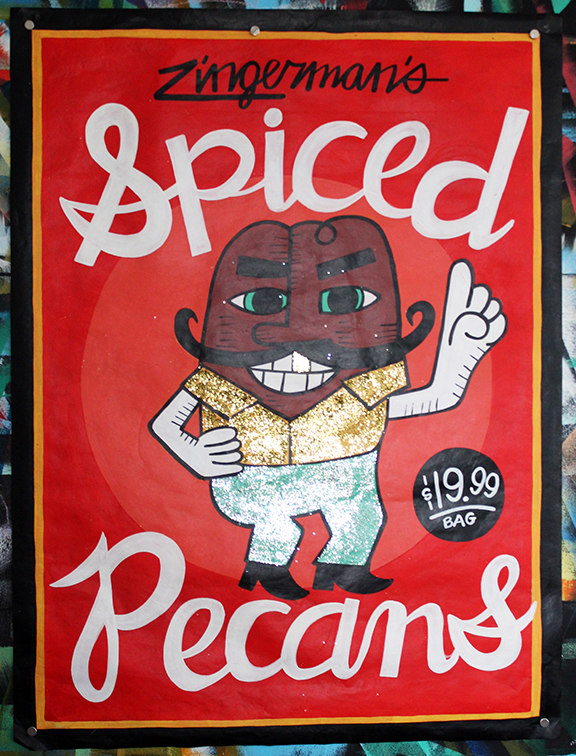 We don’t always talk about our packaging, but we’re especially fond of the packaging for our Spiced Pecans. It’s certainly a fun part of what makes them special and it’s gone through a number of iterations over the years. Around 2006, we used metal tins beloved by our production staff, with a label that, in the words of Nick Jaroch, our sign painter, “had a sort of exploding zig-zag thing going on, like when there is an explosion in a Looney Tunes cartoon … they were so classy and cool.”

Eventually, we switched to using stand-up pouches of varying colors with a large label that was designed to incorporate the spiced pecan illustration. For years, we would hand-apply each label across the street from the Deli in our merchandising space, then bring the pouches over to the Deli kitchen to be filled—we’ve since improved this approach!

That label and packaging were tweaked a bit each year, but the spiced pecan illustration has remained a constant from its introduction. A couple of years ago, Fielding Fowler, a former Deli graphic designer, put together the current label design with input from Rodger and Nick. We went for a design that could be a bit more evergreen, and then spiced up (eh, eh?) the stamped image on the front of the pouch with shiny red and black ink.

The use of shiny ink meant that the Spiced Pecan guy illustration (he’s colloquially known as Spicy Pecan, Disco Pecan, and Sparkle Pecan) got sparkly red pants. It’s been a much-loved wardrobe enhancement, at least among the Deli staffers. As Rodger shared,

Nick painted a poster of this pecan guy with glittery pants that is one of my favorite pieces of merchandising ever at the Deli. We like to make big, bountiful displays of these bags all over the Deli. Like hanging tinsel on your tree, it’s festive and fun and you know the holidays have arrived.

Nick added that the Spiced Pecan guy has now been painted by many painters at the Deli over the years and some really enjoy the liberal use of glitter when it comes to his pants! 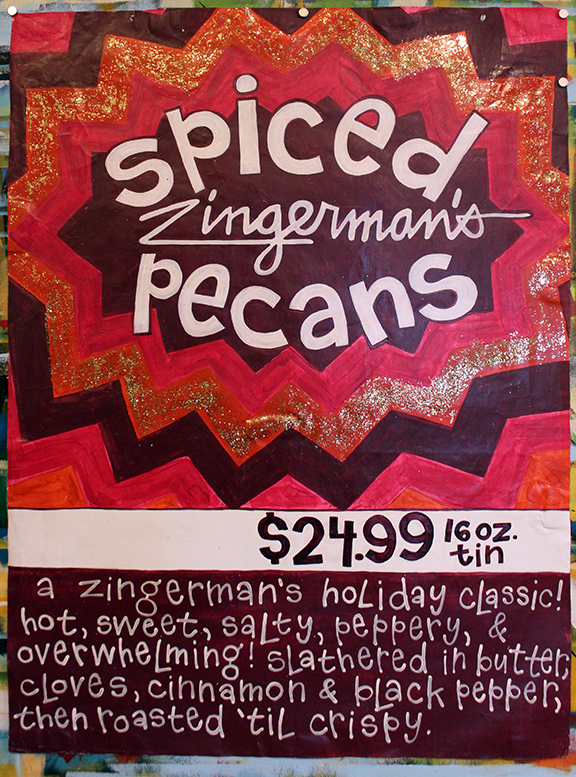 Our Spiced Pecans are delicious eaten just as they are. Put out a bowl at almost any gathering and they’re sure to be gone before you know. Don’t just take our word for it though—pop one of them in your mouth and you’ll soon find yourself eating an entire bag! In fact, some of our Deli Detail haven’t had them any other way:

People actually use them in recipes? They don’t just snarf down the entire bag immediately after opening it? I must be doing something wrong…

Roger Bowser, Deli Managing Partner, likes to set out Spiced Pecans for pre-dinner nibbling, too, but takes his appetizer game up a notch by pairing them with a couple of other items:

Pick up a bag of Zingerman’s Deli Spiced Pecans, crisp local apples (like from Nemeth Farms in Milan or Kapnick Orchards in Britton), and a block of cheddar—you can’t go wrong with Nor’Easter Cheddar from Cabot, but the new cheddars from Deer Creek in Wisconsin are also pretty fabulous. Put these three items on a tray and viola! A simple, yet delicious combination that’s sure to win over your kids, neighbors, or a crowd!

There are so many ways to enjoy Spiced Pecans beyond snacking though. Use them to jazz up your morning bowl of oatmeal. Add them into (or on top of) baked goods like cookies, muffins, cinnamon rolls, and quick breads. Sprinkle Spiced Pecans on rice pudding, noodle kugel, and gelato. And don’t let sweet dishes have all the fun, either; Spiced Pecans make savory dishes sing, too! They lend a sophisticated touch when topping sweet potatoes, roasted carrots, or stuffing. Nancy Eubanks, Deli Catering Director, makes a festive Spiced Pecan Salad with fresh greens, Faribault blue cheese, sliced pears, Spiced Pecans, and a balsamic vinaigrette. It’s such an irresistible combination, her salad has become a permanent fixture on Catering’s Holiday Menu!

What we’re saying is that there are likely endless ways to enjoy Spiced Pecans. They’re an important part of the holidays here at the Deli and we look forward to hearing how you enjoy them!

Stock up on Spiced Pecans for the holidays:

SHOP OUR ONLINE STORE FOR PICKUP OR ANN ARBOR DELIVERY