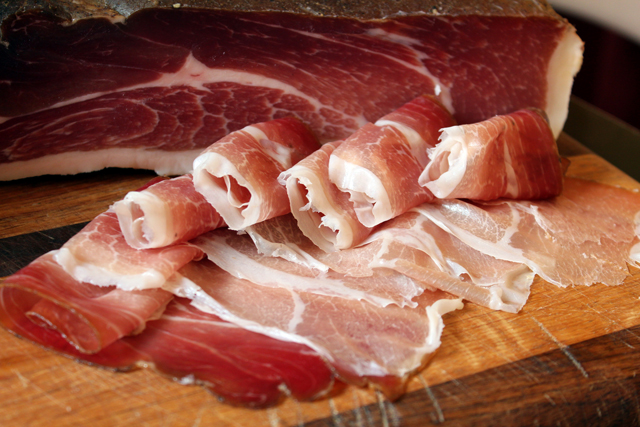 While Prosciutto di Parma rightly wins raves all over the world, and while American country ham has gained great attention in the last few years, there are regions in almost every part of the world that a) eat pork and b) have a climate temperate enough to cure a ham properly. Speck is the unique cured “country” ham of the Alto-Adige region up in the Dolomites, near the Austrian border. It’s lightly smoked and lightly spiced cured ham. Speck makers take the bone out of the fresh hams before the pork is cured and rub their fresh hams with spices before aging and smoking. Exactly which spices anyone uses is a big-time closely guarded secret that no one is to divulge.

Speck smoking is always done at very cool, low temperatures so that the meat is never cooked, but simply seasoned by the smoke. Hold a freshly cut slice up to your nose and it smells sweetly of smoke, and subtly of the spices that are used to cure it. Taste it and you’ll work your way through layers of flavor. First, there’s the spice. A bit of pepper, some juniper, and other secret spices. It brings a liveliness, almost a touch of the medieval to the experience. That’s followed on the palate by the smoke. And then beneath all that you come back to the pork, which is solid, delicious, a bit refreshing really. It reminds me of eating great smoked salmon. The fat and the spice spread nicely over the tongue and linger a long time.

It’s great on buttered slices of any Zingerman’s Bakehouse‘s great breads, but particularly the Dinkelbrot, Vollkornbrot, Miche, or Farm bread. In its home region of the Sud Tyrol, speck is used a good bit in cooking as well. Specknodeln are very typical—basically matzo balls, or dumplings, made with small pieces of speck mixed into the dough before they’re cooked. Speck can also be used to season soups or sauces, chopped and added to salads, noodles, or rice dishes. —

Head to the Deli for Speck!

P.S. Remember that when you eat cured hams like speck, they’re radically more flavorful when you serve them at room temperature. It makes a big difference just as it does with cheese, pie, wine, most anything else.