A Mix Of Cultures

Radical historian C.L.R. James, in a statement after my own heart, once said “Every cook can govern.” I’m not sure that the reverse would work though—I doubt that every governor can cook. That said, if they had access to some of the Épices de Cru spice blends—like this Trinidad curry—even career politicians could likely do pretty well in the kitchen. All of the spices that we get the de Vienne family—this blend included—are so fantastic and so easy to cook with that they can make any novice into an impressive cook in a matter of minutes. Equally exciting, because the quality of the spices is so exceptional, that they’re just as appealing to aficionados. Many of our most culinarily serious customers have completely switched over in the 12 months we’ve been bringing Épices de Cru products to Zingerman’s. (One told me he threw out every spice he had at home and started over again!) The de Vienne’s Trinidad curry is such a beautiful blend. If calypso music were to go culinary, this is what I imagine it would like. Lively, sunny, colorful, subtle, yet still pointed and vibrant. Calypso music, like this curry, and so much of Trinidadian culture, is a blend of various “imports” adjusted and added to become distinctly Trinidadian. The music style—which later influenced ska and reggae among other Caribbean musical genres—likely originated with west African slaves brought to the island to work the sugar plantations. Because enslaved peoples were forbidden from communicating amongst each other (to reduce any chance of revolt) they developed calypso music as a way to share information and taunt plantation owners behind their backs. As the centuries passed calypso stayed on the cutting edge. throw insults, but almost always in a slightly veiled, subtly sardonic but memorable way. The same I would say, applies to this Trinidad curry blend. It’s not all that hot—just interesting, lovely, memorable, entertaining, different and delicious. When you open the tin you’ll find an array of colors, what you (or I at least) might imagine what a Caribbean market might look—greens, oranges, yellows, blacks, browns and reds. Stick your nose in the tin—there’s so much going on it’s hard to pinpoint any single scent. When you read the ingredients list you’ll see why. turmeric, coriander, cumin, thyme, mace, bay, mustard, fenugreek, nigella, green onion, habanero chiles, thyme, fennel seed… 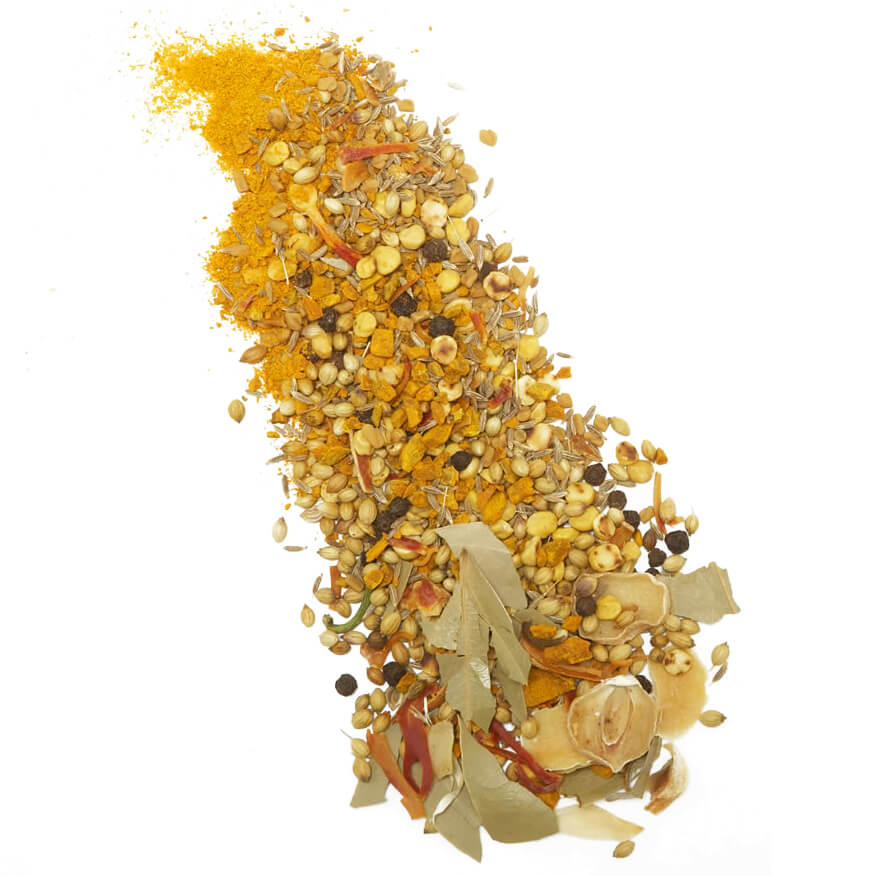 In this case, it was Indian laborers in 1845, brought to the island to replace enslaved Africans who had been freed on August 1, 1834. Trinidad never had the kind of large plantations that existed elsewhere in the Caribbean—most estates were small with a small number of slaves living under somewhat less horrible conditions than elsewhere. Many freed slaves from other islands moved thereafter emancipation, increasing the African influence on the island.

In 1985 Trinidad and Tobago become the first country in the world to establish a national holiday to celebrate emancipation. The Indian migration continued until the early part of the 20th century by which point curry was a part of every Trinidadian cooking. Of course, the island also has heavy influences from Spain, France, the Netherlands, Lebanese and Chinese as well as the African, Indian and native presences. Curry pops up in kitchens—home and restaurant alike—all over the island. It sounds like curry chicken is the most popular dish, but cooks also regularly curry duck, goat, fish and vegetables. Today the chicken curry is often served in a sandwich roll up on a typical flatbread called roti. By the way, it’s also terrific if you grind the Trinidad curry mix and use it to toss on popcorn. And, as I said, you can try it regularly with the curried turkey on the #201 RAISIN D’ÊTRE. I’ve made mixed vegetable curries with it at home and loved them. I add a bit of extra cumin to the mix because it’s one of my favorite flavors of all time. I also made a fish, potato and cauliflower curry that really kicked! You can, of course, do as you like. Curry making is ideal for using whatever you like and whatever you have on hand.

How To Use Trinidad Curry

Grind the curry mix a bit in a spice grinder or mortar and pestle. Add it to hot oil in a pan and stir regularly for about sixty seconds being sure not to burn it. Add in potatoes or whatever vegetable you’re doing to use, toss well and cook for a couple of minutes, stirring regularly. Add water to cover, bring to a boil, reduce heat and simmer for an hour or so depending on how well cooked you want the ingredients. I added the fish or seafood near the end so as not to overcook it. I like to add a good dose of ground black pepper or ground long pepper, at the table. Reheats wonderfully the next day too if you don’t finish it all the first night!

The Blend Mistress and Blend Master

All of this becomes even more appealing when I remember that Ethné de Vienne is originally from Trinidad. I imagine this is the sort of spice mix she’d have grown up with before moving to Quebec as an adult. Ethné is the only Blend Mistress along with Philippe, the Blend Master (Marika is still apprenticing) at Épices de Cru. Here’s what she says:

“I can testify not only to the almost overwhelming complexity of this particular blend, but also to the high degree of concentration required to create it. When we first made it years ago, the result was to say the least, ordinary. I tried in vain for the longest time to nail down exactly why I personally found it so uninspiring and it eventually required a trip to Trinidad to get to the bottom of the conundrum.”

Having grown up with this type of spice seasoning was obviously not enough to re-create this proudly Trinidadian blend. I mean folks of every ethnicity literally had their hand in the mix. Not only did the Indian population bring some of the usual suspects from the continent like; cumin, nigella, coriander and turmeric to the party, but the clever incorporation of grilling and roasting the spices also added the “je ne sais pas quoi” that makes this blend so unique.

Typically, indigenous Creole herbs and spices such as West-Indian bay leaves, mace and thyme as well as habaneros also secured their place in Trinidad curry and we can only speculate as to who was responsible for the inclusion of lentils and shallots! I’d love to give kudos for that particular idea, but on an island where EVERYONE has an opinion on just about everything, individual voices are often impossible to distinguish. I’ll spare you the intricate details, but for just one second try to imagine one portion of a particular spice that is roasted, one that is grilled and yet another that is incorporated in its natural state. Then tax yourself even further and try to imagine the same exercise being done with three or four different spices – in the same blend! That my friend is the definition of an attention-grabbing, boldly flavorful and easy on the eyes recipe, that can turn just about anything into a memorable meal. When you think about it’s much like the calypsos, the chutney music and the steel band, all things that were invented on the tiny island and which have gone on to conquer the world. If as the Trinidadians say; “God is a Trini”, then I think we could also admit that she’s probably also quite the gourmet. She probably has this curry for dinner at least a couple of times a week!—

Head to the Deli for a taste of this vibrant curry!