Adapted from the writings of Ari Weinzweig

I had the pleasure—culinary, cultural, and educational—of visiting the Peduzzi family, makers of the excellent Rustichella pasta. Gianluigi Peduzzi runs Rustichella with his grandfather, who started the company in 1924. What was an already excellent relationship is now far richer, more interesting. I now see—and appreciate—pasta, and the pastificio Rustichella d’Abruzzo, more than ever. Pasta for me will never be the same.

While most of us see spaghetti as pretty stable in an often undependable world, the reality is that pasta—the way it’s produced, cooked, consumed, and perceived—has actually been changing all along. What’s different for me now is that, after my visit and months of reflection, I’ll never forget that fact again.

Pasta is the quintessential Italian food, and Italians eat it in enormous quantities. Add in the fact that you’re making exceptionally good, notably-more-flavorful-than-the-stuff-in-the-supermarket, artisan pasta, like the much-loved-at-Zingerman’s Rustichella brand (“the one in the brown bag”)… and it seems like as straightforward a recipe for success as one could possibly script.

A Challenging Start for a New Business

1924—the year that Gianluigi Peduzzi’s grandfather, Gaetano Sergiacomo, got going in the pasta business—might have been one of the worst times in Italian history to start making pasta—maybe akin to opening a bank in 2008. Of course, history gives us 20-20 hindsight. But take a look back at some of the stuff that Gianluigi’s grandfather would likely have been talking over with his friends and relatives when he got home from work, all covered with flour, sweaty from making spaghetti in the hot Abruzzese heat, and—if his start-up experience was anything like all the ones I’ve been through—emotionally exhausted.

For openers, the economy in Italy in 1924, while not the worst the world has ever seen, was pretty terrible. More specific to Gaetano’s work, the wheat crop in 1924 was not good, and prices were going up and up, making commercially produced pasta difficult for the average Abruzzese to afford. Most people weren’t even used to going out to buy pasta back then.

While the pasta in places like Naples and Genoa—the capitals of commercial pasta making in Italy for many centuries—was much more commonly made by artisans and sold in shops or delivered to wealthier homes, in much of the country (like the Abruzzo), what most people were eating was still primarily homemade. Back in 1924, Gianluigi explained, “this pasta like my grandfather made was a luxury product and was mainly purchased and consumed on Sundays or during the holy days.” It was called pasta comprata (purchased pasta) to distinguish it from the pasta that people made every day at home.

And the raw materials often weren’t all that great either. “The wheat,” Gianluigi told me, “was terrible. Only soft wheat.” This wasn’t really a new problem: the history of Italian pasta making shows a steady back and forth between people who could get the higher-quality, harder durum wheat, and those who were working the lower end of the quality scale. Many pastai (pasta makers) at that time offered different grades of pasta, the best made with 100 percent pure durum semolina, gradually going down in quality and cost as more and more soft wheat was blended in.

The Impact of Italian Politics on Pasta

The strange stylings of Italian politics compounded the problems. The majority of the top-grade grain used to make Italian pasta was imported, and Mussolini was adamant about reducing that amount. With less high-end grain to be had for pasta making, costs rose and quality fell—not good news for a quality-oriented pasta maker. Eating patriotically meant shifting one’s diet to polenta and rice. In 1928, the Fascist regime pushed its agenda even further by creating a National Rice Board and instituting National Rice Day. “Ricemobiles” were sent out all over the country to hand out free rice to homemakers to get them to put away the pasta and ring in a new, rice-based era of Italian culinary and economic independence.

One seeming upside might have been that the American appetite for pasta in the first decades of the twentieth century was on the increase, and the population of Italian immigrants here was ever more substantial—a new businessman might reasonably have dreamed about the potential of a big export market. Unfortunately, the closing of the shipping lanes during WWI, high wheat prices in Italy after the war, and Mussolini’s Battle for Grain meant that high hopes for exports never panned out. In fact, U.S. imports of pasta from Italy dropped drastically, sinking from 78,000 tons in 1913 to about a sixth of that level in 1928. 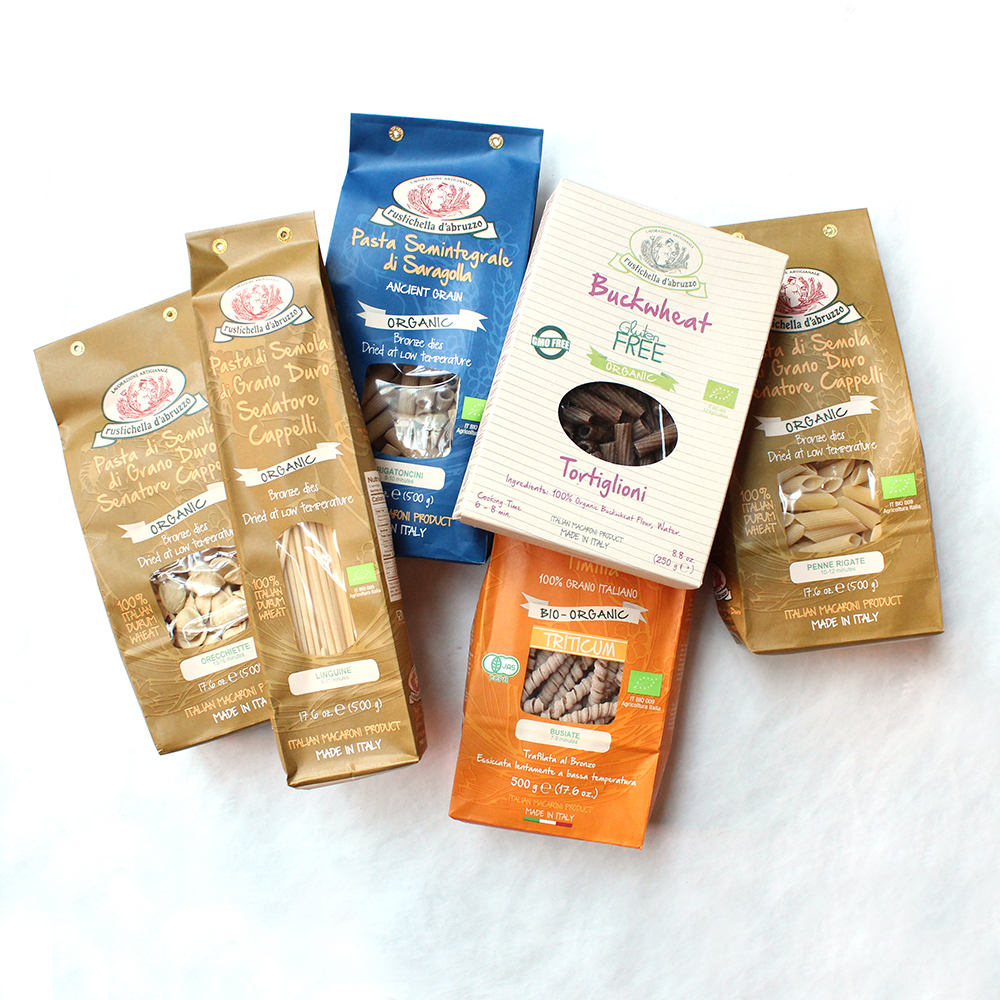 The Challenges of Making a Local Product More Widely Available

Throughout most of the 1900s, pasta remained pretty much a local product. Every town had its pasta factory, or maybe more than one; what we now call Rustichella was just one of the small pasta producers in the Abruzzo. “Until 1981,” Gianluigi told me, “almost 100 percent of our pasta was sold at the market in the town of Penne. The production was Monday to Friday, and the market was Saturday. The customers would come to the market at six in the morning, give the order and then come back to get the box at the end to go home.” Pasta at that time, by the way, was still pretty much all sold in bulk. As Gianluigi explained, “During that period, pasta was sold loose and packed only at the moment of the purchase. The quality of the product was visible according to the color of the wrapping that was red or blue.” The sort of one-pound (or one-kilo) package we’re now so familiar with came to the U.S. only in the 1920s, and in most of Italy remained little known until our own era. “Gaetano Sergiacomo,” Gianluigi elaborated, “made our first paper bag, and still today this package characterizes our products, together with the brass studs.”

It’s worth noting that while the shapes of the pasta back in Gaetano’s era were pretty much what we’re familiar with today, the pasta itself probably didn’t taste exactly like what we’re used to. As Gianluigi said, most of the wheat available in the Abruzzo at the time wasn’t all that great. Even if the flavor of the grain itself was good, it can’t have been very consistent in the all-important-to-the-pasta-maker protein levels or gluten content. And while inconsistency probably wasn’t all that big of a deal when you were making pasta on the kitchen counter at home, it’s not conducive to making something special on a wider commercial scale.

The Influence of Modern Technology on Artisan Techniques

It’s also important to understand that the times were changing in terms of technology. These days, the fact that small producers like Rustichella, take upwards of two days to dry their pasta in machines made to work at fairly low temperatures is considered a marvel of modern-day artisan dedication. Their commercial competitors like Barilla and DeCecco do the drying in a matter of hours, yielding a pasta that’s basically “baked” and hence is brittle and breaks up during the cooking rather than retaining the chewy al dente texture that Gaetano would have liked.

A hundred years ago, though, two days wouldn’t even have been enough to get the work started—drying then took anywhere from two weeks to over a month! Done with only the sun and ambient air, the drying process took place in big open buildings, where racks (for shorter shapes like maccherone and penne) or carts with pasta hanging on poles (for long cuts like fettuccine, spaghetti, and linguine) were left to set, and the moisture in the dough gradually evaporated. Under the right conditions, the racks were placed in the open air. Older Italian pasta makers still tell stories of how they had to watch the pasta to protect it from goats, dogs, and other “predators.”

The Advent of Al Dente

While far less extreme than in, say, 1800, that regional difference is still strong. On my visit this past summer, Rolando Beremendi, the long-time American importer of Rustichella, lamented one night at dinner how hard it is, even in restaurants in Italy, to find properly cooked—very al dente—pasta. “Really?” I asked, surprised. “It’s terrible,” he said, shaking his head. “I like it cooked for just seven minutes, with a little ‘crack’ in the middle still. But in Florence [where he lives], they kill dry pasta. And in Bologna! God forbid you should order dry pasta! They are only used to fresh pasta, so they don’t know how to cook pasta secche properly!”

2 responses to “The Historical Twists and Turns of Traditional Pasta”