A taste of traditional Greek salami-making from the West Coast 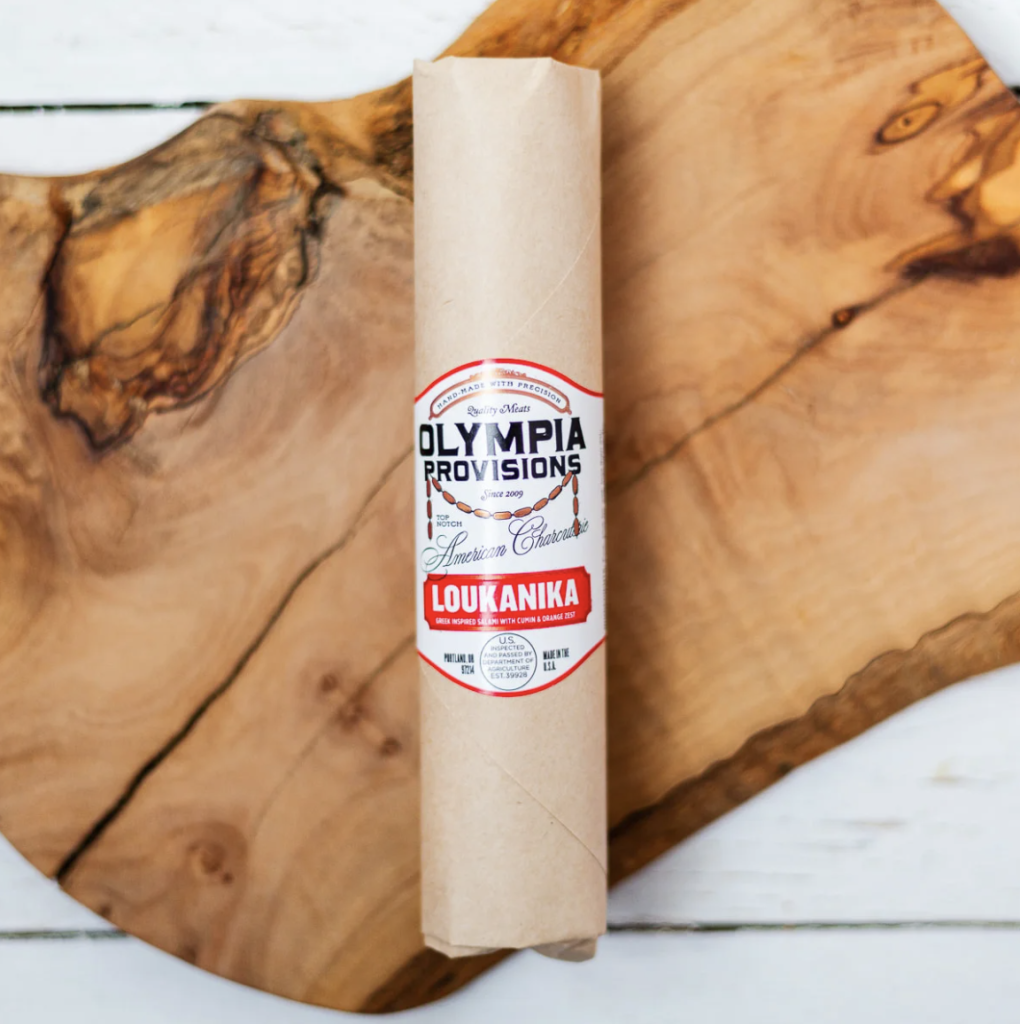 Out west in Portland, Olympia Provisions is crafting some of the best of the new generation of American charcuterie. The two co-founders, Nate Tilden and Elias Cairo, both have restaurant backgrounds, so I can relate a bit to where they came from. All of their many products are carefully crafted and terrifically tasty. My favorite, though, is this lovely Greek-style Loukanika salami. It brings some of the flavors of Eli Cairo’s Hellenic heritage into play with the thriving charcuterie scene in Portland in the 21st century. I’ve long loved it, and while eating a few slices from last week’s new shipment, I was reminded that I’d been meaning to share “the secret” for far too long! So now, here you go!

Like all the offerings from Olympia, the Loukanika salami starts with sustainably-raised, heritage pork—you can taste the quality of these old breeds of pork in the complex, full flavor you get with every bite. Well over 95% of pork raised in the U.S. right now is from factory farms. Olympia, and the other folks we buy from, are a tiny minority of artisans who are actively working hard to return hog raising to more regenerative practices. Here’s what the Olympia crew has to say on the subject:

We’ve dreamt of consistently sourcing environmentally regenerative, humanely-raised pork from the Pacific Northwest. We value a “whole animal” approach to animal use, which led us to make pet treats from the leftover stuff humans aren’t into but dogs love. We are on a quest to have a 100% small farm supported line of salami, sausage and other tasty treats by 2024, because we believe in the hard work, quality and attention to the animal that small farmers are all about.

Building on the high quality of the pork, the spicing of the salami is also superb. There’s cumin, garlic, and hints of orange zest—all used to build on an old Cairo family recipe. The Loukanika is naturally fermented (much like a well-made cheese) to slowly develop its flavor as salami has been matured for millennia now. Like all the Olympia Provisions products, and like all the salami we sell, it will have a lively coating of white mold on the outside. It’s an important part of the fermentation process and also the slow, natural development of the flavor. Just as it does with the Creamery’s Manchester or Brie cheeses, the mold is a big part of what makes this lovely Loukanika what it is.

The Loukanika salami is super tasty and easy to use in a thousand different wonderfully delicious ways. Great in salami and eggs, and cut into small cubes and tossed into salad or pastas. Cut it into thick slices and serve it up for a snack, or eat it alongside a green salad. I love it with good feta cheese, or with some of the Bakehouse’s great French baguette.