Kamā gets us world-class sumac 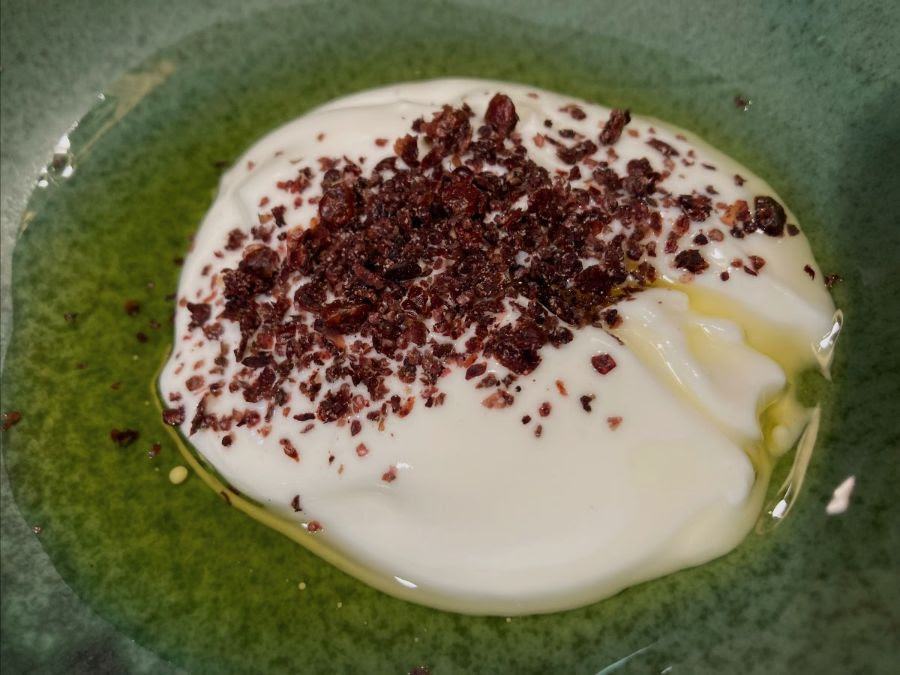 The beautifully aromatic Za’atar spice blend we get from Jumana Jacir and her team at Kamā working at the artisan workshop in the capital of Jordan were one of the big hits of the Best of 2022 tastings we did a few weeks ago at the Deli! The response to the Za’atar was so enthusiastic (we sold out quickly—more is coming) that I got thinking to say something about the Kamā Sumac as well.

I first heard about sumac years ago listening to local musician Dick Siegel sing his amazing song, “When the Sumac is on Fire!” It’s a wonderful song by one of Ann Arbor’s longtime musical greats. I put it on the other day while I was eating a bit of this terrific newly-sourced sumac we have at the Deli from Jordan! Used widely throughout the Middle East and Asia, sumac is lemony, earthy, and subtly sweet. Sumac’s flavor is so unique it’s hard to categorize, but it adds complexity and quality to most any dish in which it’s used. Tammie, it turns out, is a huge fan: “It changes everything you use it on. There’s nothing like it. It’s lemony and bright. I love it!”

Kamā (means “desert true” in Arabic) products exist in part because of the vision of Jumana Jacir, founder and owner. Jacir has a degree in design from Concordia University in Montreal, but decided to head back home to Jordan to start a business through which she could empower disenfranchised women in Jordan. Everything from the story to the package to the product inside the jar is beautiful. Delicious and authentic, it is very much aligned in spirit and practice with Douglas Cardinal’s work. Jacir says:

Kamā is about reclaiming the narrative not being spoken for. We at Kamā are forever seekers of our homes’ delights. Our hearts yearn to immortalise Arab and Levantine flavours, while our hands constantly innovate, refine and redefine our culinary narratives. What some might call the local community, we call family, and family always supports one another with moments of wonder and experiences to share. Our land’s heritage is our fortune, and we treasure it by bringing together our food cultures through a passion for crafting things—and crafting them beautifully.

Sumac, if you don’t know it, is native to the Middle East. The bright red berries of the bush are dried and ground into a spice blend in many cultures. Kamā deseeds, sun-dries, and grinds them to make what you and I buy. Kamā’s Sumac is made of 100-percent pure sumac berries, without any other additives or fillers. (The sumac is also a key ingredient in their Za’atar.) Use generously on roast chicken or vegetables, or sprinkle on your salad. Great for roasted potatoes, carrots or onions. In Jordan, folks will commonly toss a bit atop hummus and baba ghanoush. Really, you can sprinkle Sumac on almost anything—salads, bean soups, feta cheese, and more. Sumac is also said to have a host of health benefits—positive impact on blood pressure, high in anti-inflammatories and antioxidants. Terrific for avocado toast, especially if you put a fried egg on top! A bit of it sprinkled onto slices of that Tunisian Olive Oil Cake I wrote about last week is lovely, both to look at and to eat.

The Kamā Sumac is super tasty on a plate of that Bellwether yogurt at the Cream Top Shop. Made from the milk of Jersey cows it’s exceptionally rich and flavorful. (We’re going through a quart container or two a week at our house.) Put a good bit of the yogurt onto a plate, make an indentation in the middle, pour on a bit of the Moulin de Mahjoub olive oil from Tunisia, and then as much sumac as you like. Scoop it up with warm bread! Wonderful for breakfast, as a snack, or with supper!