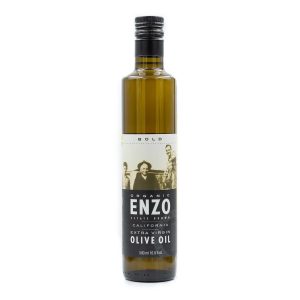 The story of the Enzo Olive Company begins back in 1914, when Vincenzo Ricchiuti made the voyage from Puglia in Italy—home to the bread we know here at Zingerman’s as Paesano—to the U.S., ending up in the Central Valley of California. The year in which Ricchiuti arrived in North America was at the end of four decades of mass immigration from Italy. Between 1880 and 1914, more than four million Italians came to the U.S. The window closed when WWI began in 1914. The vast majority of those immigrants were young men looking for work. Most came to the States intending to later return home to Italy, but less than a third of them ever did. Like most rural Italians of that era, Vincenzo was very adept at growing vegetables in his garden. (For a beautiful understanding of Italian immigrants, gardening, and people trying to make their way in a new place, see Angelo Pellegrini’s The Unprejudiced Palate. Pellegrini came to the U.S. from Tuscany in 1913, a year before Ricchiuti.) As many of us have done, Ricchiuti figured out how to turn his passion into his profession. His grandson, Vincent Ricchiuti, writes, “Initially, my great-grandfather planted vegetables, but knew diversification was key for long-term sustainability. With this in mind, he planted the first family acreage with grapes and figs.”

In 1956, the same year as the Hungarian Revolution, Vincenzo’s son Pat turned the family farm into a formal business. The P-R Farms brand quickly became widely known for premium quality peaches, plums, apricots, nectarines, citrus, grapes, almonds, and olives. Four generations later, true to the olive oil-producing region of Puglia from which Vincenzo Ricchiuti had grown up, the family began the olive oil business in 2008. In honor of Vincenzo, they used his nickname, Enzo, on the label. Following the family’s century-old commitment to excellence, Enzo Olive Oil has never stopped its pursuit of making high-quality products.

The climate in the Central Valley is very close to that of the Mediterranean. What we have on hand now is made from the Koroneiki olives they’re growing. To use a football metaphor, the Enzo oil runs beautifully right up the middle of the flavor-field. Significant but not strong; fruity, gentle, complex, and full-flavored all at the same wonderful time. It’s so good that this summer it made Food & Wine’s “Five Favorite New California Olive Oils” list. The Enzo oil is awesome on anything you like olive oil on—bruschetta, pasta, vegetables, fish, steak! Try it on toasted Paesano—the bread Vincenzo would likely have grown up on back in Puglia. If you want a great breakfast, make toast, pour on a bit of olive oil, and spread it with one of the wonderful jams or honeys we have on hand!!