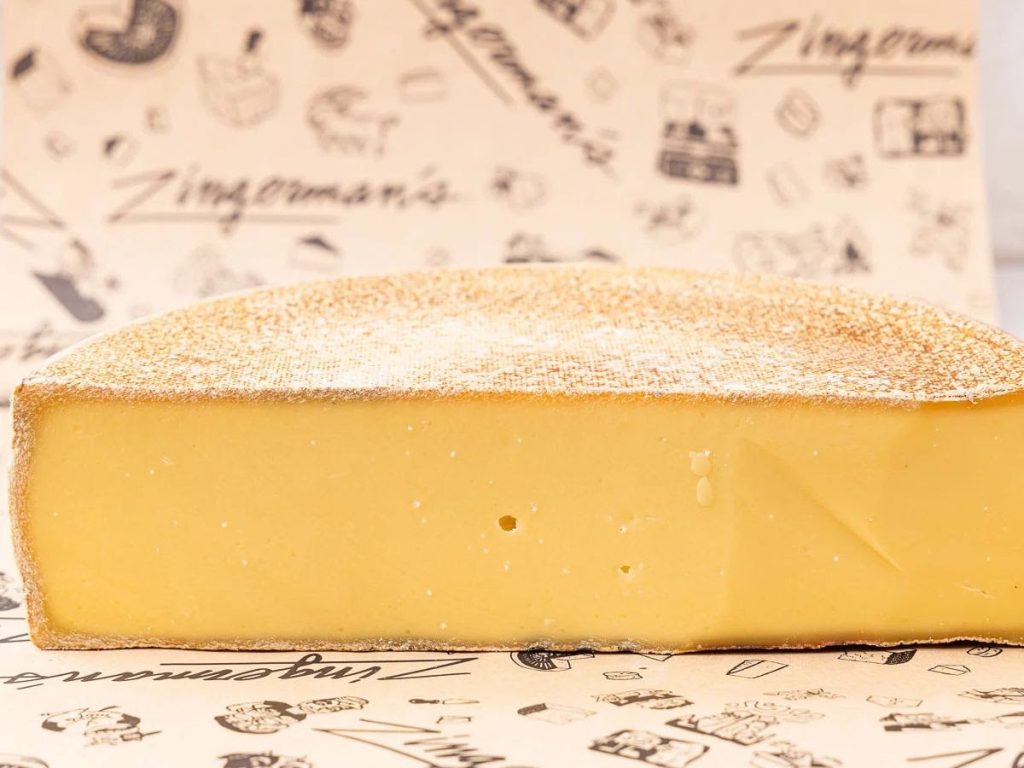 I’ve been working on a new pamphlet that will be entitled, “A Taste of Zingerman’s Food Philosophy: Forty Years of Mindful Cooking and Eating.” This limited-availability cheese from the Alps is the sort of food that fits into philosophy beautifully—full-flavored, traditional, little-known, but lovely to eat. It’s the sort of food that we love, but one that you would never come across in the mainstream food world. The Berglialp Alpkäse is a product that helps keep its local community alive, a cheese that encourages all of us (including me) to take in the amazingness that can be created in the natural world.

The Alpkäse (which, yes, simply means “Alp cheese” in Swiss German) from the Berglialp is one of four exceptionally rare Swiss selections we have this year as per our now our 7th year working with the Adopt an Alp program that friend and importer Caroline Hostettler had the wisdom to start back in 2015. While most Americans have been led by the mass market to believe that there is a singular “Swiss cheese,” or at best maybe two—Emmental and Gruyere—the truth is that Switzerland has hundreds of local cheeses. In the spirit of the French term terroir (the influence of the soil and ecosystem on what comes from it) each Alp has traditionally had its own distinctive cheese. The Adopt an Alp (I appreciate the alliteration a lot) makes it possible for the cheesemakers to thrive by guaranteeing them the sale of their very special cheeses. Since the cheese isn’t sold for a year after it’s been made, Adopt an Alp lets the makers stay true to their craft, without having to worry about whether or not they’ll be able to pay their bills in the interim.

This particular cheese comes from Berglialp (which basically means “mountain village”) on the eastern end of the country, near the border with Austria. It’s made by Heinrich and Ursi Marti-Kramer at 5300 feet of altitude (that’s just over a mile up in the air!), near the village of Elm in Canton Glarus. They make the cheese on-site in two different huts which can only be reached by foot. The family has managed the mountain since 1903, a year after the Deli’s building was built here in Ann Arbor. As with all of the Adopt an Alp cheeses we get (and as with all of what are known in French as “alpage”) cheeses, the herd of a hundred-plus cattle is walked up to the top of the mountain in June and then back down to the valleys again in the early autumn. The milk produced when the cows are grazing on the unplowed meadows that high up is especially excellent. The diverse diet (there are dozens of different wild herbs and grasses growing) increases the complexity of the flavor which makes it possible to craft better cheese!

The newly made cheeses spend a day in a salt bath immediately after being pressed, then are rubbed with a bacteria (good ones)-laced salt brine for the next two. The cheese is matured on wood boards and turned regularly for months. What we have now on hand is from the summer of 2021 so it’s now about 15 months old. The finished flavor is big, sturdy, significant with wonderful earthiness, a meatiness that reminds me a bit of long-cured mountain ham, and a nice nose. Great as is, of course (really recommend it at room temperature to taste the full flavor), for fondue, or a sandwich. Very good with a bit of butter on a slice of the Vollkornbrot, Dinklbrot, or Country Miche from the Bakehouse. A rare and really tasty treat from a serious side trip to one of the most scenic routes one can find in Central Europe.