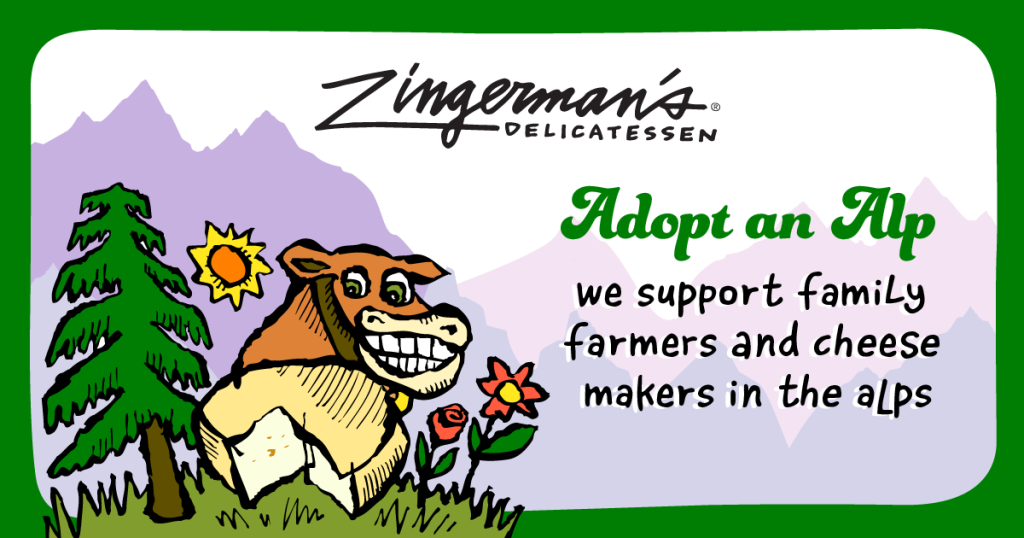 Each year since 2015, Zingerman’s Delicatessen has helped support the family farmers and cheesemakers in the Alps of Switzerland through the Adopt An Alp program. We joined up with a handful of cheesemongers a few years after this program started. There are now over 100 cheesemongers and restaurants in the US that are supporting the effort.

The Adopt an Alp participants all practice the traditional cheese-making methods in Switzerland. They represent the full spectrum of traditions, rituals and specialties of this region and also have proven to be able to fulfill the requirements of quality and communication that makes this program so valuable.

Adopt an Alp has a mission to connect cheeselovers, makers and sellers with great tasting, traditionally made alpage cheese. Through education and availability of these seasonally made, hand crafted cheeses, we get to connect with and learn about the people and animals that make it possible for us to enjoy these precious cheeses.

What makes these cheeses so special?

Cheesemakers in this region practice transhumance, a tradition of people and animals moving in accordance with the seasons.  It originated over 8,000 years ago and is how these Alpage cheeses are made.  Dairy farmers in Switzerland move their family and cows from the valley to the higher meadows during the summer season to escape the heat and produce these cheeses.

The cheese begins to arrive at the Deli in the fall and we usually have enough to get us through the holidays.  We enjoy these cheeses on a cheeseboard, in a fondue, or just for snacking.  For more information about the Adopt and Alp effort to connect American cheesemongers and consumers with Alpage cheeses, visit their website or follow them on Instagram or Facebook. 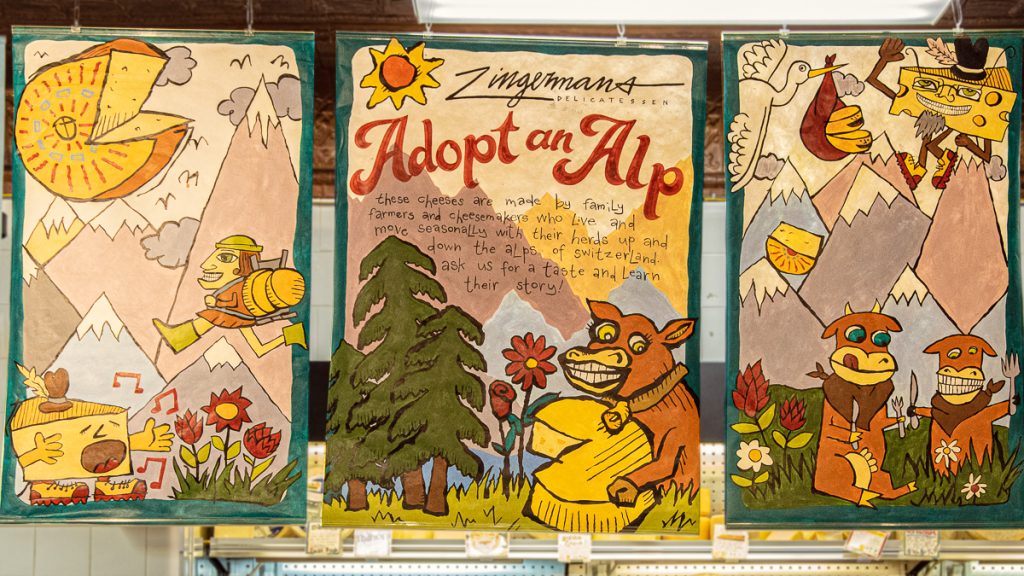 One of four exceptionally rare Swiss selections brought in for the holiday season in partnership with the Adopt an Alp program. Berglialp Alpkase is made by Heinrich and Ursi Marti-Kramer at 5300 ft. above the village of Elm in Canton Glarus. They make the cheese on site in 2 different huts which can only be reached by foot. Berglialp is also an award-winning spa and wellness center where you can spend your vacation and stay in one of three chalets.

Around 130 mother cows and calves and a dozen milk cows spend their summer on Berglialp, an alp just north above the village of Elm in the Canton Glarus. 1.5 tons of Glarner Alpkäse are produced every transhumance. Heinrich and his wife Ursi both are alternatively making cheese, depending on what tasks the day brings.

The staff on the Alp includes a farmhand who does the grass cutting, mending fences, etc. as well as a herdsman who alone stays with the mother cows on the highest pastures of Berglialp during the peak of transhumance. And there is a female employee who tends to the vacation huts, restaurant, and a spa where you can stay in one of three chalets.

One of four exceptionally rare Swiss selections brought in for the holiday season in partnership with the Adopt an Alp program. Female cheesemaker Flavia Carobbio converts exceptional alpine cow’s milk in the summer months high above the Leventina Valley, situated in the Italian speaking Canton of Ticino. She also operates a shop that is a favorite stop for visitors who are hiking and biking in the region.

Located at close to 6000 feet a.s.l. Alpe Carí above the Leventina Valley in the Italian speaking Canton Ticino can be reached by car. However, you need a good 4×4, and it’s quite an adventurous drive on narrow dirt roads with sharp turns.

Alpe Carí is operated by the “Azienda Agricola Piz Forca” (Farm Peak Fork). The cattle from different owners spend their summer up there. All the cheese that is produced during that time is handled and sold by the operation. At the end of transhumance, all the owners are compensated according to the milk production of their cows. For that reason, three times during the summer the morning and evening production of each cow is measured in order to create an average weight per cow and owner.

Besides dairy products like butter, ricotta, and yogurt, 4 tons (8,800 lbs) of Alpage Carí is produced by Flavia, the very talented cheesemaker on the Alp. For the first time, Adopt-an-Alp customers can order the “Raclettozzo”, the raclette version in the Italian speaking part of Switzerland. This is an absolute treat.

> SHOP ALPEGGIO CARI AT THE DELI!

One of four exceptionally rare Swiss selections brought in for the holiday season in partnership with the Adopt an Alp program. This cheese is made by Peter & Annelies Tschudi-Lenzlinger in the mountains surrounding the town of Glarus in the northeastern part of the country. They move their family 4 times during the season as they climb the mountain with their grazing herd.

Lovely limited edition cheese from the mountains of Switzerland. The Glarner Alp cheese is made in the mountains surrounding the town of Glarus in the northeastern part of the country. It’s washed regularly with a brine solution during the aging, both to firm up the natural rind and to develop the flavor of the cheese. The wheels are aged on wooden boards to help them breathe properly during maturing. The flavor is full and delicious, with that magical “nose” that the best Swiss mountain cheeses deliver. Each spring farmers in the mountains walk their herds from lower pastures to the unplowed meadows at high altitude. The cows’ diet up in the mountains is marvelously diverse and the flavor of the milk reflects it. Historically, some of the best mountain cheeses you’ll ever have are Alpage cheeses made in this way. Supplies are limited—it’s a lot of work to take the animals up and back down, and the cheesemakers essentially live in isolation on the mountain tops four months out of the year—they’ve been social-distancing in this way for centuries.

One of four exceptionally rare Swiss selections brought in for the holiday season in partnership with the Adopt an Alp program. Sepp and Andrea Herger-Gysin continue the work that the Bissig Family started generations ago, making truly exceptional summer alpine cheese. Musenalp is situated at roughly 5500ft just below the famous Uri Rothhorn Peak. 10 cows produce the milk that is heated by wood fire to produce this labor intensive love child.

Musenalp consists of about 60 hectares (150 acres) of Alp meadows and stretches from an altitude of 4430 feet a.s.l. to 5800 feet and is located at the foot of the famous Uri Rothorn peak. Musenalp can only be accessed by foot, or with the little open cable car which is essentially the lifeline during transhumance.

During the summer’s peak, when the animals graze on the highest meadows, they are milked under the open sky. The milk is then immediately transported by cable car to the dairy. The operation is simple, small, and very traditional.