ADAPTED FROM ZINGERMAN’S GUIDE TO GOOD EATING, BY ARI WEINZWEIG

Why This Beloved Sweetener is the Bee’s Knees 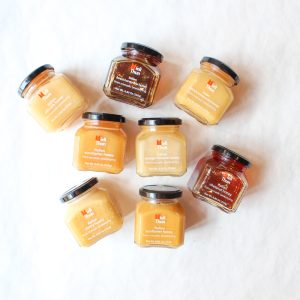 Although honey is sometimes thought of as a homogeneous substance, there are more than three hundred varieties in the world. And no, “plastic bear” is not one of them! Honey starts with the nectar found naturally in flowers, and each flower begets its own varietal. They each produce a distinct varietal—though very few taste like their namesake fruit or flower. For instance, bees that feed on blueberry blossoms make blueberry honey, but that varietal doesn’t taste like blueberries. (Yes, you can no doubt find a jar of blueberry-flavored honey on a store shelf somewhere, but that’s not an authentic varietal– it’s made with commercial clover honey and a flavored extract, not from bees feasting on blueberry blossoms.)

Honey is primarily made up of relatively equal parts glucose and fructose—that’s why it’s sweet! (It also happens to have minerals, vitamins, and amino acids in the mix) The more glucose it has, the more likely it is to have a crystalline, nearly opaque texture. The majority of good varietals are cloudy and naturally crystallized; thick to almost solid, and often completely opaque. There are exceptions though, a few varietals are higher in fructose and thus clearer and runnier, like thyme and tupelo honey. On the other hand, the honey found in a plastic bear is clear primarily due to processing—treatments which also remove much of the honey’s flavor. 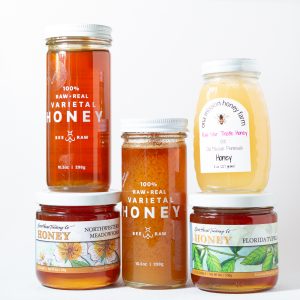 A Bee’s-Eye View of Honey Making

Honey starts with the nectar—a watery solution of sugars, with traces of other substances—found in flowers. It attracts the worker bees, who suck it from the flowers and store it in their nectar sac, then depart for the next flower with bits of pollen on their legs, thereby ensuring pollination of the plant species. (Did you know that bees pollinate roughly 85% of our nation’s food crops?!) A bee has to visit two to three hundred flowers to collect a full load—by the end of the day, a good bee will have brought in a grand total of .03 grams of nectar.

The bee’s body starts concentrating and purifying the nectar even before it returns home. Back at the hive, they transfer the honey to one of the “house bees” that in turn passes it, drop by drop, to another bee on its tongue. They help evaporate water from the liquid by beating their wings to dry and concentrate the nectar, then put the liquid in the comb and seal each cell with a wax capping once there’s less than 20% water content in the honey. It takes 80,000 bee-loads of nectar to make one pound of honey.

To harvest, the full honeycomb frames are removed from the hive and the wax caps are cut off. The honey is removed, strained, and bottled. The less it is handled after it’s been taken from the hive, the higher the quality is likely to be. 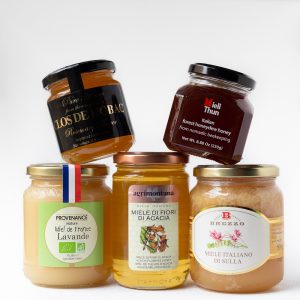 The Sweet History of Honey

The history of honey goes back 120 million years, to when bees adapted to collect pollen and nectar (10 million years before that, bees evolved from wasps!). The first honey that humans ate was from wild bees; Neolithic cave drawings in Spain show honey gatherers clearing hives 12 thousand years ago. From there, humans progressed to making their own hives in hollow lots or pots. By baiting the inside of these artificial hives with a bit of honey, they coaxed the bees into stopping there instead of their original hives.

Bees arrived in America with the early European settlers, and then went, well, wild. American honey hunters took down wild hives, then traded the combs they found inside for food and other necessities. It took bees a couple of hundred years to make it across the continent to the West Coast.

In 1851, Reverend Lorenzo Langstroth discovered that bees do best when they work in a passageway exactly 3/8-inch wide, a distance known to this day as “bee space.” With this breakthrough, he developed the modern beehive—a set of boxes that can be stacked one on top of the other. Within each box, ten or so frames hang 3/8 inch apart. The bees make their comb on these frames. Thanks to Langstroth’s moveable frame hive and three other key innovations of the time—the smoker, comb foundation-maker, and honey extractor— beekeeping became commercially viable in the 19th century.

Although good honey is a completely natural product, made with a minimum of human interference, the kind we eat today is the output of domesticated bees that live in man-made hives. We’ve learned how to arrange the bees’ living patterns so they can produce more than they need to eat—that’s great news for all of us!

> SWEETEN YOUR DAY WITH OUR EXTENSIVE SELECTION!