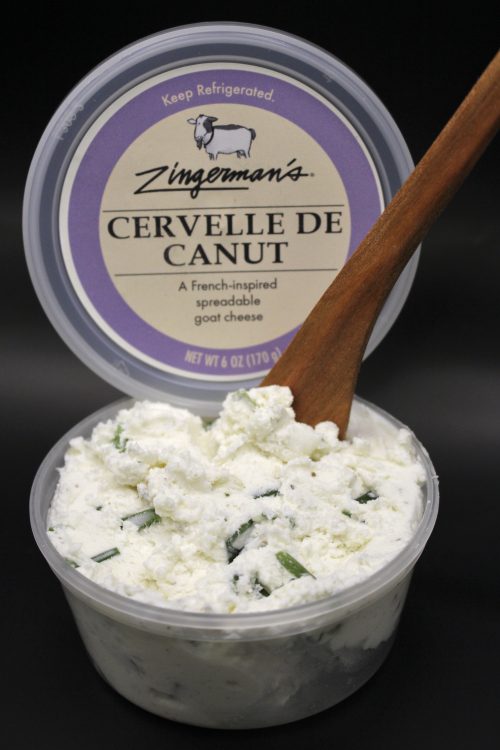 I love little-known local specialties. Many of the most popular foods we work with at Zingerman’s began that way. Balsamic vinegar was barely seen outside of its hometown of Modena up until the 1980s. Hot Chicken was known pretty much only in Nashville up until about 15 years ago. There are thousands of these “neighborhood secrets” around the world waiting to be “discovered.” Thanks to the Creamery’s Jules Mons, who grew up in the French city of Lyon, we now have access to one of those tasty surprises—something that could become as big around Ann Arbor as balsamic vinegar. It’s called Cervelle de Canut.

The literal translation is “silk worker’s brains.” Don’t worry. No silk workers died in the making of it, and the only brains involved are those of the person who first came up with it a few hundred years ago in Lyon. In its home region, Cervelle de Canut is an everyday affair, eaten almost as widely as pimento cheese would be in the American South. Cervelle de Canut is made from the Creamery’s fresh goat cheese, seasoned with olive oil, chopped chives, shallots, black and green peppercorns, and fresh herbs.

The background? Well, one story I read says that the local Lyonnaise rich folks in the 19th century loved to eat lamb brains—it was the haute cuisine of the era. Since the workers at the silk factories couldn’t afford any culinary luxury, they crafted their own version by mixing leftover cheese with inexpensive and easily available ingredients—stuff like shallots, chives, and garlic or whatever they had on hand. The name “Cervelle” came because on the plate the cheese looked a bit like the lamb brains; Canut is French for “silk worker.”

Lyon, at the time, had been the center of the French silk industry for centuries. In 1870, five years after the end of the Civil War, nearly three quarters of Lyon’s business activity was tied to silk. Interestingly, silk workers seem to have a long history with anarchism. In Lyons in 1831, there was a big (25,000 people) silk-workers strike, one that made headlines all over Europe. Following the thread further . . . Paterson, New Jersey, in the later years of the 19th century, became the silk capital of the U.S. and came to be known as the “Lyon of America.” (It was also the hometown of poets William Carlos Williams and Allan Ginsberg, and it was referenced in Bob Dylan’s song about Ruben Carter, “Hurricane.”) New Jersey, it was said, was divided into those who wore silk and those who worked the looms to make it, and there were far more of the latter than the former. In Paterson too, anarchism and silk weaving seemed to attract each other. In June of 1902, Italian-born anarchist Luigi Galleani led a silk workers strike. Eleven years later, in 1913, an even bigger strike took place. And in 1919, a third-year of strikes took place—it was one of the early pieces of what became the violent Red Summer of 1919.

Coming back to the more culinarily uplifting story of Cervelle de Canut, it’s versatile to use and a pleasure to eat. The Cervelle de Canut is lovely in an omelet. Daniel Bouloud suggests thinning it with a bit of yogurt and using it for a salad dressing—awesome idea. Jules makes his richer still by blending in a bit of heavy cream. It’s really good drizzled with a bit of walnut oil, or even olive oil. You can put Cervelle de Canut on a pizza. Or a bagel. Or a Zinglish muffin! Beautiful on a burger (by the way, put your burgers on toasted Zinglish Muffins and you’ll be a happy human). And, of course, in its simple and scrumptious form, with a Bakehouse baguette.

Cervelle de Canut has received 2nd Place in its category by the American Cheese Society! ACS promotes and supports the production of American cheeses, provides education and networking, and encourages the highest standards of safety and sustainability in the world of cheesemaking. We are so thrilled for our partner in business to have won this incredible award!