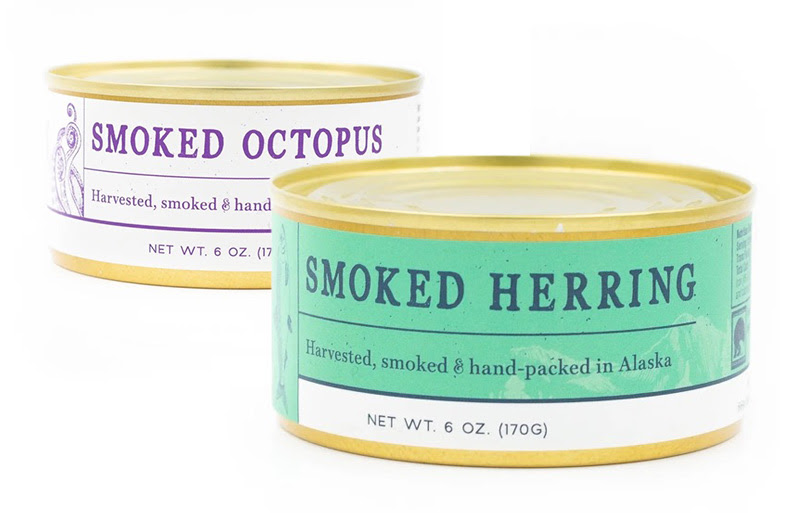 As you may well likely know, I’ve long been a big fan of what people in Spain call conservas, or what in the U.S. has the less poetic name of “tinned fish.” What we’re getting in from Wildfish Cannery is a great addition to our already amazing set of offerings. While it’s a long way from Ann Arbor to Alaska on the map, Wildfish Cannery is in many ways working a parallel course to our own. It was started in 1987, five years after we opened the Deli, with an eye towards excellence in eating, and also to honoring its community. Phyllis Mueller wanted to support local fishermen in the small port town of Klawock by giving them a way to can their freshly caught fish. As the Wildfish folks say, the company has served as an:

economic engine for our small community. Unlike many seafood processing plants around the state, our production team is comprised entirely of local community members from small towns across Prince of Wales Island, traditional lands of the Indigenous Tlingit and Haida Nations.

Thirty-five years down the road, the company is now run by Phyllis’ grandson, Mathew Scaletta, a former chef who moved back up to Alaska to take over the business. Wildfish Cannery, true to its name, uses only wild-caught, sustainable Alaskan seafood harvested by the fishermen and divers from Alaska’s responsibly-managed, community-based fisheries—their friends and neighbors. Right now we have two of their terrific products: Smoked Octopus and Smoked Herring. Each is excellent; ready and waiting for you and me to pop it open whenever we want a little added vitality to our eating.

Wildfish’s Smoked Octopus comes from Dustan and Evie Dickerson, who have been running Raven Bay Seafoods out of Dutch Harbor for decades now. Octopus off the coast of Alaska have typically been what’s called a “by-catch” of cod-fishing—when they come up in nets, they’re most frequently used as bait. When the cod market dropped off a few years ago they decided to connect with Wildfish Cannery. The collaboration resulted in this super tasty smoked octopus. You can put it out for hors d’oeuvres and let people spear it with toothpicks or put it on crackers. I made it into a pasta sauce with Chris Bianco’s amazing Bianco DiNapoli tinned tomatoes. You can leave the pasta out and just turn the dish into what the Wildfish Cannery folks call a smoked cioppino—a brothy, fennel-scented tomato stew with tinned smoked seafood.

The Smoked Herring is super tasty too. Like the octopus, they were originally, basically, a by-product caught for their “caviar.” A fisherman named Warner Lew wanted to change that, to help folks understand that the fish itself is also delicious! Lew lives in the tiny village of Togiak, on the north end of Bristol Bay, where, the Wildfish folks say, he’s been “evangelizing for only 40 or so years on behalf of underutilized Alaskan species.” Lew says, “The herring, [is] underutilized in this country because few people know how to handle it … [or] how to enjoy it.” Working with Wildfish Cannery he’s helping to change that.

You can eat the Smoked Herring as is, or make herring salad with a bit of mayonnaise, minced onion, celery, and parsley. The herrings are what the British would think of as smoked kippers, so they’re terrific when they’re lightly pan-fried and served with scrambled eggs. Put them atop a Caesar salad. The meaty smokiness makes me think it’d be great anywhere you use bacon—I’m gonna try it on a sandwich with lettuce, tomato and mayonnaise. Or in an Alaskan-seafood-adaptation of carbonara, tossed with good raw egg and hot pasta (no cheese). It’s rich in Omega 3 and Vitamin D content, and exceptional umami.

> GET A TASTE OF WILDFISH CANNERY!