Amazing autumn release from the Bakehouse 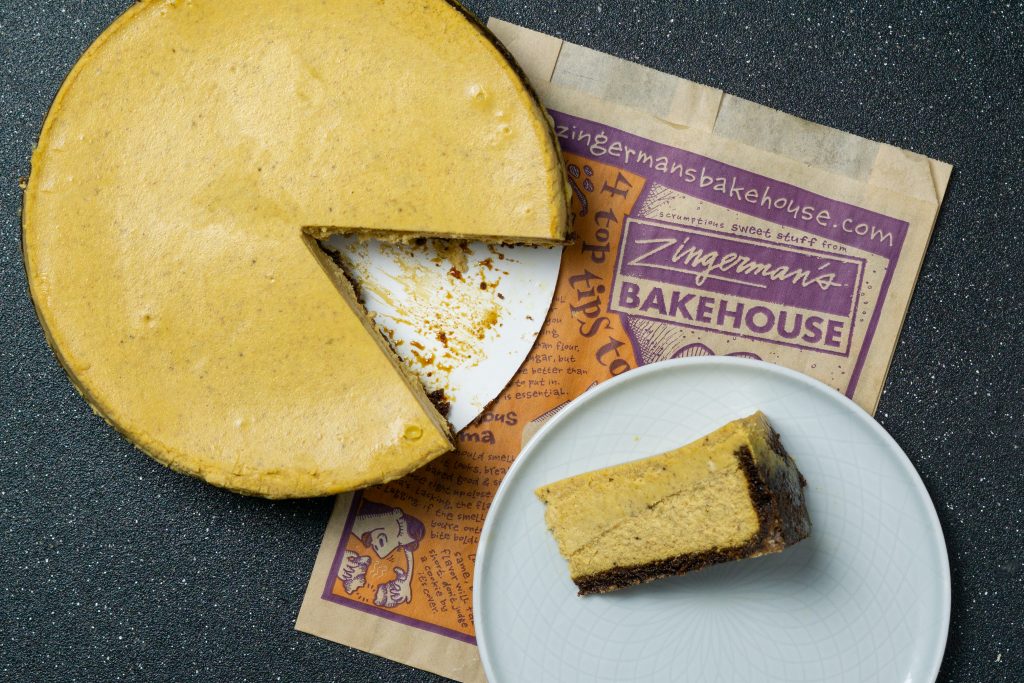 The history of cheesecake in general seems, in rudimentary form, to date back to England in the 15th century. A closer-to-what-we’re-now-used-to form, is likely 18th century in its origins. Its American advancement happened in the late 19th and early 20th centuries. American cream cheese was invented in 1872 (three years after Gandhi and Emma Goldman were born) in the town of Chester, New York by one William Lawrence. One hundred and twenty years later, we started making similar, artisan cream cheese at the Creamery, which then, in turn, went on to become the base of the Bakehouse’s incredible cheesecake. The creaminess of the cream cheese, the earthiness of the pumpkin, and the spicy zip of the ginger cookies in the crust make for some marvelous eating! The pumpkin cheesecake is a study in contrasts: sweet and slightly savory from the cheese, light and substantial at the same time, creamy filling set against the crumbly cookie crust. Once you taste it, it’s hard to stop eating it.

While it often goes unnoticed, I’ve come to believe over the last few years the Pumpkin Cheesecake just might be one of the best baked goods we make! What makes it so good? Each ingredient! The “custard” is made from the Creamery’s handmade, artisan cream cheese and pumpkin purée baked onto a crust that’s made out of one of my favorite Bakehouse cookies—ground up bits of the amazing Ginger Jump Ups. If you want to embellish the “natural” excellence of the Pumpkin Cheesecake, you can do something of a deconstructed pumpkin latte, by sprinkling some finely ground espresso over top. (It’s truly tasty!) Similarly, dark chocolate shavings are a super addition. And in the spirit of the medieval affection for spices, I think it’s also terrific with a little freshly ground Tellicherry black pepper sprinkled on top.

Over the years, the pumpkin cheesecake has quietly and rightfully won an ever-larger legion of loyal fans. It is terrific! As Brad Hedeman, long-time marketer at Mail Order, writes, “The result is redolent with the rich spices of fall, yet light and fluffy like the classic cheesecakes we love. It’s so good, once you taste it you may not even want a pie on your Thanksgiving table.”

Pumpkin Cheesecake is a seasonal item and is available during the Fall.