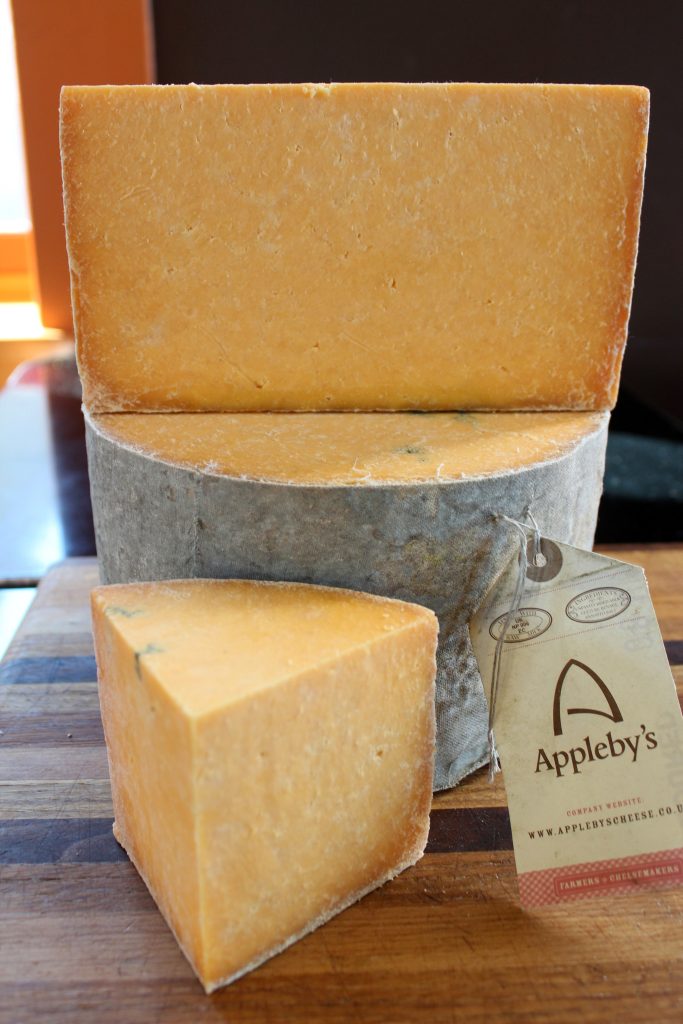 It’s been nearly three decades now that we’ve been selling the Appleby family’s very fine farmhouse Cheshire cheese at the Deli. I first visited Abbey Farm at Hawkstone, where Lucy Appleby was making her now-famous raw milk traditional Cheshire, sometime in the late ’80s. Best I can remember, I kind of just showed up at their centuries-old farmhouse. Remember—in that era, there was no email, no cell phones, no websites. Just books, paper maps, and word-of-mouth! Mrs. Appleby, already in her late sixties at the time, invited me in to watch the cheesemaking, and then later that day to sit in the kitchen for tea, a bit of talking, and some cheese tasting. The Cheshire she was making—true to what had been crafted in the county for so many centuries—was exceptional. It was then, and remains now, one of a kind, little known or understood outside of a handful of folks in the know. Far more Americans know it today than back when I first visited, but it’s still a tiny handful compared to the kind of familiarity of English farmhouse cheddar.

Cheshire had once been the most popular cheese in England, but at the time I knocked on the Appleby’s door, less and less could be found for sale. As Patrick Rance warned in The Great British Cheese Book, published the same year we opened the Deli in 1982, truly traditional cheese was on the verge of going extinct in the U.K. Our friends at Neal’s Yard Dairy, through whom we get these wondrous wheels—selected specifically for us— share the grim story:

By 1717, at least 2600 tons of Cheshire made its way to the capital annually from ports in Liverpool and Chester. Cheshire had become Britain’s first long-distance, commercial cheese, heralded for its crumbly texture and delicious flavour. If the 18th century marked the high-water mark of farmhouse Cheshire cheese production, its descent into obscurity began in the late 19th century. The dramatic growth in consumption of liquid milk, as well as the new railway networks that facilitated its transportation, allowed many farmers to forego the expensive and time-consuming business of cheesemaking. Agricultural depression also precipitated a dramatic fall in the price of cheese. In spite of these momentous changes, there were still around 2000 farms producing Cheshire in 1914.

The advent of the First World War, however, was to have a catastrophic impact. Many cheesemakers were either unwilling or unable to return to their farms once the fighting had ceased, and by 1939 there were only around 400 farms producing Cheshire. The Second World War had equally profound consequences. The rationing program sought to intensify the production of a narrow range of durable cheeses, and grading standards were introduced that forced many Cheshire producers to make a more stable cheese in keeping with government requirements. By the end of the war, only 44 farmhouse Cheshire cheesemakers remained. In view of such challenging market conditions, the story of the Appleby family is quite remarkable.

Lance and Lucy Appleby were married in 1940 and two years later moved to Hawkstone Abbey Farm where their family still lives today. In 1952, they converted the stables for Lucy to begin the same sort of traditional cheesemaking she’d grown up with. In 1982, the Applebys decided to opt-out of the then universally-adhered-to British Milk Marketing Board distribution and decided to sell direct. Instead, Lance loaded a wheel of Lucy’s carefully crafted cheese and took off for London to sell it, knocking, unannounced as I had done at their farmhouse, on one shop door and then another. The first person in the city to buy their cheese was my now long-time friend Randolph Hodgson at Neal’s Yard Dairy, telling me years later, “I had never tasted anything like it before in my life. All the Cheshire cheeses I had been selling just paled in comparison; this was a totally different cheese.” Through Neal’s Yard’s careful selection work, we’ve been buying the Appleby’s Cheshire for nearly 30 years now!

Mrs. Appleby passed away in 2008 at the age of 88. Her memory, and the cheese—now made by her children and grandchildren—remains very close to my heart! As the Telegraph wrote in her obituary: “She was one of the most accomplished cheese-makers of her generation and took a bold and ultimately successful stand against attempts to have unpasteurized cheese-making banned in Britain.” Today, in 2022, 40 years after she made her first wheels by hand at Abbey Farm, Paul and Sarah Appleby, along with cheesemaker Garry Gray, keep the now-three-generation-long tradition alive.

The wheel on the counter at the Deli right now—made on November 25, 2021—is as good as any I’ve ever had. Delicate and delicious, tangy with a touch of tongue-tickling flavor in its finish that I’ve loved for 30 years now! Eat it with apple slices, a hunk of the Detroit Street Sourdough, and a glass of good British ale. It’s outstanding paired with the Apple and Onion Jam from American Spoon. This wheel of Cheshire will sell out quickly, so swing by and snag some soon!